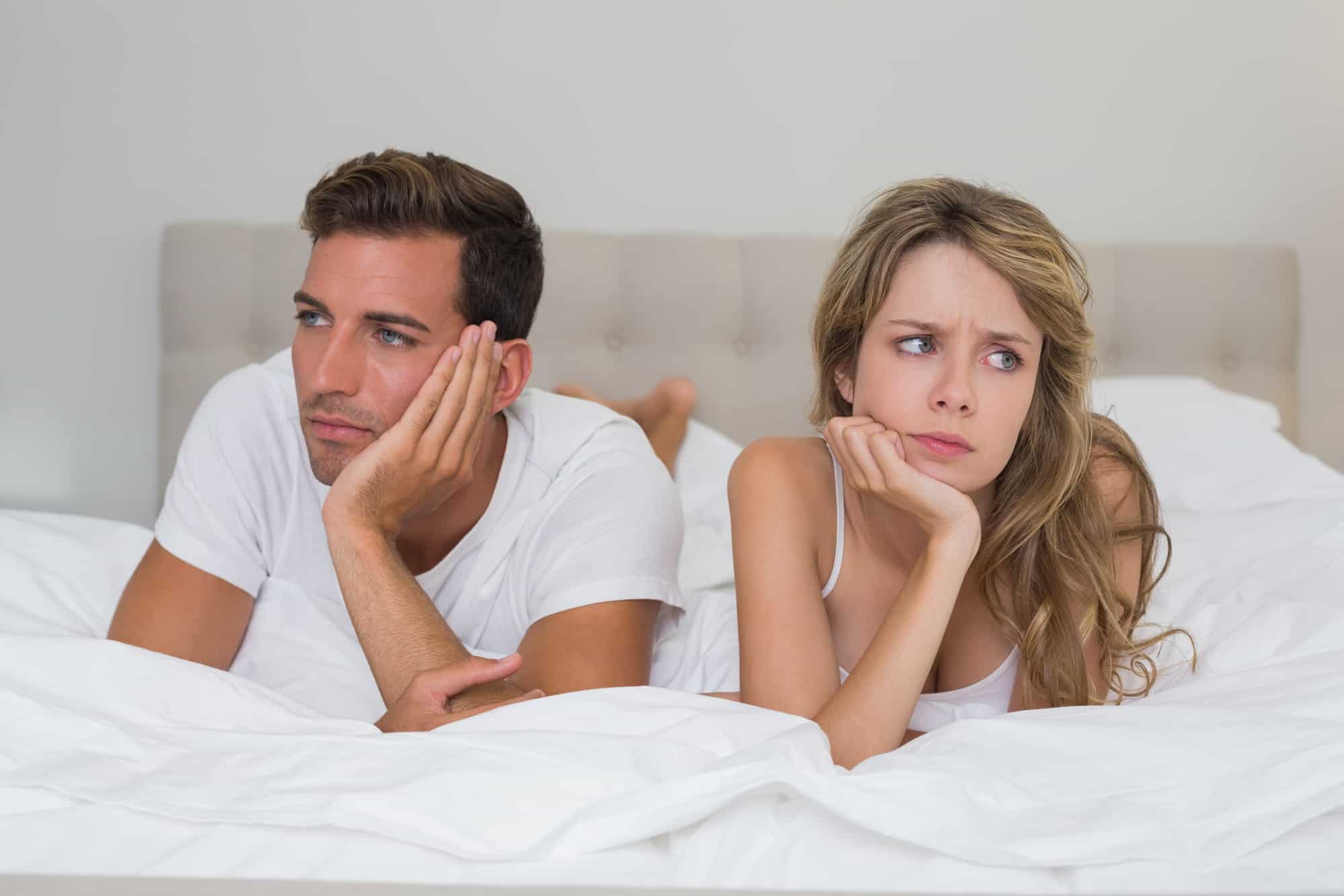 Something Doesn't Feel Right In My Relationship (5+ Worrying Signs)

Call it a gut feeling or plain signs that the eyes can see, most women often have that ‘something doesn’t feel right in my relationship’ moment. It could be something he said or didn’t say, it could be a sly action or something completely unsuspecting. Nevertheless, it's hard to shake that feeling off. I’m here to tell you that you’re often not wrong, but you’re not always completely right either. But, for the most part, if something doesn’t feel right, it's worth exploring.

If your relationship is plagued by eerie feelings, then you need to address it in one way or the other. But you can’t address it if you do not identify the root cause, that’s the main reason I’m here, at the end of this article, you should have a solid idea why your partner seems a bit different.

How To Tell Something Is Wrong In Your Relationship

1. He starts leaving you out of plans

Do you know that new relationship feeling? Everything is right in the universe and almost as if you’re floating on a cloud. Even though you’re obviously a person of your own, you find yourself doing things together and sharing experiences. That’s why it's so weird when your significant other suddenly stops making plans with you. No more date night, no more random hookups, no catching up on shows together. Once this happens, there’s no two ways to put it, something is wrong.

For the most part, it happens when your partner no longer sees a future with you. If the relationship does not feel right, he’ll see no reason to invest any longer. You see, it’s not just the little things like going on dates or having movie nights. If he suddenly doesn’t want to talk about the house you were planning to buy or the number of kids you want to have, then there’s a problem.

2. You fight about everything

A disagreement here and there is nothing to worry about in a relationship. After all, it's impossible to agree on everything. It's only a problem when you argue about everything and anything.

No one wants to lead a problematic life, so once you notice that you’re solving one issue just to dig another, perhaps your relationship has run its course. So if you’re quarreling so much that you can’t seem to catch a break with your partner, there’s a big problem. I hear some of my friends say ‘sometimes I feel like I don’t have a partner’, especially when they are on this page.

Of course, it can come off like that, especially when you expected life with this person to be a lot easier. The truth of the matter is that, unwarranted arguments, are a sign that something is not right. So if you feel or sense that it's time for a reality check, you’re right.

3. Respect is a thing of the past

If it's hard to imagine a time when your partner cared about how his words or actions made you feel, then there’s something wrong in your relationship. At that point, respect is definitely a thing of the past. I don’t know how other people see this, but without that basic respect, relationships can’t survive. It's especially hard for women because they are a bit more sensitive, so blatant acts of disrespect resonate deeper.

So, once he starts making you feel as if your feelings are not valid, it's a major sign that something is just not right. At the end of the day, your relationship should be fostered in an environment where you feel secure and safe enough to express yourself. Further, you should not just express yourself, but equally, do it without the fear of being put down by someone you love.

Sex is a vital part of any relationship, you don’t need a soothsayer to tell you that a sexless relationship will probably tank prematurely. Sure, there are exceptions to every rule, but for the most part, having a healthy sex life is important. If he no longer touches you or initiates sex, then there’s something going on.

Don’t get me wrong, a relationship should not revolve around sex, there should be a balance. But if you used to go at it like rabbits with your partner, and all of a sudden things have changed, it's worth taking a closer look.

It's not only a problem when your partner no longer tries to initiate sex. Once things become awkward and lackluster in the bedroom, then something is definitely amiss in the relationship. Chemistry is just as important as the actual act of sex itself, so if your partner doesn’t put a lot of effort in during the act, it's time to have a serious conversation.

Every romantic relationship is built on the premise that there’s a high degree of closeness between you and your partner. So, once that’s gone it's a major sign that the relationship is on the rocks.

The thing to note here is that in some cases this lack of closeness has nothing to do with the relationship itself. It could be an external factor, from work or any other aspect of his life. Nevertheless, this does not change how much it impacts you and even the other person. This article points out that closeness between people who are romantically involved influences the outcome. If the closeness is maintained, it’ll foster positive feelings and keep things light enough for them to express distaste without making a big deal out of it.

Not only is that a sign of a healthy relationship, but it’s also vital because each person will feel more fulfilled individually. It feels good to win at anything and if you are winning at love, it feels even better.

6. There’s a blatant lack of trust

Trust is a major ingredient to stock up on if you are trying to build a good future with your partner. If it’s not there, you are definitely going to hit a whole lot of snags along the road. So, once it gets to the point where you do not trust the one person you are meant to trust the most, there’s a big problem.

Then if it's vice versa, you will constantly be in a state of worry, wondering what he’s doing or who he is with. I’m going to spell it out clearly, regardless of the situation, it's very far from normal. Don’t hide behind the facade that all couples have to deal with problems. A lack of trust will lead you to the point where you both crash and burn. So, take some time out to address it till you get to the crux of the matter.

What does it mean when you feel like something isn't right?

For the most part, it means your ‘spidey sense’ is tingling, your intuition has kicked in and you’re seeing things in a different light. So, if it doesn’t feel right, then it's probably worth looking into. Relationships have a certain dynamic, and when it's off, there’s no way you won’t feel or sense it.

Why am I not satisfied in my relationship?

There are a number of reasons why you may end up feeling this way, but it all starts at the point where something doesn’t feel right. After that, things start to spiral, one or both of you fall out of love, a partner or both start cheating. Then people stop trying, which leads to gross dissatisfaction.

How do you know if you’re not happy in a relationship?

The first sign is that you lose the will to stop fighting and striving to make the relationship better. At this point you will automatically start to ask yourself, ‘am I happy in my relationship’? After that, both of you dread date nights and spending time together because there’s no joy or peace left.

How do you know if a couple won't last?

It's just one fight and quarrels after the other, and literally anything leads to a disagreement. Besides that, every iota of trust goes down the drain and the relationship just doesn’t feel fresh anymore. To top it all off, there’s no sense of friendship and intimacy anymore, just an emptiness.

Yes, gut feelings or intuition is as real as the earth and sky. In fact, studies have shown that it's possible to measure intuition. When you’re faced with a dilemma or there’s a decision to be made, your gut will kick in and nudge you in the right direction. It's not 100% foolproof, but it pays off to listen most times.

There are so many reasons why something feels off during the course of your relationship. Sometimes, it's in your head, but there are times where you need to explore a bit. With the points above, you’ll have more direction while you get to the root of the issue.

With that said, I hope you got some much-needed insight, and if you have any thoughts, contributions, or contradictions, drop a comment below. Take it up a notch and share this with someone else; sharing is caring.