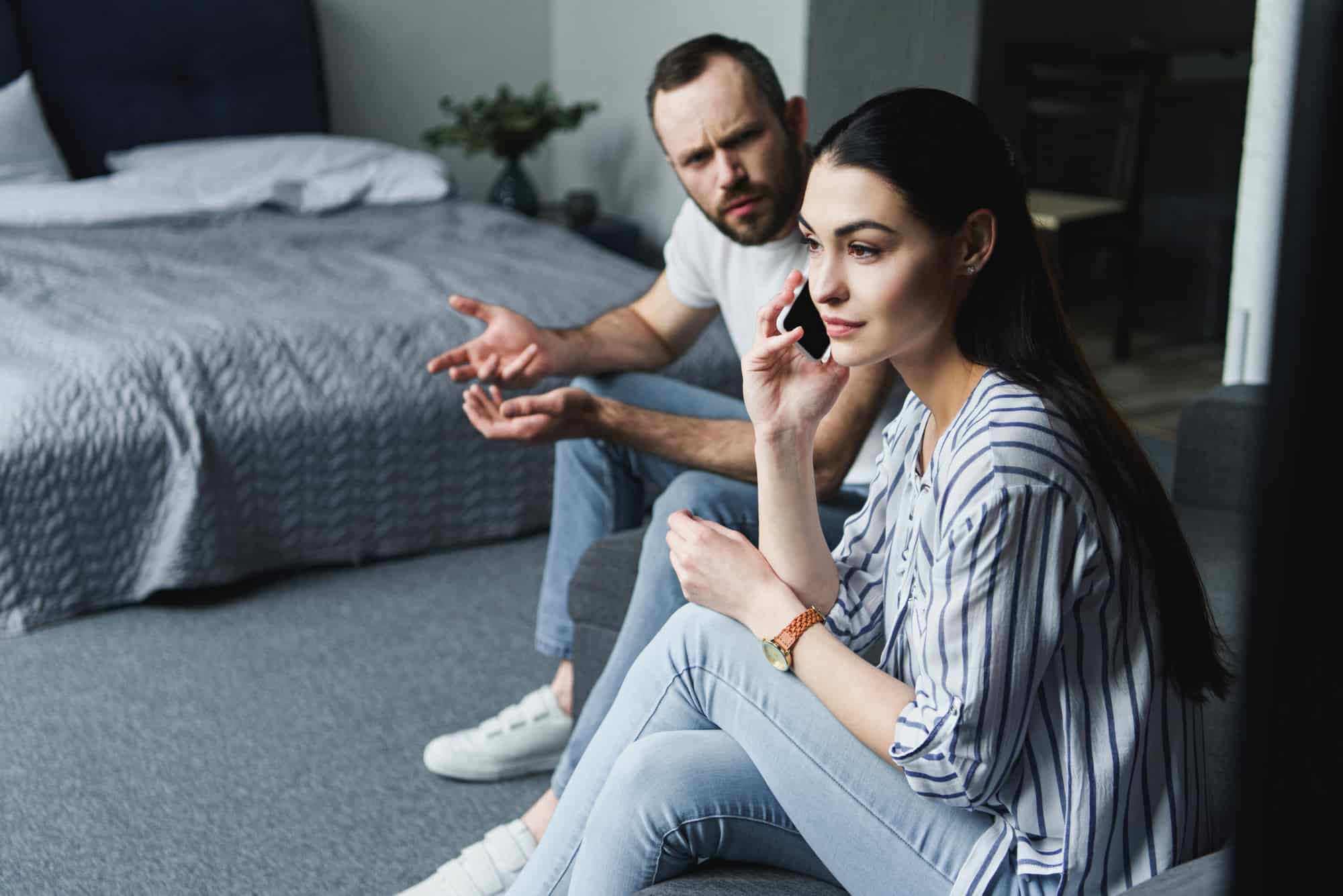 Can you love two people equally? That question is one of the most popularly asked questions of all time. Love is also quite complicated, and one force/value the human race cannot discard.

The most confusing thing about loving someone is that they might not return the feeling, at least not the way you want them to.

You can also have the attention of the most amazing guy ever, yet still feel nothing as good as what you feel for the other person in the picture. When you get caught up in this complicated web, your love life can either take an interesting turn or a downright frustrating one.

Have you ever been in a situation where you seem to love two men at the same time? Are you confused about choosing who to build the rest of your life with? Are two men vying for your love and attention? Then you’re definitely in a love triangle.

Most people would tell you to simply choose the person you love most and ditch the other guy. If life were that easy right? In this situation, you’re dealing with more than one person, and when feelings are involved, you have to be empathetic and strategic.

Well, I may not have all the answers, but I do have some helpful tips on how to manage a love triangle relationship and eventually make a definite decision on who you want to date.

13 Ways To Deal With The Situation

1. Try to figure out what’s happening

The first approach to resolving such cases is to patiently observe the situation. Where is the problem coming from, what are the likely solutions and, which solution do you think are best?

In a love triangle, taking about two steps back would be the wisest thing to do. You can’t be completely objective while trying to choose between two men you obviously care about. It may not be the most satisfying thing to do, but in the long run, you’d be glad you made a sacrifice to be with the person you truly love by thinking things through first.

2. Who do you feel most connected to?

No one goes out of their way to end up in love triangles. There’s usually a cause and effect in such cases. Something must have triggered your attraction to the new guy even though you’re still very much in love with your current man. It could be that you grew close to the new guy during a fight with your man.

Other times, your attraction might not even stem from any controversy as it is very possible to become attracted to someone else without any special reason. The best approach to this situation would be to determine who you feel the most connected to; your first man whom you’ve had deep roots with or, the new guy who you’re thinking of starting over with?

3. Take yourself out of the scenario

This tip is similar to assessing the situation by intentionally confronting the love triangle relationship as if it is happening to someone else. Now, this doesn’t mean you should blank out by pretending this is not your life or zoning out.

What taking yourself out of the scenario means is to create a different picture in your head, where you’re on the other side of the situation. Imagine it’s your friend who is in that situation, what would you advise the person to do?

Yes, people differ but the tips we give are usually a reflection of what we would do in a similar circumstance.

4. What do you feel like doing about the situation?

Your instinct serves you a lot, except you aren’t in tune with it. Sometimes, you just need to go with your gut feeling on a matter even if it seems like torture at the moment.

So ask yourself, what do I want to do in this situation? Except you’re willing to stay in a ménage à trois relationship with two people, your instinct would point you towards the person you should stick with.

A love triangle situation is a delicate one and so, whoever you go to for help has to be someone you trust to protect what you tell them. These people could be your parents, siblings, close relatives, or trusted friends.

They have to be people who care for you, possess a good sense of judgment, have an idea of the men you’re in a love triangle with, and will support you regardless of whatever decision you make eventually.

6. Put yourself in the shoes of the two guys

This might be a difficult thing to do since men are quite different from women. Men think and feel a bit differently from how women do. However, in the end, they are humans with feelings too and, that’s the important thing to focus on.

The good thing is, you have interacted with these guys, and, from your point of view about the way they treat you, you’ll know who has your best interest at heart. Your answer might lie in your knowledge of who wants the best for you.

7. Don’t pretend you’re okay with the way things are, talk about it with the people involved

As much as you want to come to a decision by yourself without any bias from the guys you’re in a love triangle with, you still need to discuss with them what’s going on.

More often than not, people in love triangles are aware of the third party and so, it is not weird to talk about the situation. Pretending you’re fine with the matter is what is weird.

8. Be sincere with yourself as to what is best for everyone

What decision will serve everyone well? While you can make any decision in the heat of the moment, it is important that the decision you make won’t have any negative aftereffects on you or the men involved.

Will moving on with one person devastate the other person? Maybe letting go slowly is better than abruptly cutting off the connection? Or maybe you still want to maintain the triangle for a while until the other person moves on.

9. What exactly is holding you to each guy?

There are times when people want to eat their cake and still have it. You know that you’re only physically attracted to this one guy while the other guy has the kind of stability and security you need but, you choose not to pick one party over the other.

The best decision to make would be to stick with the one helping you become a better person rather than the one living his life with no direction.

10. Your wellbeing should come first

In love triangles, your attention will be divided between two people. You will be overwhelmed and most times, frustrated. Being in a relationship with one guy is stressful enough, how much more with two demanding men?

When all is said and done you’re the most important factor in the equation. That’s because the guys would eventually do what’s best for them too.

11. Be truthful to yourself

Are you naturally an indecisive person? Or you’re just finding it hard telling the person you won’t choose that it won’t work between you two. Here’s the thing, the earlier you figure what you want out, the better. It may feel nice getting attention from both guys, but in the long run, you could end up losing both of them.

So be honest to yourself and really think deeply about the person you love and cherish better, then let the other person know on time that you cannot pursue a relationship with them.

12. Be at peace with whatever decision you go with

After counseling from relatives and experts and thorough discussions with the guys you’re in a love triangle with, you will make a decision. It is best that you’re at peace with the decision you make because if you’re not, you’d continue to dwell on the ‘what ifs’.

If you handle the situation in the best way possible, you would have no regrets. Even if it means that you would have to let go of both men, you need to assure yourself that’s the best you could do.

13. Give the other person space

After you have made your decision and made peace with it, this may be the time to limit your relations with the person you didn't choose. When you pick someone else over another, there’s that sting of rejection that may hurt them for a while. So give them space to heal, and if they still want to be in your life, let it be their choice and timing.

Can a love triangle work?

A love triangle might or might not work depending on the people involved in the scenario. However, most women cannot handle the complications that come with sharing attention and love with two men. So it’s usually better to stick with a one-man-one-woman relationship.

Is a love triangle dangerous?

What happens in a love triangle?

In a love triangle, two people are usually in love with one person and, neither of them is willing to let go of their mutual love. Sometimes, these three people end up in a relationship that’s complicated to other people but seems normal to them.

What does a love triangle mean?

Love triangle means three people in love, hence the triangle. If you’re in a love triangle, you can either be the third wheel that the other two feel they need to enhance their relationship or, you’re the main party who has to share her man with another woman.

What is a fatuous love?

Fatuous love is evident in a relationship whereby the couple has no deep knowledge of each other and are content to go on with the farce. People end up in a fatuous love or relationship because they are trying to keep up with appearances or to keep some people off their backs.

Love triangle situations aren’t the easiest to get out of but if you know what’s best for you, coming to the right decision won’t be that hard to do. Hopefully, the tips in this article have given you an idea of what you can do when caught up in a love triangle. Kindly leave a comment about how helpful this article has been and share it with other people.