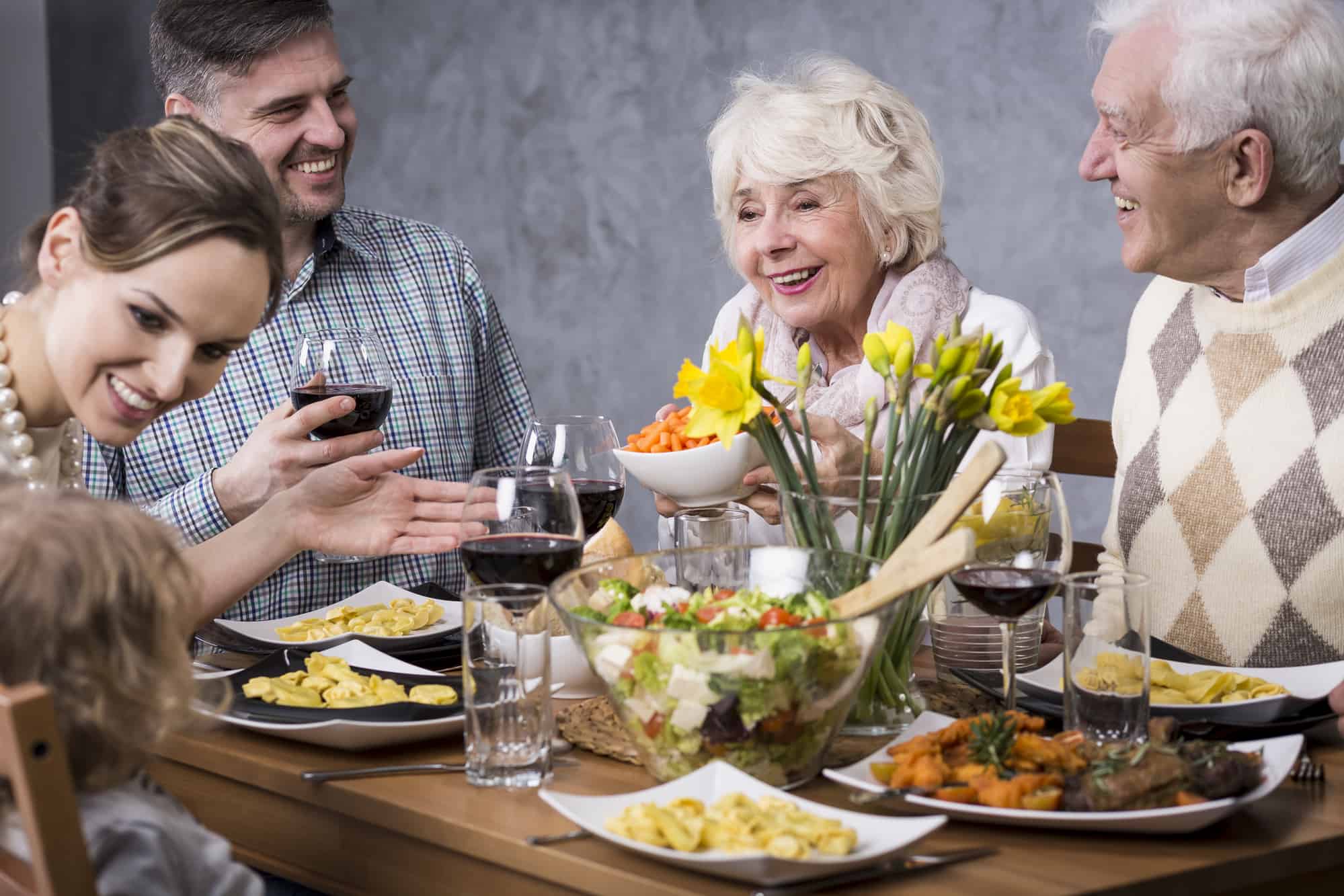 Living with in-laws can be a fun and exciting experience if you're just spending the weekend. Beyond that, you would need tips on how to deal with them when you’re living under the same roof. Not all in-laws are the same, they're either different by culture, beliefs, or values, some are quite loving and easy-going, however, in-laws are mostly older adults, and we can all agree they are usually a handful.

It's cultural in places like India or even some parts of Africa to live with your in-laws. There are also a lot of other reasons why a couple would decide to live with their parents, besides culture. It could be the most affordable option for some couples, moving in with them for health reasons or simply a temporary arrangement while making plans to move.

Whichever it is, you need to be able to coexist peacefully with your in-laws and maintain good family relations as long as you are there. A lot of couples would rather not venture into a situation like this, even though living with in-laws has its benefits.

There’s also the advantage of having experienced people to guide your relationship. Loving in-laws that could help raise the kids if you have any, plus it saves money too if you look at the bigger picture. However, this article is just what you need to read for the tips to help you live with your mother and father in law.

How To Deal With Your In-laws

Setting boundaries, especially with your partner, would help you a lot while living with his parents. Sit him (your partner) down and ask how things work around his house, what his parent's routines are, and build yours around that. You can't go switching things up around the house just because you live there now. It's your mother-in-law’s territory, and you should learn to work around and within her schedule and routine.

It probably already seems unimaginable to walk around someone in your head, but then, it's what you do when you're in their territory. Unless she permits you to switch things up, stick to your boundaries that of course revolve around her already established house rules. It could be that she insists on making dinner for everyone, let her have that, you can pick another meal like lunch or another chore even.

Set boundaries with your partner when at his parents’ house, that gives you both time for yourselves because you might not always have that.

As a woman, it’s normal to feel like it’s ”too much” staying with your mother-in-law, there are so many things to live up to, and you might never get it right according to them. You need to first, recognize the bond between mother and son and accept that you can not come between that.

It's the first step to choosing your battles, believe me, now is the time to see things beyond your point of view.

If you know the dynamic of everyone's relationship, it's easier to avoid them and therefore, any issues that would ignite an argument or confrontation. Understand that she may feel like she is the one who has the interest of her son at heart more, simply because she has known and taken care of him for years, it may be challenging to let go or share. So, excuse yourself from situations like that.

Most in-laws aren’t evil, but it seems that way because they are always trying to weigh-in, give advice, or probably hijack situations without asking, give them a break. They are your family now, treat them how you would treat your parents, and maybe a little nicer for those who don’t treat their parents right.

As a daughter in law, this is the opportunity to try and bond with your new mum, you don’t have to be besties, but try being cordial with her. Parents will be sussy, opinionated, and maybe even a little bossy, but it’s better not to walk into their space with the mindset of ignoring or worse ‘showing them.’

Make yourself useful while living with your in-laws, help them with the utility bills, household chores, picking up groceries, and everything else you can do to help make their lives easier. These people have let you into your home, it might seem like no big deal, but you’re also invading their space and using up their water, electricity, and food.

One way to show appreciation is by taking care of some responsibilities around the house, even though his parents insist they don’t need the help, still try to be resourceful. It could be stressful doing stuff around the house on your own, so don't be afraid to ask for help when you need it though.

As much as you're helping them out don't assume that they would do the same for you. Find a way to agree on shared house chores and let your husband weigh in as well. Avoid the urge to be overly pleasing or to handle everything on your own; it doesn't guarantee that you would get a pat on the back.

As a couple, especially newlyweds, you both need time off with yourselves to enjoy the company of each other and form a strong bond. Privacy might not be handed to you when you are staying with your in-laws; you would have to create it for the benefit of your marriage.

It might be awkward at first to have sex in the same house, especially if it isn't so big and they might hear either of you. A healthy sex life would improve your intimacy and help plan the family you both want to start. Even though it's awkward, you would have to find a way around it; you are married.

Let everyone know your room is out of bounds, and sometimes when you both are in there, you don't want anyone calling in a lot. They ought to respect that both of you are together and allow that time to be enjoyed. Whether they hear you both going at it or not, they have been there and expect it to happen.

Worry less about them and focus on improving intimacy with your partner, you both can even go on dates occasionally, let them know you'd be back a little late then just enjoy yourselves.

5. Be mature and kind

Well, I’d be lying if I say your in-laws won’t upset you, and even though they are older, you have to be the one to act like the bigger person. Times have changed, and the world is evolving as well, your in-laws may still be functioning with the beliefs they had back in the day, which isn't sustainable today.

No one should be bullied or maltreated, especially by family, so always kindly insist on being treated with respect, but try not to be mean or shout back at them. Your mind should be geared towards developing a healthy relationship with them and not severing the ties.

Ensure you talk to your husband as well, so he lets his family know their limits and keeps them in check. Remember, try your best to be kind to them, in Selena's words ”kill them with kindness.”  Only a hardened soul would still be cold to a kind person.

Is it a good idea to live with in-laws?

Whether living with in-laws is a bad idea or not is relative, couples should spend all the time they can with themselves to get to know each other and create their own experiences and living with other people can stop that. Unless you have to live with them, it's not the best idea.

How do you deal with in-laws living with you?

It would be a lot easier to live together if you set respectful boundaries from the first day. Avoid starting a fight or an argument, it's best to communicate your feelings calmly. Be assertive; it shows that you are confident in who you are, and therefore you know what you can tolerate in their house.

Does living with in-laws affect marriage?

Yes, it does, whether it's a positive or negative effect, staying with your husband's family would affect your marriage. There's no neutral standpoint in this, there would be some adjustments you both have to make as a couple living in such an environment as that, and it does take a toll on the marriage.

Why you should never live with your mother in law?

Well, even the thought of it is quite scary, living with your mother in law can be very demanding plus it’s not easy to pull off being a good daughter-in-law and a wife. When it comes to mothers and their sons, everyone else is on rocky ground; it’s not good for your mental health to be put where you’ve got to struggle to mean something.

Who comes first in a marriage, the wife, or the mother?

The wife of course, but that's going to be difficult for your husband to choose if it's over his mom. Situations like this would come up more than once if you're staying with relations and if he keeps putting you second and his mom first, that is a sign you shouldn't be living there.

To live well with your parents-in-law, you need to abide by these tips. If at any point you feel like it's not working out with them still, then perhaps you should consider moving out.

I hope you enjoyed the article, please leave your comments in the box below and share this piece with your friends too.