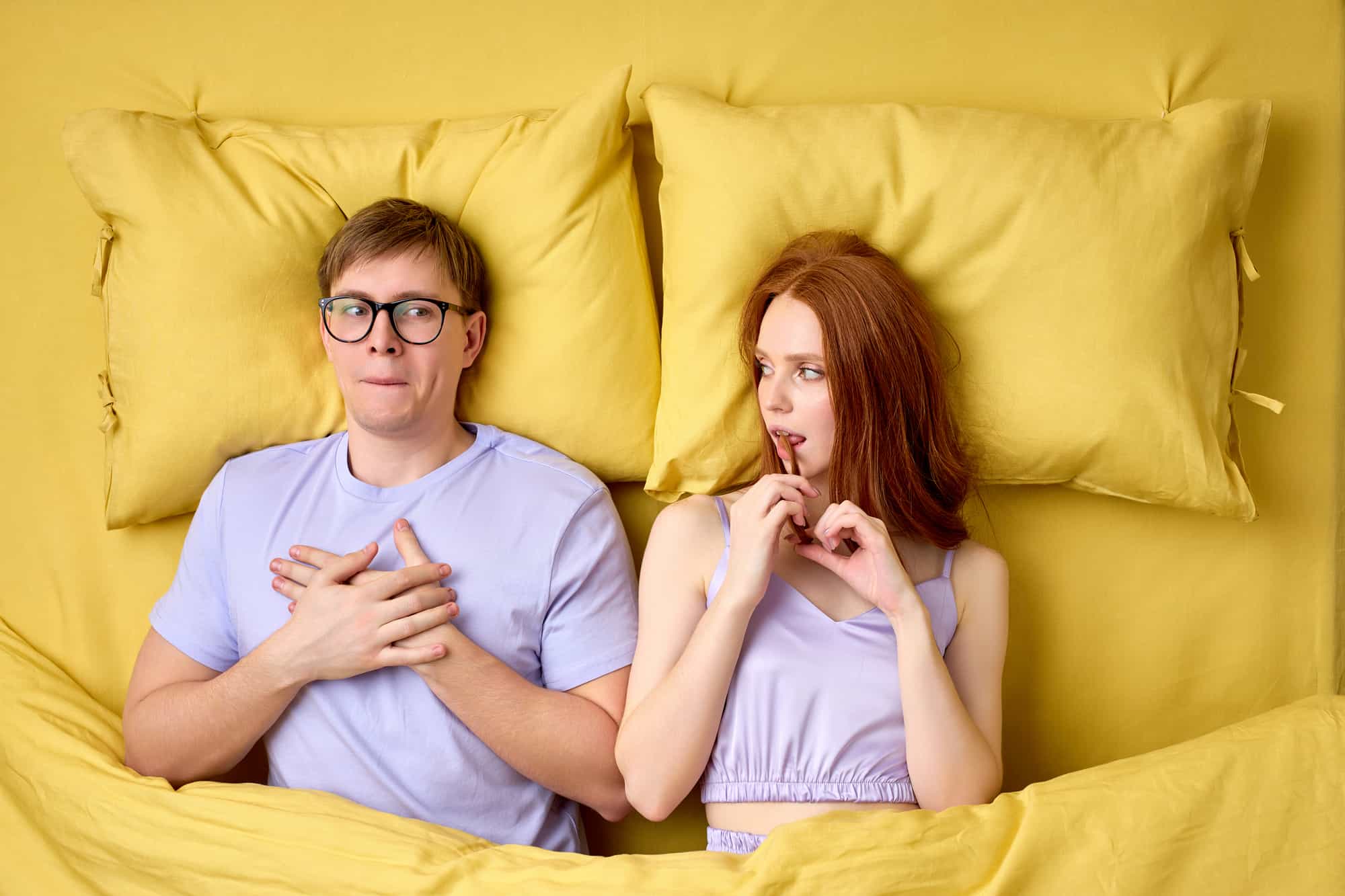 Do you feel your new man is a virgin, and you want to find out?

The truth is, there’s no actual way to find out, neither is there a medical test that can prove if he’s one or not. The only plausible way to tell if your man is a virgin is by asking him directly.

If you’re in a position where you can’t ask, and you need some signs to show if he hasn’t lost his virginity, then you’re in the right place. Though the signs listed here won’t particularly prove he’s a virgin, it will determine whether he’s sexually experienced or not.

It’s important to note this point again, to ensure that you don’t look for any physical signs on his body to determine if he’s a virgin or not. Ultimately, there are no physical signs. Unlike female virgins that have their hymen broken during sexual intercourse, men have none, making it hard to tell.

This may happen because he’s trying to respect you. On the other hand, it may be as a result of his virginity. He’s probably a virgin and lacks the experience to initiate anything. This may be the reason why he’s reluctant to touch you. He might be waiting for you to start things.

If you or your female friends make body contact with him, and he looks displeased, it could indicate that he’s cautious about things, and possibly a virgin. Nonetheless, his dislike for female contact could be for various reasons, such as negative past experiences, self-esteem issues, and more.

5. Hasn’t talked about any experience

If you’ve known the person in question for a while now and he hasn’t still spoken about his past sexual experiences, then he might be a virgin. However, this might not be true for all cases. In a nutshell, talking to someone for a while should reveal a little about them, especially if they have had sex.

If you want to tell if a man is a virgin, you need to actively put him on the spot and turn up the heat. Try to flirt more and possibly seduce him to get a reaction. His body language and other signs will easily reveal if he’s a novice, or experienced on the topic. If he moves like he has no idea of what he’s doing, he probably hasn’t been that intimate yet.

Once you start to flirt and take things further with him, you need to watch his reaction carefully. If he gets nervous, then the few reasons for this include inexperience or an underlying fear of getting intimate. He might also just really want to take things slow.

If he’s avoiding eye contact, it could indicate that he’s uncomfortable about the situation, or perhaps, too tense. On the other hand, he could just be a shy person and is trying to prevent you from seeing that. His discomfort in the situation may or may not be a guarantee that he’s a virgin.

10. He freezes when you touch him

If he freezes when you touch him, it could be for several reasons apart from his virginity. He could like you and is nervous about the relationship’s pace, or is simply excited to be touched by you.

This is a common myth spread about telling if a guy is a virgin or not. Though it may be true in some cases, know that there are virgins who have mastered kissing the right way, while some sexually experienced men haven’t taken out the time to learn it. Such people may be great in bed, but just don’t know how to kiss.

Hastily unfastening a bra can easily show his level of expertise, it makes it an easy way to tell if a man is a virgin or not. On the contrary, the truth is, virgin guys can take the time out to learn certain skills, such as unfastening a bra. Regardless of this, it reveals a certain side to your man.

Confidence in sexual matters comes with a level of expertise. You can easily know virgins when they aren’t confident about what to say or do when it comes to sex. Though this is true, lack of confidence can also spur from a negative sexual experience.

14. Doesn’t know what foreplay is

Research has shown that women prefer much longer foreplay and fully enjoy the sexual experience, rather than just diving into things. As such, some men might take their time to do the needful and pleasure women first. If he doesn’t even know the basics of foreplay, it might indicate that he’s a virgin.

Some virgin guys might know some things about foreplay, but find it hard to execute it properly. In such a situation, the foreplay would just be awkward. If you find yourself in such a situation, it might mean the guy is a virgin, and highly inexperienced.

16. He asks for permission

A man might ask for permission to do things as a form of consent, which can easily be mistaken for virginity. Regardless of this, a virgin wouldn’t be sure of what to do, or what you’d love, and as a result, may ask for permission before proceeding.

17. Doesn’t know where his hands should go

If he doesn’t know where his hands should go and seems a bit confused, it reveals he hasn’t been in such a situation before. It still may not guarantee that he’s a virgin, but it reveals his inexperience. However, this isn’t still proof that his virginity is intact, as some men are just sloppy during love-making.

Caressing a woman’s body is important during foreplay and sex. If a man is touching your body clumsily or too quickly, it shows he’s inexperienced. Also, if there’s no rhythm, flow, or tenderness in his touch, it may probably be his first time, revealing that he’s a virgin.

19. He gets nervous when he sees you naked

Getting comfortable seeing women naked happens with people who are experienced. If he gets nervous, it could mean one of two things: either he’s a virgin, or likes you a lot and is just ecstatic to see you naked. His reaction afterward will explain things better.

A lot of times, men brag about being heroes in bed. The truth is, this isn’t always the case, if he can’t put his mouth where his money is, then he’s probably bluffing. If you feel your energy supersedes that of the man, it might reveal that he’s a novice, or simply can’t handle you in bed.

21. Not sure what about moves

The most important aspect of sexual intercourse is knowing exactly what to do and how to avoid ruining the moment. If a man is constantly pausing and needs you to show him what to do, it indicates he’s inexperienced and could probably be a virgin. However, this doesn’t solely prove his virginity.

Research has shown that most guys want to get to the heat of the action as soon as possible. Experienced guys take their time to ensure their ladies reach maximum satisfaction. On the contrary, first-time sex is always quick and could be uneventful. If he goes too fast, it might indicate that he’s never done it before.

Something that accompanies going too fast is premature ejaculation. If he’s facing this problem, it might reveal that he hasn’t done these things before and finds it hard to contain his excitement.

Many would confuse an ejaculation for an orgasm, but it’s quite different. An orgasm happens when the pelvic contract and delivers intense pleasure, while ejaculation is the release of semen. A man that hasn’t had sexual intercourse might have a quicker orgasm.

If he’s having a hard time getting and keeping an erection, it could be because he’s a virgin and hasn’t mastered a lot of things. This could also occur due to certain psychological and emotional factors, which can dispute this idea. Nonetheless, it’s a sign to consider.

Research has shown that a percentage of men have a tight foreskin, which can bleed upon penetration. It wouldn’t bleed as much as a woman would, but would release just a tiny ounce of blood. If this happens, it might indicate it’s his first time.

The only guaranteed way to know the truth about his virginity is to directly ask him about it. All the above-listed signs aren’t as reliable as the truth from the horse’s mouth, leaving this option as the only viable way to find out.

How do you check if a boy is a virgin or not?

There are various ways to tell. First, he might tell you he’s a virgin.  Or he might appear shy and less confident than other guys. He might also seem very nervous when he is around you or panic at the thought of being alone with you.

How do you know if a boy is a virgin without asking him?

First, he might awkwardly kiss you and will be shy about touching you. While making love, he might ask for permission or seem very unsure about what he is doing.

How will you know if a guy loves you?

A guy who loves you will treat you with respect. He will listen to you attentively and sow great interest and concern in your life. He will also accept all your flaws and be careful not to hurt you.

Do guys feel pain when losing their virginity?

Not necessarily. A penis going in a vagina isn't really painful. However, if the vagina is dry, it might cause some friction on the guy's penis which might cause soreness.

When asked about sex, try to come off as inexperienced. Also, it might help to act shy around guys. You can also do some kegel exercise which might help tighten the vaginal walls and eat a balanced, healthy diet.

Did you enjoy this article? If you feel the need to ask a guy about his virginity, remember to be polite because nobody likes to feel insecure about their sexual experiences. Leave a comment below if you liked this article and share it with friends that need to see this as well.

You May Also Like
Is He Sexually Deprived? (9+ Possible Clues)
2 Comments
What To Do When Your Partner Doesn’t Want To Be Intimate (7+ Helpful Ways)
No Comments
Do Men Get Emotionally Attached After Having Sex? (13 Ways Sex Affects Men Emotionally)
No Comments