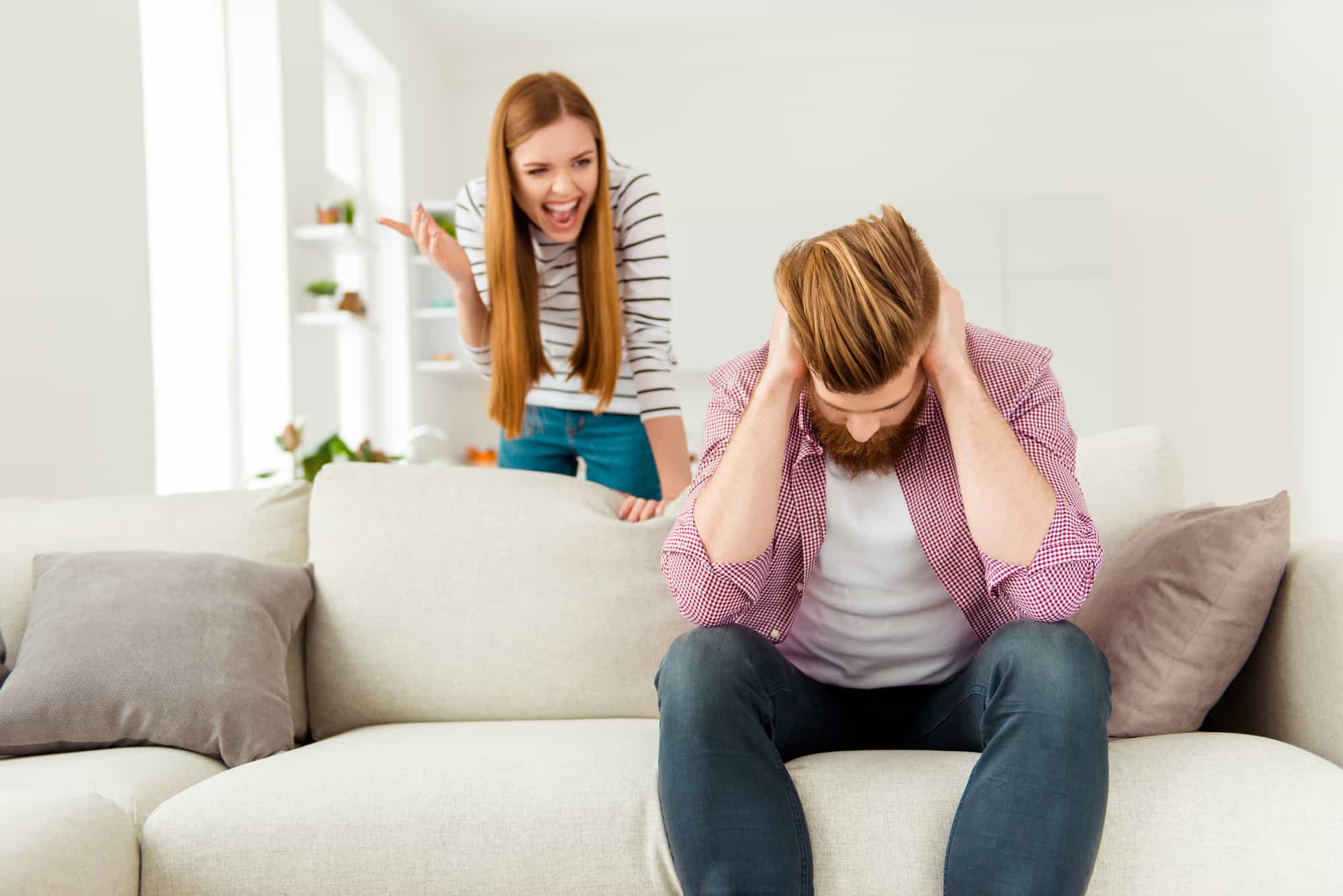 How To Stop Nagging (9 Insightful Tips)

No doubt, it’s very common for men to accuse women of nagging when in a relationship. This is because no one likes to be nagged and hassled every now and then; in fact, we all enjoy and cherish their peace of mind. More so, it is never in any man’s vision to return from a hectic 9-5 job, only to be welcomed by a nagging woman - this drives them crazy.

On the other hand, a lot of women have involuntarily cultivated this habit of nagging at every slight opening. The ironic thing about this behavior is, a lot of women who nag do not even know they do it.

For women, nagging means expressing concern, emotions, disappointment, or dissatisfaction. It’s something we do when we want to ask for something or get things done, but feel unheard or ignored by our partners.

People have already associated nagging behaviors with women, and it’s sad because half of us don’t want to be identified or seen that way. It’s possible you’ve tried to deny this trait yourself, but when more than one person complains about the way you nag, then you know it’s time to make a change.

In this article, I would briefly discuss the possible reasons why women exhibit this behavior towards their partners, and how they can manage the situation and hopefully stop nagging.

As women, we love to be heard, noticed, and paid attention to. More so, we want to feel special, wanted, and pampered most of the time. So, when a man is not doing all or most of these things, it pushes us to become nags.

As a matter of fact, nagging is a form of protest by women who feel like they have to constantly complain about what their spouse isn’t doing well or often enough. Therefore, it is left for the man to adjust his ways, give more attention to his woman, and get peace of mind.

Women, on the other hand, as a means of saving this relationship, may adopt a technique that seems favorable to them, but not to men. It is important to note that most of the time, we mean well when we nag.

3. To express their needs in a relationship

Women, quite unlike men, are not so straight forward when expressing their emotions or grievances. As a matter of fact, men can easily come out straight with what they want to say, but women find that more challenging. Women expect the people they are in a relationship with to know what they want without having to spell it out.

As illogical as this may sound, this is how women are genetically wired. When your man does not behave in the way you want him to, the tendency to nag becomes high, as this is one way of getting his attention.

How To Stop Nagging

1. Don’t make a mountain out of an ant hill

This point may sound easy enough, but I tell you, this is literally where the entire issue starts in the first place. It’s easier said than done, but maybe if you expect a bit less from your spouse, you might not get so disappointed when he fulfills his side of the bargain. Sometimes, we expect so much from our partners, even when we know what type of person they are already.

The moment you ask your partner to do something, try not to be authoritative about it. For instance, you asked him to clear the crumbs from the table after eating, and he leaves without doing. It does not necessarily mean that he doesn’t love or care about you, maybe he’s just more carefree than you are.

It is never a smart move to go over to him and start yelling and ordering him around like he’s a little boy. This only proves that you get upset over little things, and you do not respect your partner.

3. You must not always have it your way

Most of the time women nag, it’s because something they wanted didn’t happen or go their way. Let us not forget that we’re generally awkward at expressing our feelings or grievances to men; so, we tend to act up just to get their attention.

If you wanted a new phone, and you’ve asked him to assist you financially, it is left for him to do so if he is buoyant enough. There is really no wisdom in being a nag simply because he declined to assist. Don’t let entitlement or dissatisfaction ruin your marriage, if you’re earning something, save up and get it yourself, no one should have the power to get you angry over little things.

4. Learn to express yourself

One of the reasons why women nag in relationships is because they do not know how to express themselves to their men. Women rather put up an attitude, and hope he magically figures out what he did wrong or what we want, this is outrightly wrong and immature.

Learn to be clear, honest, and straightforward with what you want; it saves time, energy, and gives your man peace of mind. The whole attitude and nagging just leaves men frustrated and worn-out.

It is important to note that it also has a long-standing effect on the relationship; the more frustrated the man, the higher his chances of zoning out, nobody wants to end up with a nagging woman.

There is just about no relationship problem that communication cannot solve, good communication is very important in any relationship. Instead of nagging, yelling, and leaving the poor guy confused, why not sit him down to talk exhaustively about what you want, or might want.

There is a saying that goes, ‘’behind every angry woman is a guy that is completely ignorant of what he did’’. This is not supposed to be so, you should be able to clearly communicate your feelings and emotions to your partner to avoid confusion.

The tone of voice you use when talking to your partner is important, when the tone is hostile and unfriendly, it becomes nagging. Nobody wants to be yelled at or screamed at, most times, it is not the fact that you are asking repeatedly, but the tone of voice which you are using is what makes it annoying.

A small, mild, calm voice is what men love to hear when talking to their ladies, also, I understand that arguments can get heated and a little out of hand. It is important that you not only watch the tone of your voice but also, be mindful of what you say to him. It is true that you both may settle the fight and makeup afterward, however, some words may never be forgotten.

Can nagging cause depression?

Studies have proven that prolonged nagging from a partner can not only cause depression but can create an unhealthy feeling of low self-esteem for the nagged partner. More so, such a relationship stands a risk of suffering a catastrophic breakdown as the nagged partner begins losing interest, and looks elsewhere for happiness.

Can nagging ruin the relationship?

Nagging frequently in a relationship can lead to the other party becoming unhappy and sick of the relationship. This will then drive him to look for succor elsewhere, and eventually cheat on you. Yes! Nagging can ruin a relationship.

Why does my girlfriend nag so much?

There are a couple of reasons that can be attributed to this unpleasant behavior. One of them is that she might be craving for attention, she wants you to do something, and you are not doing what you ought to do. However, this does not mean she does not love or care about you. Note that this is done only because she needs you to pay more attention and read between the lines.

Nagging can be a prime contributor to unhappiness in marriages, hence, leading to divorce. Nobody wants to end up with a nagging partner, the more you nag, the higher the chances of your partner becoming unhappy in the marriage, hence, pushing him to find happiness elsewhere. It is usually at this juncture that we hear, ‘’ men are trash, men are cheats’’ but nobody cares to ask why he cheated in the first place, not that there’s any excuse for that.

What are the signs of a toxic marriage?

As one of the signs of a toxic marriage, you will notice frequent and prolonged arguments; you consistently ignore and avoid important emotional issues, prolonged silence, and there’s distance between you two. These features, amongst others, signify that the marriage is not in a healthy place. Every good marriage is characterized by good communication, frequent dates and romantic moments, fewer arguments and more of agreements, and most importantly, less nagging.

Women either resort to nagging or put up some awkward attitude when things go wrong, this isn’t right and can lead to unhappiness in the relationship, but it doesn’t have to be so. If we learn how to express ourselves better, deal with built-up anger and stress, and try to ignore certain triggers, you’ll be one step closer to letting this toxic habit go.

If you found this article helpful, please like and share it with your friends, you can also leave a comment below sharing your views on the topic.

You May Also Like
Love vs Infatuation (31 Ways to Tell Which It Is)
No Comments
He Says He Wants To Marry Me But Hasn’t Proposed (7 Reasons This Might Happen)
2 Comments
Do Guys Like Getting Gifts? (7 Reasons Why & How to Buy)
No Comments