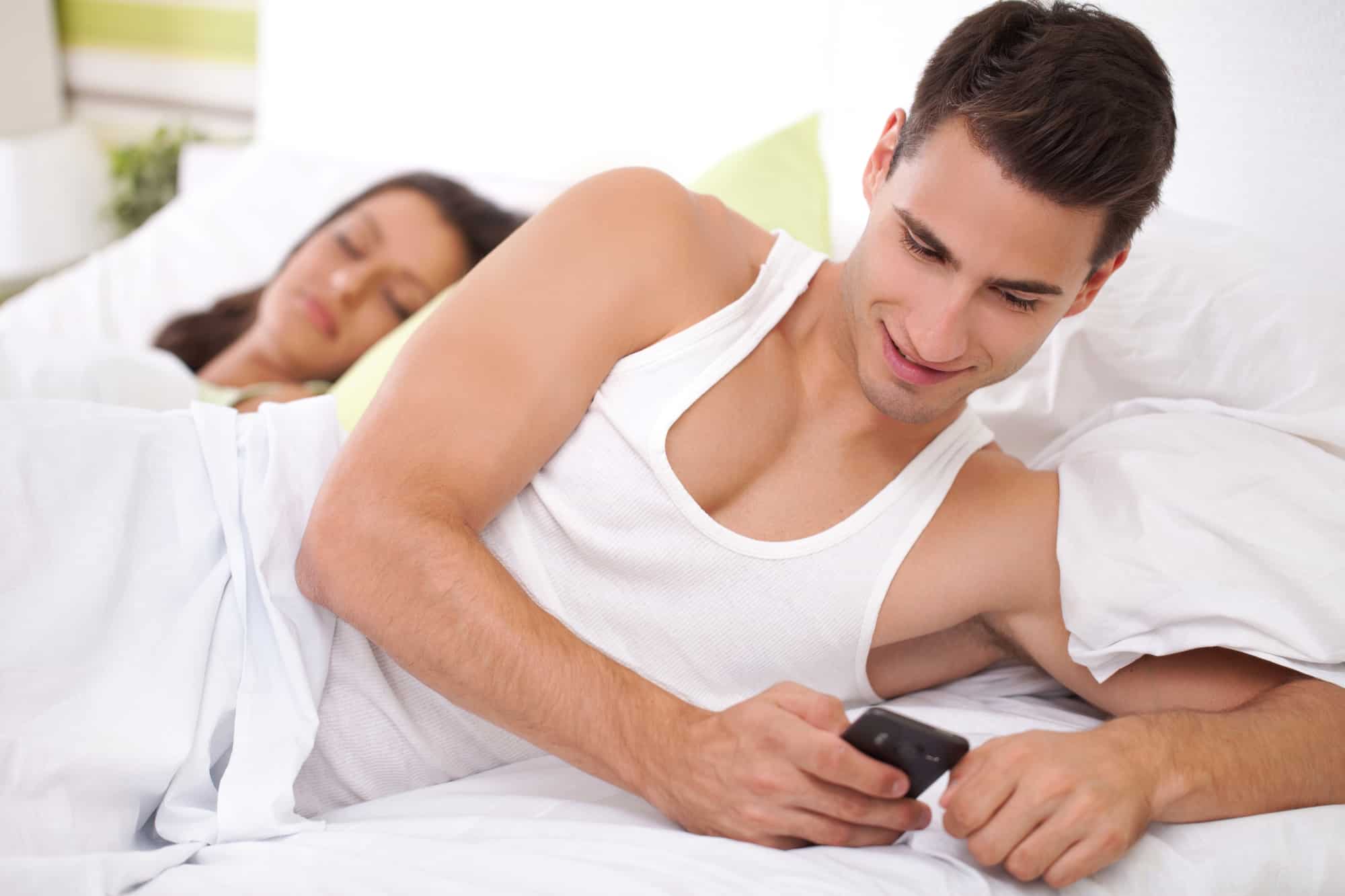 You are here right now reading how you can find out if your boyfriend is cheating on his phone, so I don't have to be psychic to know there's trouble in paradise. What did he do this time? If it's got you surfing the internet for this, you ought to have seen some signs, right?

Has he been more secretive than usual? Did he up the security level of his cell phone? Or did you find an awkward text he quickly brushed over as nothing? Regardless of what sowed the seed of doubt, you now have suspicions that your significant other is cheating, and his actions aren’t helping.

According to infidelity statistics, which covers several years, the gap between men and women who cheat in a relationship is closing, but men are still top of the class. Of course, there are still factors to consider, but statistics also show that women are right about their cheating significant other 85% of the time.

If you really want to know if your boyfriend is truly cheating, text messages on his phone are a ripe crime scene waiting to be harvested. However, there are more ways to find out. More so, while I'm all for gathering evidence, prepare to accept your L and move on if you find nothing.

How Will I Know If He Is Cheating On His Phone?

1. Go through his social media

In most cases, we tend to have platforms we frequent, Twitter, Instagram, Facebook, Whatsapp, Snapchat, among the most popular ones. Someone who is cheating in this age will likely connect with the mistress on one of these platforms. So, I'm assuming you have managed to keep it together to this point and have been acting the naïve girlfriend until you know more.

What you want to do is get his phone unlocked for a few minutes, and dig in. Go through the DMs of the platform he frequents, where all the juice you need will be waiting. However, some guys are meticulous, so he may not leave his conversation with the person he’s cheating with lying around - he knows your sneaky self will find them.

Fret not, just scroll through the one he has with his closest friend, that's where the real deal usually is anyway. But beyond only the Direct Messages, other features like his likes and comments can also reveal plenty, so make sure to find those as well.

2. Install a tracker on his cell phone

If you are like me, going through your boyfriend's phone isn't something you jump at. Nonetheless, they say all's fair in love and war, once cheating enters the equation, it's always better to be sure. What better way to do that than when you have undeniable access to his phone through yours?

The con to my first tip is that you may not get to be alone with his phone long enough to gather actionable intel. And since the longer you have access, the better your odds, this way is more productive.

There are a ton of spying applications for both iOS and Android systems, so you can definitely get one irrespective of the type of phone you use. Unfortunately, most of them will still require you to get your phone for a brief moment. I don't want to mention any name, but I hear mSpy comes highly recommended for finding out cheating partners.

Once your spy app is successfully installed, all you have to do is sign up with your details, and you can begin to see what he sees. His text messages, call logs, social media DMs, real-time location, the list goes on.

First, why does your boyfriend still use dating sites? That is several shades of wrong. It's like he's telling you there might still be someone else, so don't put all your eggs on me or something. Truth is, it's not always that easy to catch a cheat. If he's truly sleeping around using dating sites, he won't leave breadcrumbs for you to find.

If he's so confident that he leaves the sites or apps on his phone, he's made your work easier – if he stays signed in. However, the more discreet ones still have a tell. Scroll through his browsing history, and you will find the site he frequents.

If he's someone like me who likes to save login details, it's your lucky day. If not, you can also input his email address and click forgot password, this is a bit risky because the phone might be with him when the email enters.

Speaking of, his inbox, spam, or trash bin will most likely have messages from the dating site he has a subscription on. You can get the relevant details and try the password reset while the phone is still with you.

Affairs are exciting, it's why being unusually glued to your phone is a way of telling if there's a new person in your life. While the conversation is getting shorter with you, he is literally always on his phone, chatting with god knows who. This hurts because complaining too much about this can get you labeled needy or a nag.

The good thing is that people in love (lust?) get sloppy. While he's still infatuated with the new girl, their conversation will likely involve pictures and video sharing. Now, the safe thing to do would be to delete those potentially incriminating pieces of evidence. But cheating men don't play safe, they play smart, or so they believe.

He probably wants to get a feel of his mistress around him when he can't physically be with her. So, instead of deleting the thirst traps, he will find a way to keep them instead while at the same time making sure you don't stumble on them in his gallery. Enter phone vault.

I blame technology for making things like this easy for cheats, but it also helps us find them, so I can't complain. These vault apps have different names, but they essentially do the same thing; hide media, texts, apps, etc. The catch: they are usually heavily protected, so you may have his phone password and still be unable to access it without his fingerprint. But if you do manage to get in, voila detective!

I know we already mentioned the location tip above, but this is different. How, you ask? Because if you play your game well, you can even get his consent for this one. Again, I'll assume you haven't given him any reason to suspect that you suspect him so far. If you have and he's already acting evasive/defensive around you, you might want to skip this option altogether.

If you haven't asked to go through his call logs during your time together or share an awkward eye contact with him when he's being weird, then you are good. That said, the problem with these tracking websites is that you don't know which one to trust. Once you permit the wrong one on your boyfriend's phone, it might end up costing him more sensitive information than you bargained for.

It's bad enough that all this risk may be for nothing, imagine his credit card details get stolen or worse, and it turns out he wasn't even cheating. I wouldn't want to have that conversation, and that's why I recommend the google maps idea. Sell it to him as a safety idea – especially if he travels a lot – and offer to share your real-time location with him.

Of course, you can also sneak this behind his back, but Google will remind him at intervals that he's sharing his location, and you become a stalker. If he accepts but then later turns it off, you'd be notified as well, then you'd have a valid reason to ask him why.

How can I find out if my bf is cheating?

Gone are the days when we only had intuition and private investigators to nab a cheating boyfriend. These days, once you catch a whiff of infidelity from your partner, you can easily help yourself to any of the tons of tracking applications like these available on the internet.

What do you do if you suspect your boyfriend is cheating?

I say gather your intel first, then strike. If you've seen a few signs that suggest he might be cheating, find out more just to be sure. These signs could be anything from an evasive attitude to spendings he can't account for. What you find will determine your next course of action between having a conversation with him, confronting him, or straight up dumping him.

How do you tell if your boyfriend is hiding something on his phone?

If he becomes more obsessed with his phone than usual, something might be up. You will notice he keeps the phone locked and with him always. Such a person would never leave you alone with their phone knowing what you can find. He gets agitated when he sees the phone in your hands.

How can you tell if your boyfriend lies to you?

It's in the details. If your boyfriend lies to you often enough, he will begin to contradict himself. If he takes too long to respond when you talk to him, that might be a red flag. Also, unless your boyfriend is an excellent actor, the words of a liar hardly ever match their other expressions.

Can I see my boyfriend’s Snapchats?

What are you looking for and how far you are willing to go to see them? If you're not too pressed, you can wait until he posts his snaps for the rest of the world. However, if you prefer to take the less noble route, you could get his login details or get a spy app for Snapchat.

A gentle reminder that apart from the invasion of privacy being morally corrupt, it is not exactly legal in every country. But it is what it is. This was kind of fun to write, but will it work? Will, you will find out by taking action.

Comment below if you've ever tried any of my methods and how it went. Also, share the article, I feel like a girl out there could use the tricks.

You May Also Like
How Do I Find Out What Websites My Husband Is On? (10 Effective Ways)
7 Comments
Is He Seeing Someone Else (5 Undeniable Signs)
1 Comment
Why Does My Husband Accuse Me Of Cheating? (18 Little-Known Reasons)
2 Comments