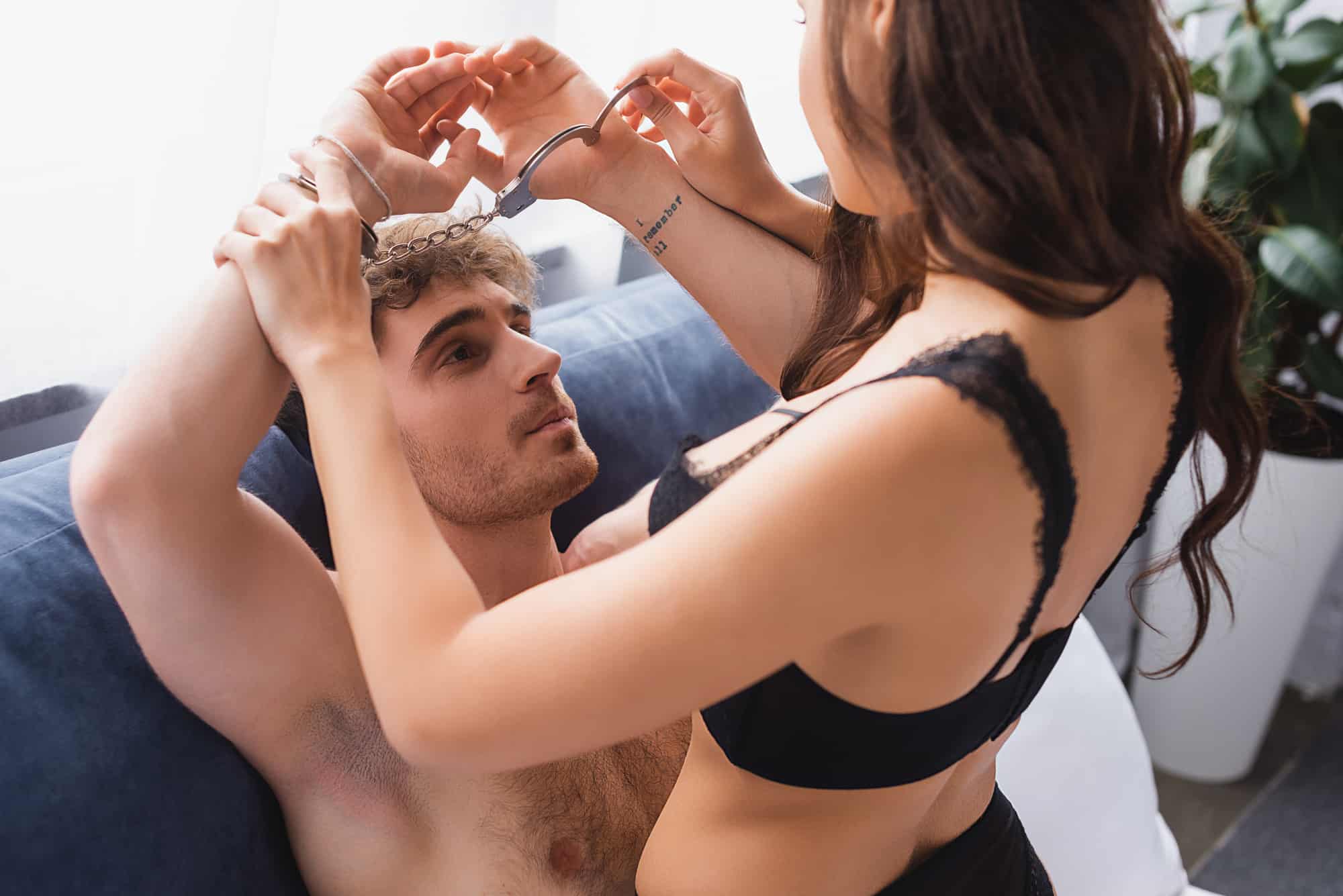 How To Dominate Your Man (13 Surefire Ways)

You may feel like your man is too dominant sexually or just in general, and maybe you’re ready to take control of things to make them more in your favor. Maybe you’re tired of being treated a certain way. Alternatively, you may be in the position where your partner has requested that you take the lead more often.

For example, in the show Shameless, one of the women requests that her man start being more dominant in the bedroom, but it’s a difficult adjustment. He doesn’t quite grasp the concept and has to try time and time again to get it right.

Spoiler alert: At the end of the episode, he discovers that complaining about the different things she does works in his favor.

If you are ready to take in the reins and lead your relationship, look no further because this article will have the secrets you need to know how to be dominating with your man!

One of the many definitions you can read about online basically explains that dominating is all about influencing or controlling another person. To most people, dominating is all about taking control in the relationship or in their sex life. Often, it is assumed that domination involves whips, chains, handcuffs, sex toys, spanking, or something similar. That isn’t always the case, though.

You don’t have to boss your partner around or spank them when you have sex; instead, start small. Just make a few decisions or have an opinion on what the two of you will eat for dinner. Taking small steps like this will show your partner that you aren’t a doormat, but instead, you have a strong opinion and would like your voice to be heard more often.

The Benefits Of Dominating

For some partners, being dominant is an important part of their everyday life; in other words, that’s just how they are; they don’t enjoy being bossed around or told what to do. Instead, they prefer to be the person bossing their partner around or telling them what to do. If you are in a relationship like this, you may be looking for a change.

Often, making small changes, as mentioned above, can give you more peace in your life, because you may have things go your way more often. You may also see something positive evolve in your partner as he or she adjusts to your new attitude. They may, in fact, find it appealing that you have taken a stance on things when you previously just went with the flow.

Another benefit of domination is seen in bed, as partners often switch roles in an effort to see which needs are being met or not being met by their partner. Given permission to do so, the more submissive partner may feel more comfortable talking about their wants, desires, hopes, and dreams in bed when normally he or she keeps silent regarding these matters.

The Ways that You Can Dominate

With the right tone of voice, you can get him to give you your way more often than not. Consider telling him what to do so that you can get what you want and to show dominance. By bossing him around, you are showing that you can illustrate confidence and significance if those are the characteristics you are looking for.

Be careful with this act of dominance, because there is a point where you may be taking it too far. If your man has requested you to be more dominant in your relationship, this is a simple means by which you can accomplish this. Say things like, “You must” or “You need to” so that you can show you mean business in your new behavior.

Oh, yes! Men do love this even if they’ll never admit it. Just make him wait longer than usual before you have sex; this will make him want you so much more than before. He’ll be wondering what in the world you have hidden up your sleeve, why you are making him wait so long to take him with you to bed, and what you have in store for him.

If you do decide to use this tactic, make sure you have a plan for what you’re going to do when you do finally give in because you can’t keep this up forever. At some point, you’ll have to give him something, so make certain that it’s something really tasty! Consider some whipped cream and strawberries or a scavenger hunt in your home!

This one may sound pretty obvious, but if you’re looking to keep your man in his place, it’s time for you to take charge and start making some decisions on your own. Just make it a point to pick out what the two of you will have for dinner tonight and don’t take NO for an answer. This is your time to shine, as you illustrate, you aren’t afraid to take control.

If you are really looking to establish dominance in your relationship, one of the best ways that you can do this is to act as though you are right and he’s wrong. This may sound a little crazy, but hear me out. You are trying to establish power in the relationship, right? What better way to do this than to show you know what’s best!

You don’t have to be mean about it; just look for an opportunity to come out on top. If you notice his grammar is off or he’s eating with the wrong fork, there’s nothing wrong with pointing that out to show you aren’t afraid to speak your mind.

Hit the lingerie shop and spend a paycheck; find what makes you feel like the most beautiful woman in the world; then, deck yourself out with the hair, makeup, the works. Next, insist that he gets naked; what better method to get him to feel vulnerable than to make him naked? Put him on the offensive, and watch him squirm while you look hot!

This tactic may seem a bit obvious, but if you’ve never tried it, you really should. Tying him up to the bedpost will show that you mean business in your sex life now. It’s time for him to be at your beck and call because you are in complete control of your partner when you have him tied up! After all, who else is he going to turn to untie him?

When you two are making love, does it always seem natural for him to take the lead and do it in the manner that pleases him the most? Instead of doing it in the same manner that you always do, get on top and ride him like you know exactly what you want (even if you are still a little unsure)!

Order your partner to give you an orgasm with his hands or mouth - whatever pleases you the most. Insist that he do it again and again until you have been completely satisfied. This is a surefire method for showing him that you are the head of the relationship - at least in the bedroom!

That’s right; break out the oils, soft music, and warm towels because it’s time for him to show you what feels good. Better yet - make him get all of that prepared for you while you relax in a candlelit room, waiting to be pampered. Use this as an opportunity to tell him what you think feels good and be certain that he follows your instructions!

10. Turn Him Into Your Slave

Pretend you are a princess, and he is your servant or something like that - whatever your fantasy may be. Just tell him what you want to eat, drink, and entertain you, and make sure that your wish is his command! What better way to show him that you’re in charge?

Surprisingly, some guys are hesitant to say what they want when it comes to sex because they are worried you will think less of them or something like that. Sometimes, you just have to do something to determine whether they like it or not. Try spanking him a little or pulling his hair as the two of you have sex! You may be surprised at the result!

How can you best show dominance? Consider turning your nose up to stuff that you would normally be agreeable about. Show dissatisfaction, being high maintenance, getting angry, being annoyed, or complaining more. Just adjusting your attitude like this will put you in control of the relationship and will definitely show dominance.

Edging is all about teasing until you almost reach an orgasm but stopping before that happens. It’s a great way to build stamina and can certainly make you the master in the bedroom if you are the one doing the controlling!

Being a dominating female doesn’t mean you have to tie him up or make him beg for mercy. Just go with the flow by having some fun with it.

Are you an expert at dominating? What secrets do you have? I’d love to hear from you. Please leave a comment!

3 comments on “How To Dominate Your Man (13 Surefire Ways)”

You May Also Like
What Is Spectatoring And How To Stop It? (5 Guilty Reasons)
No Comments
227 Sexually Intimate Questions For Couples
No Comments
Things Guys Like In Bed But Won’t Ask For (21 Things Men Secretly Desire In Bed)
1 Comment