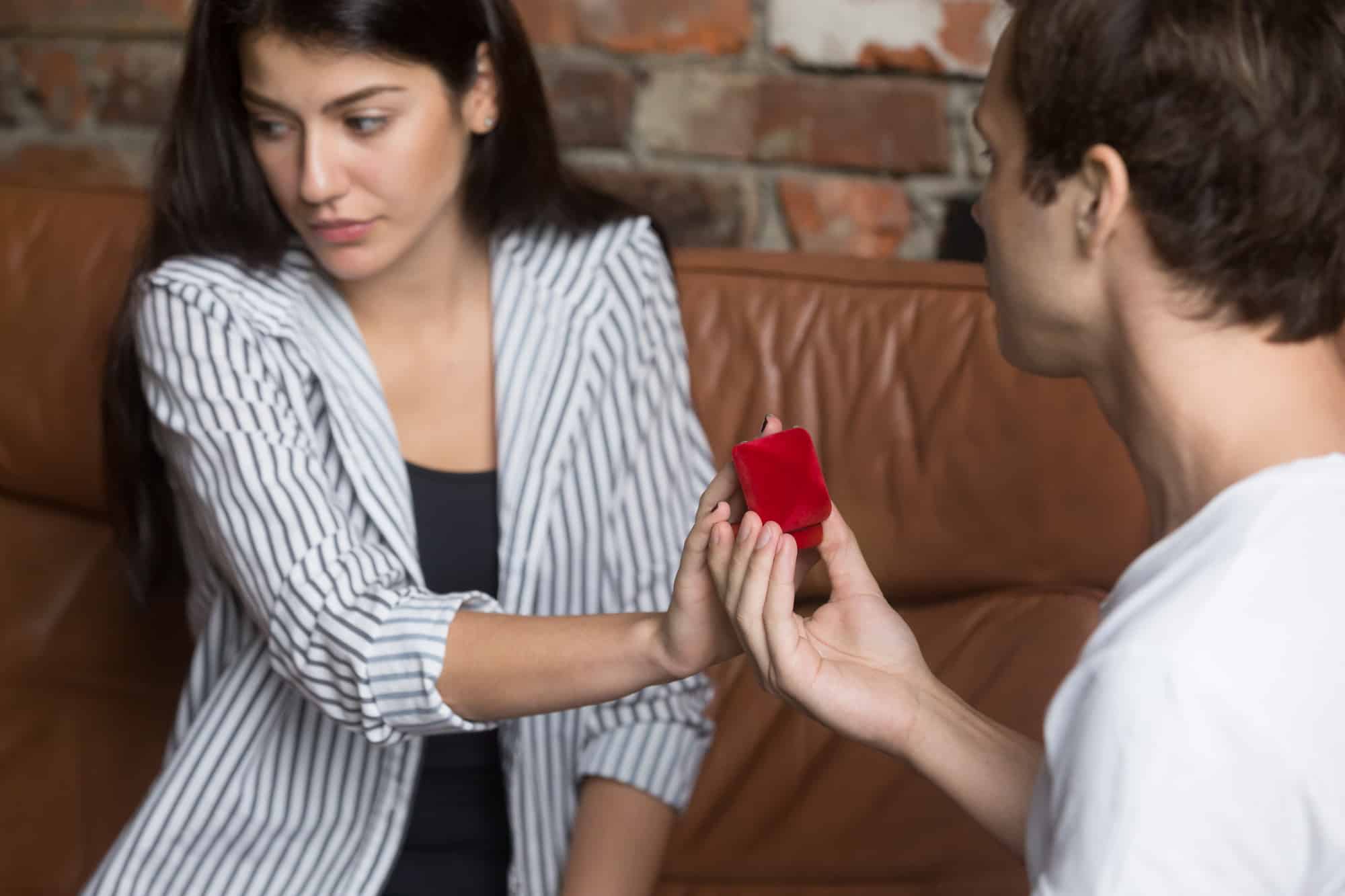 Calling Off An Engagement (15 Things To Consider)

It is one thing to break up a relationship still while dating, but to call off the wedding brings another level of pain, complications, and disappointment.

At this stage, the couples aren’t the only ones who will be affected by the fallout. Breaking off an engagement affects the parents, family members, and friends who have contributed their time, energy, and even money to the wedding ceremony.

While the situation is extremely painful and awkward, it is usually best if the couple go their separate ways instead of trying to save face and marry anyway. That being said, it’s vital to ask what makes two people in love suddenly feel like they can’t get married anymore? Is it okay to call things off when you’re about getting married?

There are several reasons why people suddenly feel they made the wrong decision, and it’s actually better to call things off instead of getting married.

The real question, however, is how do you break the news to your partner when you realize you can’t go on with the marriage plans?

Well, this article will help you break off engagement in the least painful way that will have you and your ex-fiancé parting ways amicably.

15 Best Ways Of Calling Off An Engagement

There is no point dragging out the inevitable. Real-life is not like the movies where the bride leaves her groom at the altar and runs off in her billowing white gown to meet the man she truly loves. If you can’t go ahead with the ceremony, end it before preparation goes too far.

It won’t be fair to him, his family, and yours if you wait too long before you pull the rug from under his feet. If you feel like you can’t spend your life with this guy, let him know on time.

One of the meanest things you can ever do is calling off an engagement over the phone or telling someone else to do it. It not only makes you a coward but also insensitive. Except for cases whereby abuse is involved and you’re trying to protect yourself, then you should accord your partner the respect he deserves and end the relationship in person.

Will it be hard? Yes. Will it make you feel better? Probably not but it has to be done the right way if you don’t want to feel shitty about yourself right after. Also, consider your partner's feelings, he needs to know why you can’t do life with him, and if it’s just the timing or something more terminal.

The truth hurts but it is for the best in a situation like this. You wanted to spend your life with this person, meaning you’ve been mostly sincere with him all through courtship. When your feelings change, it is best for you to be just as sincere too. It saves both parties time and reduces your anxiety about breaking things up.

4. Give The Exact Reason For Breaking Up

Don’t give the wrong reason for breaking up or leave your soon-to-be-ex confused as to why you’re breaking up with him. Breaking up usually leaves loose ends in our hearts and many people go years without the proper closure they need.

You don’t want to be that person who leaves the guy tormented, confused, and broken-hearted. He deserves the right to know why you think things won’t work, and a precise explanation so he can get over it and move on as well.

It is understandable that you are feeling horrible and looking for who to blame for the decision you’re about to make, but please don’t. You’re human and you can make mistakes. That doesn’t make you a bad person, just someone who changed her mind for good reasons.

Marriage is a life long decision, even though many people go into it just for the mere fun of it. However, if you have realized that maybe you said yes too soon, don’t try to blame it on pressure from family, friends, or even your partner. Just clearly state why you can’t go on with the marriage plans.

You would agree that he deserved to be heard too after you drop the bomb on him. Hear what he has to say even if he is trying to give you reasons to stay. Listen to him but stand by your decision if his reasons do not assure you that you can go on with the relationship. It will hurt for both of you but it needs to be done.

Leaving room for future communication after breaking up is a deceptive, confusing, and painful way of living. You don’t expect that your feelings for him would be completely gone immediately, neither would his. So, why keep in contact if you won’t be in his life as his wife? A clean break signifies a new start but neither of you will have one until you go your separate ways.

8. Break Up In A Secluded Place

There is no doubt that the breakup moment would be emotional and your partner would want to express some sort of emotion. You will be doing both of you a whole lot of good if you pick a secluded area to break the news.

Of course, you shouldn’t pick a place with a romantic setting but just somewhere you’ll be sure there’s no multitude of people to experience the bitter moment.

9. Stay Away From The Home Zone

Be kind enough to do the breakup in his home if you don’t want to do so on a neutral ground. Instead, pick his home for the severance so that you’ll be the one to make an exit, not him. If he is driving, you don’t want him to end up in an accident while returning home with the news that you can’t go on with the wedding plans.

10. Don’t Offer Breadcrumbs To Him

It will be a cruel thing if you tell him things could still work out between you two when you don’t mean that. Don’t add salt to the injury, let him move on with his life without feeling like both of you could still be a thing. If you offer him breadcrumbs, you will be crushing him gradually.

So it didn’t work out for you both as partners and you are thinking you will compensate him with friendship? It doesn’t always work out because the history between you both will always interfere. You had a good time with him but it is best if you let go completely. So choose your words carefully when breaking off the engagement.

12. Don’t Break Up To Become Enemies

That you’re going your separate ways also doesn’t mean your ex will become your enemy. I’m sure you didn’t almost want to marry a despicable man and so he must be someone with amazing attributes. Even while trying to break up with him, appreciate his good qualities without patronizing him or still acting seemingly interested. Create a balance that works.

To avoid mixing things up in the future, stay away from him physically and emotionally. Don’t try to be his support system after separating from him. You canceled the wedding planning, broke his heart, I’m not so sure he really wants you gallivanting about in his business. It will send him mixed signals and he could mess up with you because of it.

Don’t ask or deceive him to have sex with you before breaking off the engagement with him. That would be confusing and insensitive to your partner. It portrays you as selfish too, you don’t want him hating you, so just break up without extra shenanigans.

15. Don’t Leave A Trace Of Yourself With Him

This can be the hardest because he would want to still hold on to you for a long time, but ensure you pack up all your stuff from his place. This will save both of you more heartache and there won’t be a reason to remember the hurt of not being together anymore.

Is it OK to call off an engagement?

Breaking up with your fiancé before the D-day may seem cruel, but it’s not wrong. It’s better to end the relationship now, instead of getting married and divorcing after three months. So, if there are enough reasons to do so, then it is very okay to call off a wedding.

What percentage of engagements are called off?

Apparently, about 20 percent of engagements are called off before the wedding. This is quite painful but it is the reality. Many people change their minds even after deciding to go through months of planning a ceremony.

How do you know when to call off an engagement?

You know you need to break things off when all you feel is dread towards your upcoming nuptials. The feeling would go beyond wedding jitters and nervousness about how the day would go.

What to do when you break off an engagement?

Give yourself time to heal and get over the mess. Send out apology messages to everyone you had invited for the wedding and request for the help of your friends and family with taking care of the necessary details since the wedding won’t hold again.

How many engaged couples break up?

You would be surprised at the number of breakups that happen before they can see the wedding ceremony through. Up to 20% of engaged couples do not see the arrangement through to marriage due to many reasons ranging from indecision to a change of mind or infidelity.

Breaking up is not fun but you can do it without feeling like you’re literally killing the other person. By following the tips provided in this article, you can make a clean break that will allow you and your ex act amicably towards each other if you meet in the future. Share this article if it helped you and don’t forget to leave a comment below.