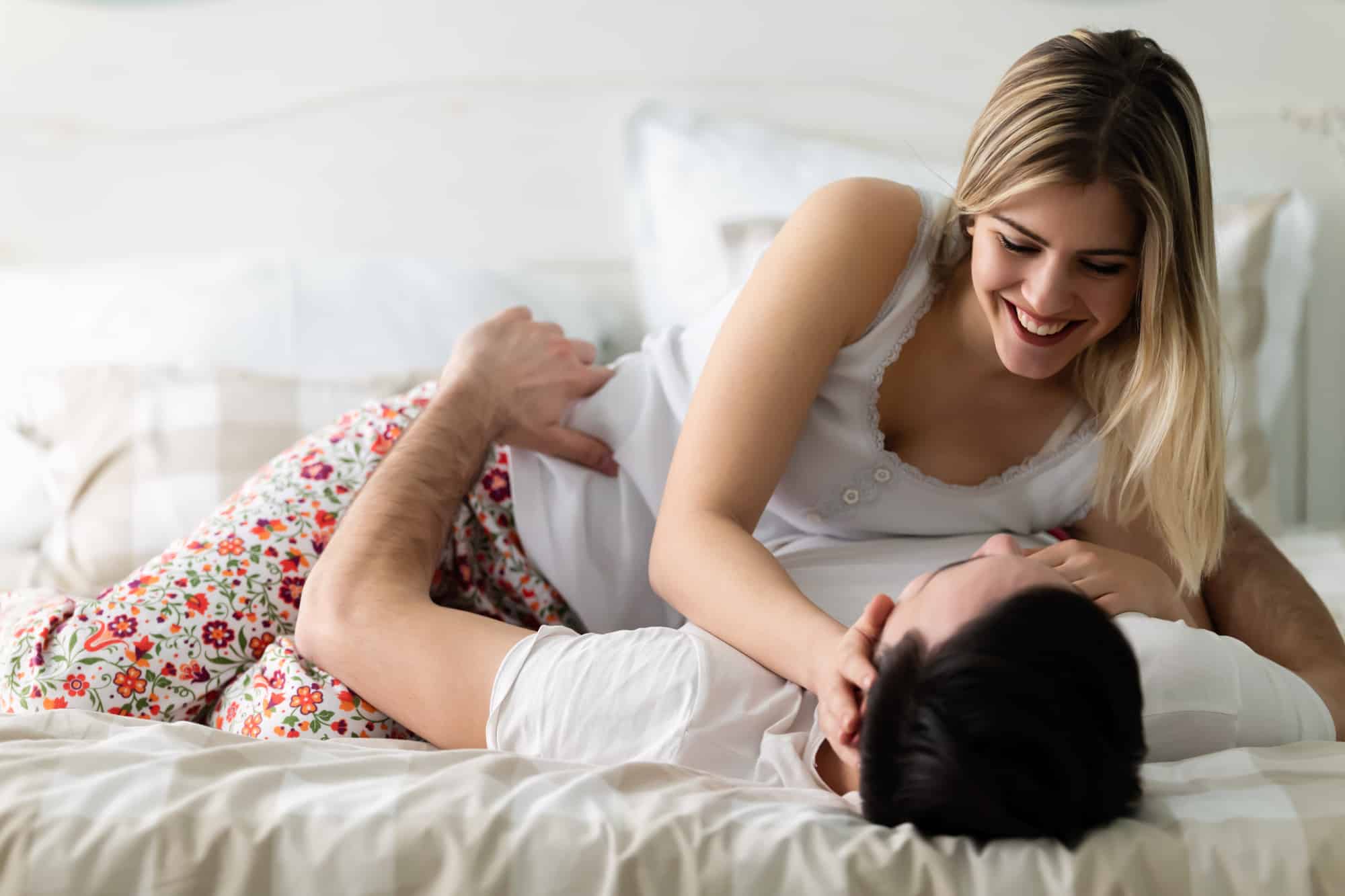 This topic often sounds absurd to traditional women. For them, it’s a little difficult to understand the need to feminize men when you are attracted to all the masculinity in a guy.

These days, the question is, “Why would you want him to be feminine when you can just be with a woman?” I think the whole concept is misunderstood. When there’s such a thing as toxic masculinity, feminizing your partner becomes more critical. When a wife feminizes husband, she’s just creating a more female-led relationship.

If you think about it, men having to act in a masculine way is just a social construct made by men themselves to promote and justify gender inequality. Feminizing husband has different reasons, and many men would probably frown at the idea.

However, female-led relationships can improve the quality of understanding and breed harmony. In this article, I’ve got eleven advantages of feminizing your husband to share, grab a seat!

11 Advantages Of A Female Led Relationship

Introducing a guy to female hygiene would drastically change his own for the better. Not all men know how to take care of their bodies as females do; others are just average. Teaching your partner proper shaving of body hair would introduce him to the smooth comfort and sweet smell it brings.

Also, one of the hygienic aspects of feminization is the way a man stands to pee. Making him sit on the toilet to pee like a woman would help him understand how disgusting those droplets of urine on the side of the toilet are. Next time he would either aim well or wipe off the seat after.

2. It will make him respect your authority

This goes beyond playing dress-up with your husband; it messes with his psyche. Dressing him up to expose part of his body to please you while you don't have to wear anything revealing to get his attention would make him more submissive.

Let him wear the high heels for a change. If the roles were reversed, it would not feel so good to be treated like all there is to you is your body. Putting a guy in this position would make him respect the authority of a woman.

Extremists turn their husbands into their maids. They are making him do all the household chores to gain some time to pick up a hobby, lounge around, or hang out with friends. However, just introducing him to a few chores would show him the importance of helping you out.

It's not just the wife's duty to do tasks; the husband can as well. As long as you both live in that house, it's your responsibility to each other. Introducing the cleaning habit into a man would make him tidy the house on his own and ensure it stays the same.

4. He will understand women

You’re probably wondering, “will feminizing my husband really change anything?” The answer is simple - yes it will. When you feminize your husband to take on what would normally be a woman’s chore, it would help him relate better to a woman's situation because he has experienced something like it as well.

Having faced the reality of a woman, he will treat you with more respect and appreciate your efforts. Switching roles would allow him to act like a housewife (literally walk in your shoes) enough to understand how to help or support you.

Feminizing your partner would also keep him connected to other females and help him treat them as he would treat himself. It takes a while, but eventually, the result is magnificent; he will be more sensitive to you.

Men are often stereotyped as aggressive and easily angered species. At the same time, women are stereotyped as tender and peaceful (except when provoked).

A feminized man will understand how to express his opinion or feelings to a woman without getting angry, or belittling his subject. Let’s be real, men are usually quicker to get in fights than women, which is a result of high testosterone levels. With feminization, it would also tame him down and make him more calm and calculative in the actions he takes.

6. It cuts off bad habits

How to feminize a man is by introducing him to the perspective and way of life of females. He would learn etiquette just like women do, how to sit, walk, talk, and the aura to give off in public. This would carve him into a true gentleman when it's done and improve your relationship.

More so, with feminization, bad habits like biting nails in public, peeing on the toilet seat, speaking over someone, and the likes would diminish with time. He will start paying attention to his surroundings and act accordingly—no speaking out of turn or generally acting violently for no reason at all.

7. It is suitable for him

Believe it or not, feminization will take the weight off your man’s shoulders. He no longer has to be an ultimate provider or play the ‘know-it-all’ role. That will ultimately be your responsibility while he relaxes. In fact, your sex life might also improve too. This is highly likely because once two people understand themselves better in the relationship, improvement in other areas follows.

8. It will make him more attractive

There is no doubt that feminization enhances good looks. All additional grooming he has picked up will provide the ultimate glow. He would look better than ever, continually glowing. you might soon find yourself coming home to your very own Ken.

9. His sexual energy will increase

Understandably, it's a major turn-on for a wife to have her husband dress up as a woman. However, it's another type of kinky role play between couples that keeps sex very exciting. More so, it's a powerful tool in a wife's hand for manipulating her husband during sex.

A lot of men out there enjoy being submissive to their sexual partners as much as they like to dominate as well; they just haven't tried it yet. No matter how dead your sexual life has become, this type of role-playing will wake it up once you get past the laughing point to be in character.

As we have already established, feminization allows a guy to appreciate his woman more. With this, he would like to always be there for her to show how much he cares. More so, sleeping with another woman will likely not be on the table. Feminization builds in the idea of faithfulness in guys because that's part of the ideal characteristics of a woman.

Like I mentioned earlier, feminizing your partner would change his entire demeanor. Interestingly clothes have a way of affecting what we do physiologically. So, try to have him in your robes. You'll likely see a big change.

A good example is a soldier when he's wearing his uniform and when he's not - he acts differently at both times. That's the same effect dressing in feminine clothes would have on your husband. He would come off much calmer and relaxed.

What should a good husband do for his wife?

A good husband should, first and foremost, love his wife. If he does love her, the rest of his responsibilities will come easily. A good husband should also protect his wife and be a best friend. He should further understand her, respect her beliefs, and show his wife some love. Additionally, a good husband is very supportive of his wife, accepts her faults, and takes care of her.

What does a woman want from a husband?

A woman wants love and affection from her husband; someone who would miss her when she's gone on a holiday or to work. She wants a partner who would support her dreams and encourage her to achieve them. On top of this, a woman wants a husband who is a friend, one who would be her shoulder to cry on. The ideal husband would be the guy who understands and treats her lovingly.

What a man needs from a woman in marriage?

While great sex is at the top of this list, there are other things a husband needs from his spouse. He needs affection from his wife to remind him how much she cares. He also needs belief in his ability to provide for his family. He needs a woman who would understand him and be appreciative of his efforts. Just as important, respect is one of the most important things men need from their wives.

What should be the husband's role in marriage?

The husband's role in a marriage is to be a leader. As the head of the household, he should take the lead. Make the hard decisions for the benefit of the family and put himself first to protect and provide for them. Another role is to love his wife and serve her unconditionally by providing for her and meeting all her needs.

What does a man want from his wife?

Having read through the advantages of feminizing your partner or any man, I hope that you would try to do so as much as you can. I would really love to read your thoughts in the comments section below. Please share this article with your friends as well. Thank you.