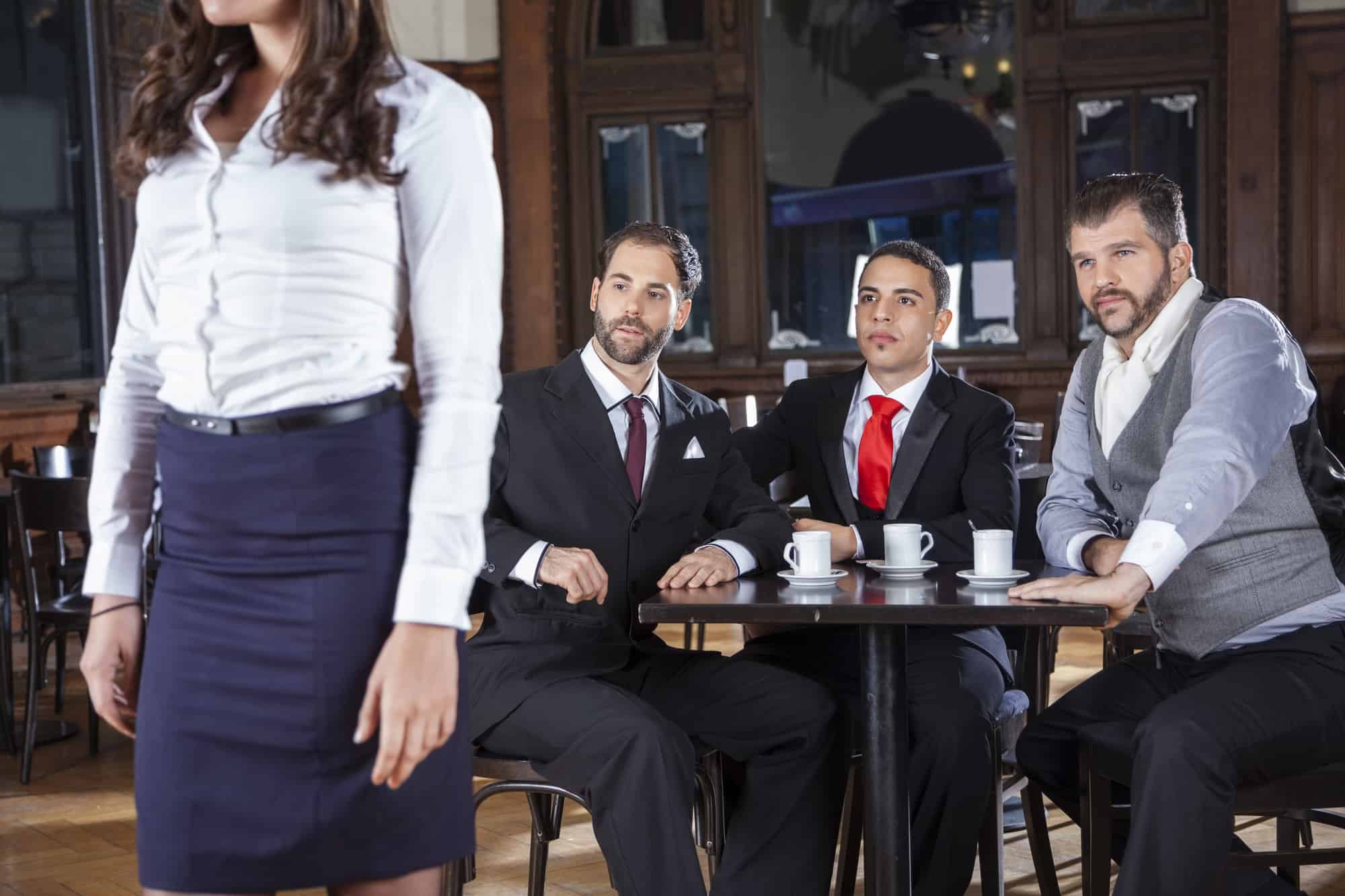 Some people see catcalling as something sexy, confident, or ‘gangster.’

While one woman wouldn’t mind the gesture, another may be totally appalled. It'll further blow your mind that some of the people that do this thing it’s complimentary to women and so they get upset or angry when she doesn't respond nicely.

To be honest, a few women have caught the web as well. As they've gotten so used to it, they often feel unattractive when nobody cat-calls them on the street. In the end, for women, it all comes down to knowing your worth and raising your standards accordingly.

Part of me has always wanted a sneak peek into the mind of men who catcall. This has been going on for years and through generations. It's almost starting to look ‘okay’ to harass women on the street just to get their attention.

Catcalling gets vulgar and violent sometimes; it's not just about annoying whistle sounds or perverted looks, it's also about men curtailing women to mere objects of desire. If you're like me, curious about what type of man does this, what makes him do it, or what he seeks to achieve, keep reading, I found enough reasons to share.

Only a man with low self-confidence would catcall a woman. He doesn't think he has what it takes to walk up to her and strike a conversation so he would rather make gestures at her or whistle. Hardly any lady I know ever responds positively to this. Some even feel violated and disrespected. It's scary to be called like that by a stranger; your first concern would probably be ‘safety.’

Any man who cat-calls a lady isn’t well trained; that’s not gentlemanly at all. If you want to get a girl's attention, the right thing to do is walk up to her (don’t touch her), ask for permission to speak with her, and if she declines, move on nicely.

That’s how sexual assault starts actually, doing something someone else isn’t comfortable with. Objectifying women isn’t cool, it’s ratchet. And more people need to know this. You don’t find the men in a civilized neighborhood hooting or making funny sounds when a woman walks by, they are probably too busy being classy and focused.

I know, you're probably thinking, “why would frustration make anyone catcall a lady?”  I can explain. Take a look at the lives of those men who catcall women on the streets,  they look like they’ve had it rough in life.

I mean for a man to slow down his car by a lady just to holler at her from the inside screams frustration to me. You have to be desperate to pull such a demeaning stunt to get a woman.

4. They think it's complimentary

Sadly, a lot of men out there consider catcalling a lady as complimentary. In their heads, it means you look beautiful and attractive. Therefore you should respond to them nicely as you would when receiving a compliment. They don't understand why women make a big deal out of a ‘harmless catcall.’

You'd be surprised; some men go as far as getting upset when you don't respond to their call, their body language changes and they start getting offensive. It's smart not to interact with such individuals; you don't know what their issues are.

It's a bizarre way to seek attention from a lady, but that's why some men do it. I got so used to getting catcalled in the town that I trained myself not to respond to it unconsciously. Until one day, some dude kept whistling at me so bad I decided to turn; then, he said, “you dropped your scarf.”

This is one of the rare occasions, but it's advisable to glance at the catcaller for security reasons. Sometimes, he just wants to see your face or call your attention. However, you’ll never know if you don’t look back just to make sure.

Cat-calls are like a power move that guys use to objectify women they are attracted to. It's a very demeaning thing to do and is socially unacceptable. What's funny is that they believe it might work even though it hardly ever does.

Ignore men who are fond of harassing you in this manner. If anything, beware of them. Guys harass women to ‘put them in their place’ or remind them who has the power, they usually do this in groups to a woman passing by just so she feels intimidated.

You'd be shocked to know that they're doing this in hopes that It'll make you feel good. Meanwhile, you're battling so much fear, awkwardness, and disgust in you. Some women have gotten so used to getting catcalled; they feel ugly without it. This is how bad it breaks your self-esteem and reduces your standards to dust.

You don't need a stranger to make you feel good about yourself or the way you look; their opinions don't matter at all. People who indulge in this sometimes, don’t know any better, but that doesn’t make it okay.

Mostly young boys do stuff like that or sometimes, guys who have refused to grow up. Young boys don't see the problem with it all, especially the ones from an uneducated background. They think It makes them look cool, and they use it to build their self-esteem around women.

Young boys who have nothing to do with their lives except getting drunk or high are often the catcallers. It makes it scarier when you realize that the caller could be under the influence of drugs or alcohol.

Only a weirdo would pull off such an act. Yelling at someone you don't know sounds very weird to me. This is one of the reasons I ask, “why do men catcall?” because it's odd. People are supposed to have self-control, so even though a fine lady walked past a group of guys, they should be able to behave themselves.

One other reason people whistle, make gestures and make degrading sounds at ladies is because they think it’s fun. The thrill they get from doing something wrong and the different reactions from the various women that walk by must be hilarious for them.

11. They're out of your league

Some guys know that they would never come in close contact with you even if they wanted to. You're a woman who looks very beautiful to them, and they have nothing tangible to offer you.

As disrespectful as catcalling might seem, it's the only thing they can do to get your attention for at least a few seconds. This can make a guy feel oddly satisfied with himself when you turn to look at him because of it. Weird, I know.

Some guys just don't care what anyone thinks when it comes to how they approach women. They've completely sold out their shame that they have none left. It doesn't bother such guys what you think about being whistled at, whatever response you give, they would be indifferent to it.

This type of man is only calling you in such a manner because he can, he doesn't care about the effects it has on you or whatever it says about him.

Some guys only do it because it's a ‘thing.’ They've seen others do it, so they join in as well to look cool. I don't think a man who hangs around friends who are aware that making such sounds and gestures are offensive to ladies would indulge in it.

The stereotype around this act has to change for the men involved to realize how offensive catcalls are. For some, other than the fact that men around them are doing it, they have no other reason to, and it has nothing to do with you.

What does being catcalled mean?

A catcall is a sexually suggestive call made by a man or group of men to a lady or group of ladies on the street. It could be a whistle, hollering, and even a grab.

Yes, being catcalled is a type of harassment. Although not everyone is aware that some strong women all over the globe are actively creating awareness about it because of how humiliating it is.

How do you deal with catcalling?

I always advise that you don't indulge them because it's safer not to. Responding to those types of calls only prolongs the street harassment. However, if you think you can handle the situation, go ahead. Sometimes, it’s better to look behind you to access the situation and ensure they aren’t merely calling your attention to something important.

What are the effects of catcalling?

A cat-call is a form of street harassment, and it’s an insult to the empowerment movement, ladies who are being objectified feel belittled, powerless, and humiliated.

What is it called when you whistle at a girl?

When you wolf-whistle at a girl, you are catcalling her. Just in case you're not aware, that's a form of harassment, and you are objectifying that girl. Whatever happened to the old-fashioned way of approaching a lady you admire to talk to her nicely? Lie and let live!

I hope you enjoyed reading this article as much as I did writing it. Always keep in mind that catcalling isn't cool, it's a form of sexual harassment. I would love to hear your thoughts on this subject; please share them with me in the comments section and share this article with your friends as well.