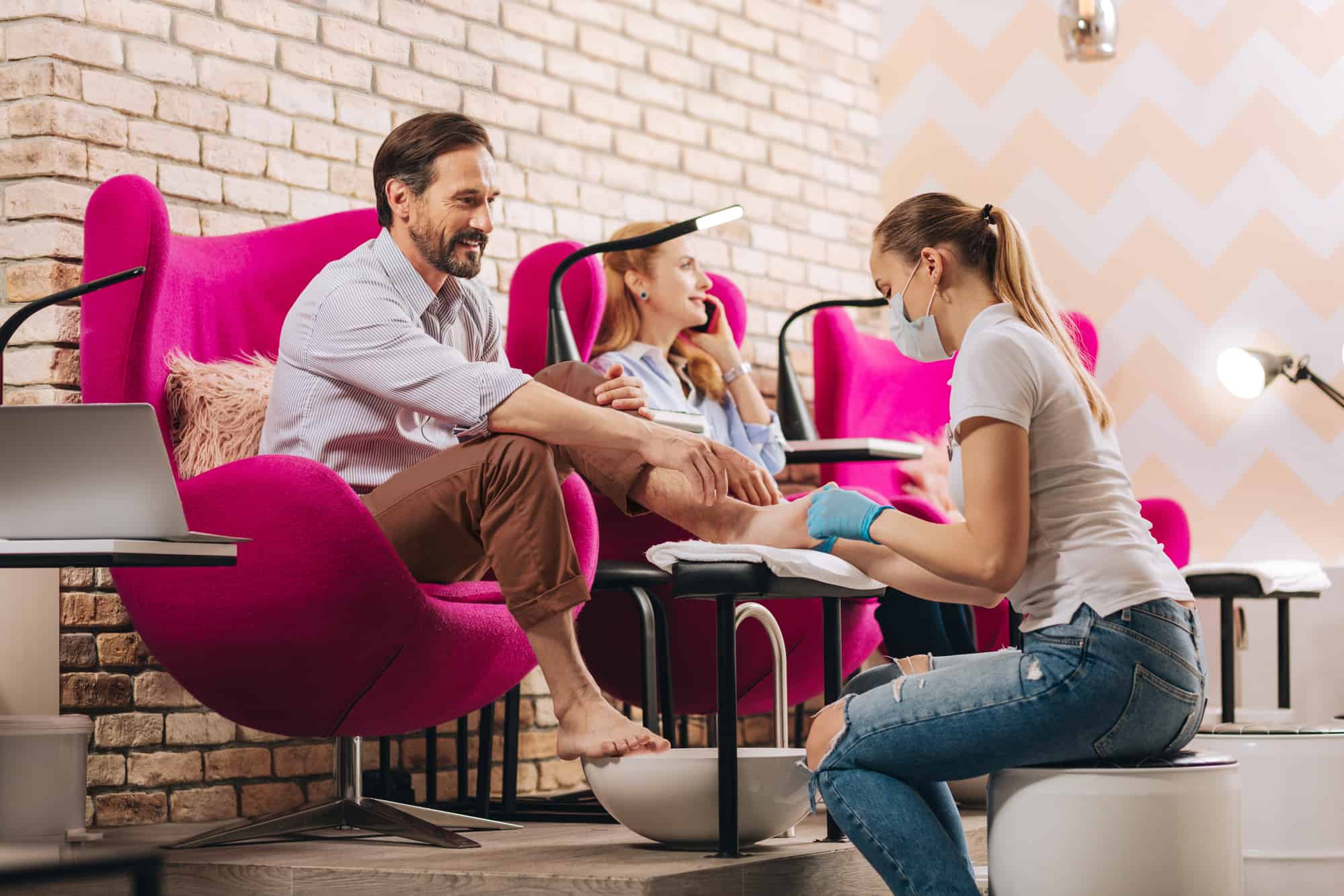 Why Do Guys Paint Their Toenails (7 Unusual Reasons)

There’s been quite a lot of cultural fuss over the growing trend of guys wearing men’s nail polish. For many, the fear is that this men’s nail polish trend would tear down age-long gender norms and stir up more open discussions.

As of now, painted nails are no more an exclusive right of women. While some may find this awkward, some guys frequent the nail salon to polish their toenails. What’s more, guys sporting nail polish is fast becoming a mainstream phenomenon in modern-day society. Fashion brands are now churning out men’s nail polish to cater to the male folk.

You’re here because you can’t seem to wrap your head around this trend of men with nail polish. There are several reasons why millennials are going ahead with this trend ranging from the expected to the unexpected. Interestingly, I have been able to highlight a few of these reasons.

1. For fun and laughs

More often than none, chaps sport colored nails just for the thrill of doing so. Everybody is entitled to do what makes them happy, even if it means painting their nails. Funny enough, men who have young daughters are susceptible to having their nails used for practice.

Please make no mistake; it grows the bond between father and daughter. Furthermore, guys occasionally find themselves as product testers for their female partners. And no doubt, men who polish their nails appeal to some ladies in a sexual manner.

2. To enhance their outward appearance

Colored nail polish makes the hands and toes look prettier for those who pay attention to things like that. It does not only accentuate skin color but enhances one’s physical outlook. It’s becoming increasingly popular to find fashion-conscious guys painting their nails.

Guys wear them to match the clothes they are wearing. The goth and punk subculture accounts for the large number of guys with colored nails. The reason is simple- bright colors command some attention and brightens up costumes.

3. To aid a social impact campaign

Social campaigns for specific causes are usually the reason why most guys wear colored men’s nail polish. They see it as a way of lending their voice to a humanitarian or global cause.

There have been a lot of campaigns recently ranging from rape to gender violence. Male celebrities are the trailblazers in this regard as they spearhead such campaigns. Organizers of such campaigns envision that it inspires their fans to become more proactive and join the movement.

For your information, there’s a growing trend called nail art. It’s a type of artwork that deals with decorating and embellishing nails. Despite being associated with femininity in some climes, some guys utilize it to showcase their creativity and artistic tendencies.

In time past, black nail polish was even something acceptable, but guys now try their hands on various nail art designs and colors. If you see a guy with a bold color like blue, purple, or even pink, he may probably be a nail-art enthusiast.

Coloring the toenails is a way of expressing one’s feelings and emotions without saying a word. This classic craze is mainly associated with the gay, transgender, and queer community. The new trend borders on the idea of self-expression and gender identity.

Also, there’s the idea of inclusivity for those who might consider themselves marginalized. We’re likely to witness an increasing inclusion of guys in the manicure and pedicure salons. People are coming to terms with the fact that colored nails do not speak to a person’s gender or sexuality.

Just as with everything else in life, people sometimes do all kinds of stuff for personal reasons. I have seen guys who wear colored polish to stop them from biting on their nails. Some wear it because it keeps their nails healthy and prevents them from cracking.

Male folk wearing polish isn’t such an alarming prospect if it means them taking better care of their nails. Additionally, some millennials wear it to pass a message that they can be fun and classy.

Wearing colored manicure has the same effect on guys and ladies alike in the sense that it makes them feel poised and confident. Widely acclaimed songwriter and screenwriter, Varun Grover, is well known for his colored manicure, which he claims makes him look beautiful and colorful.

Millennials see it as taking pride in who they are or what they do. Colored polish could also represent a person’s personality and help them project some self-confidence.

What does it mean when guys paint their nails?

It’s prevalent to dismiss chaps with polished nails as gay, but that’s not always the case. For some, they are merely trying to make a bold fashion statement or get funky. Sometimes, men apply color to their nails to show solidarity with humanitarian or political causes, as seen in many cases worldwide.

Why do guys paint their toenails black?

Black nail polish is mainly used in the goth culture by rock and rollers. Additionally, there could be an underlying political or gender-based motive for doing so. There’s also the fun part where kids or partners polish their nails black. Odds are, there may not be any rational reason attached to it other than to have fun.

Why do guys paint one toenail?

Chances are, it has something to do with a social campaign for a charitable cause. In 2015, the polished man campaign sought to publicize and gather much-needed funds to tackle children’s violence. Chaps who participated in the social impact campaign were mandated to have a single nail painted to support the movement.

Is it OK for guys to paint their nails?

This culture started as far back as 3,000 B.C but gradually faded off. Thanks to the ever-evolving world of fashion, men painting their nails is no longer a gender thing. It’s normal to find men with their nails adorned with a variety of colors in public places. Male celebrities, especially rock stars do this a lot.

The usual cliché that only gay men and transgenders wear nail polish is utterly false. These assumptions are offensive, to say the least to straight men who love getting their nails done. In addition to that, painted nails are not indicative of a person’s sexuality. Painting nails doesn’t speak to a man’s masculinity or sexual orientation either.

Thank you for taking the time off to read through this article. I hope you found the content interesting and insightful? If yes, kindly share your thoughts and views by leaving a comment below. Feel free to share this article as it can also be of help to others.

You May Also Like
Dating While Living With Parents (5 Surprising Things To Expect)
No Comments
Why Do Guys Paint Their Toenails (7 Unusual Reasons)
6 Comments
Does My Crush Like Me? (17 Undeniable Signs)
No Comments