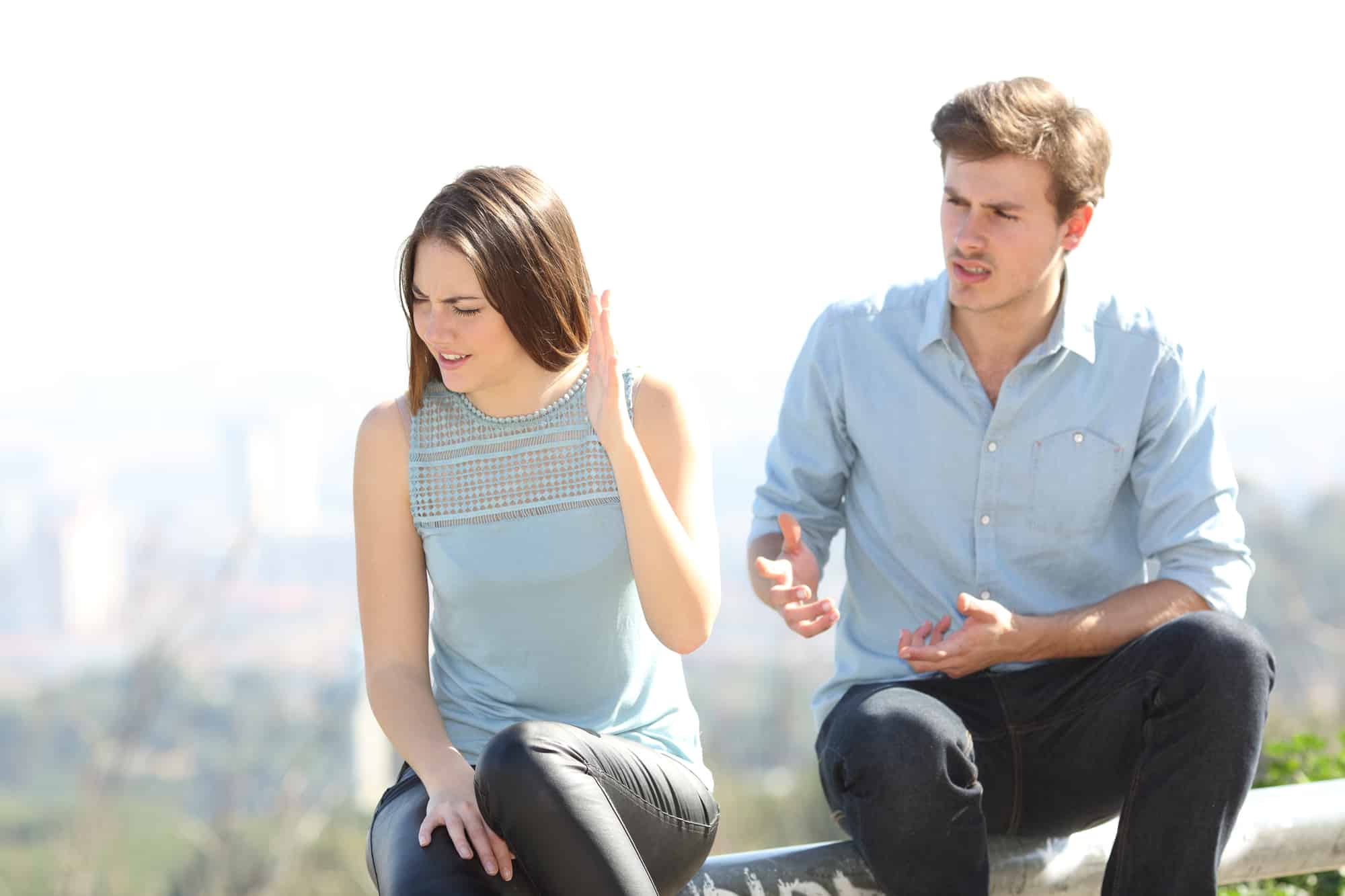 Why Did He Break Up With Me If He Still Loves Me? (6 Unbelievable Reasons)

Your boyfriend broke up with you but claims his feelings for you haven’t changed. Seriously, how do you explain that?

Breakups are hurtful and devastating moments accompanied by a degree of loneliness at some point. In fact, just knowing that you might never be with the guy you love again is enough to get you frustrated and full of ideas on how to get your ex back.

The first thing that may go through your mind when the guy you thought was ‘the One’ break-ups with you is that there is someone else. One thing is certain if he’s breaking up with you, there’s a reason, whether it’s that he fell out of love, found someone else, or found out you’re both medically incompatible!

When he springs a breakup speech out of the blue, you’re expecting a solid and sincere reason, not a “babe, I still love you, but it’s best that we go our separate ways” speech.

The question that must be running through your mind now is “why did he break up with me if he still loves me?” His post-breakup behavior is what you can’t just understand. Not minding that you guys broke things off, he regularly calls and sends you emotional messages.

That said; there is more than one reason why a guy would end things with you while insisting he still has feelings for you, so let’s delve right into it.

1. There was so much pressure in the relationship

Basic human instincts push us to avoid pain and always find pleasure. That’s why most men tend to leave a relationship if there is so much fighting, quarrels, misunderstandings, and arguments. In your case, maybe he couldn’t just deal with all that at that moment and decided to take a break.

This doesn’t rule out the fact that he cares for you, but the decision to leave is probably intended to maintain his sanity. I know that break-ups tend to happen all the time and it’s never one person’s fault, but I hate to break it to you but this time around, you may have contributed significantly to it.

Nobody wants to be in an unhealthy relationship no matter how much they love the other person. If you want to get your ex back, try setting up a meeting between the two of you. Talk to him about why he left and he might just open up to you after all.

2. He sees no future with you

I know this is a very hurtful assertion to make and probably not what you were expecting to hear. Men have a way of drawing conclusions from the behavior of their partners. The things you consider ‘little’ might be a big deal to him.

For example, you don’t want children when you get married but unknowingly to you, your ex has strong family ties and fancies the idea of children. It’s also possible your ex notices how you regularly get negative and emotional in the face of heated arguments and disputes. No matter how he tries to explain himself or comfort you, you simply wouldn’t have it.

At this point, your ex is going to assume that things wouldn’t get any better in the future.

Issues of compatibility may have also played out in a way. Men are fond of testing to see if a relationship is futuristic and when it’s not they back out.

Nobody wants to invest his emotions, time, and resources into a relationship that might not just work at the end. So, even though you want to get back together, it might not be feasible if this is the reason.

3. He no longer finds you attractive

This is not a question of whether his feelings for you are genuine or not, it’s a very rational reason behind why a man would leave a woman even though his feelings for her are intact. The relationship may be promising but once the attraction is lost he may feel like there’s no point.

Personally, I think that a man who is genuinely in love with you would find all possible means to rekindle the lost attraction. They will try to work out the issues behind the loss of attraction. However, not all men are courageous and strong enough to weather this sort of storm.

So this may be one of the reasons why he feels the best choice is to leave the relationship. Another reason why your ex might have left you is that he no longer feels some sort of deep connection with you. When the emotional connection is lost, the relationship becomes more like work to him.

No doubt, having an intimate connection is very important and you should seek ways of re-establishing it if you want to get your ex back.

4. You depend so much on him

When a man sees that a lady depends too much on him to the extent that she loses her sense of purpose, it turns him off entirely. I know that men love their women to lean on them for support and protection but when it becomes too much and overbearing, the reverse becomes the case.

Your relationship shouldn’t get to the point of becoming your life’s purpose. You may come off as desperate especially when you go as far as neglecting your friends and things that define your essence just to please him. Your constant need and dependence on him might have invariably chased your ex away.

The die is cast anyway, so I suggest you take some time off relationships and try to find yourself again, instead of trying to get your ex back immediately. Reconnect with your close friends and go back to doing those things you loved doing. After a while, it’s possible you might get back together with your ex.

5. He can’t recognize himself anymore

In as much as you want to see your partner turn out well, you shouldn’t attempt changing or ‘fixing’ them. His personality traits like how he chews his food, his posture, the way he

talks or dresses up shouldn’t be tampered with, you might end up losing him completely.

Maybe he wasn’t a social media person, but now, he’s taking numerous photos and sharing personal parts of his life he would prefer keeping personal, and that might be upsetting.

Where most of us women get it wrong is that we try to make the man see things from our perspective and not theirs.

Your ex may still have feelings for you but the truth is at some point, he’ll realize that he has only one life to live, and he’s better off living his to the fullest.

6. You had nothing in common anymore

You and your boyfriend may have been attracted to each other through shared interests. Maybe you both loved talking about politics, or the latest technological trend. After a while of being together, all that changed and you both didn’t seem to get along any more.

You barely agree on anything and when you do, it’s almost difficult to see it through. These mundane and insignificant differences may likely be one of the reasons he broke up with you. I recommend you do a heart check and reflect back to when you first met. You would discover those things that attracted him to you in the first place.

I believe that your relationship is still salvageable if you are intent on saving it and getting back together with your ex.

Why would he break up with me if he loves me?

Most men abandon ship when things get awry and messy in a relationship. Your ex may no longer be able to cope with the incessant arguments and misunderstandings. Love doesn’t negate his desire for happiness and fulfillment. Maybe he has lost his attraction for you and the intimacy feels more forced than natural.

How do you know if he still loves you after a break up?

If your ex-boyfriend regularly contacts you even with the no-contact rule in place, then he probably still has feelings for you. Another way to know is when he hooks up with other ladies to make you get jealous. He might also make some emotional confessions to you unknowingly amongst friends during a drunken moment.

How long does it take for a guy to regret breaking up?

This depends entirely on how thick-skinned a man is, for some, the feeling of regret starts to get at them almost immediately, but for ‘thick-skinned’ men, it takes a longer time. In fact, some guys might even feel relief at the initial time but in the long run, start to feel some remorse, this is the only reason why they would want to get their ex back.

Why did he break up with me so suddenly?

Your ex may have backed out because he feels pressured and cornered in the relationship. Also, something may have been weighing heavy on his mind, and in order not to tell you or let it affect you, he walks away. Oftentimes, guys walk away when the relationship starts getting intense especially when they didn’t plan for such challenges.

Can someone leave you if they love you?

Yes, they can, for reasons best known to them, however, leaving someone you love so deeply and intensely is never easy. So when it happens, something must have instigated it, maybe the person is very unhappy in the relationship and needs some personal time off. Loss of attraction or emotional connection is another likely cause.

Love is not absolute when it comes to establishing a lasting relationship, just as you’ve seen from this post, there are other factors that make relationships fall through.

You’re free to express your thoughts in the comment section below, please don’t keep this article to yourself, share it with others.

2 comments on “Why Did He Break Up With Me If He Still Loves Me? (6 Unbelievable Reasons)”

You May Also Like
Dating Your Friend’s Ex (7 Crucial Things)
No Comments
My Boyfriends Past Bothers Me (15 Things To Do)
1 Comment
Is Having Breakup Sex A Good Idea? (7 Harmful Reasons)
No Comments