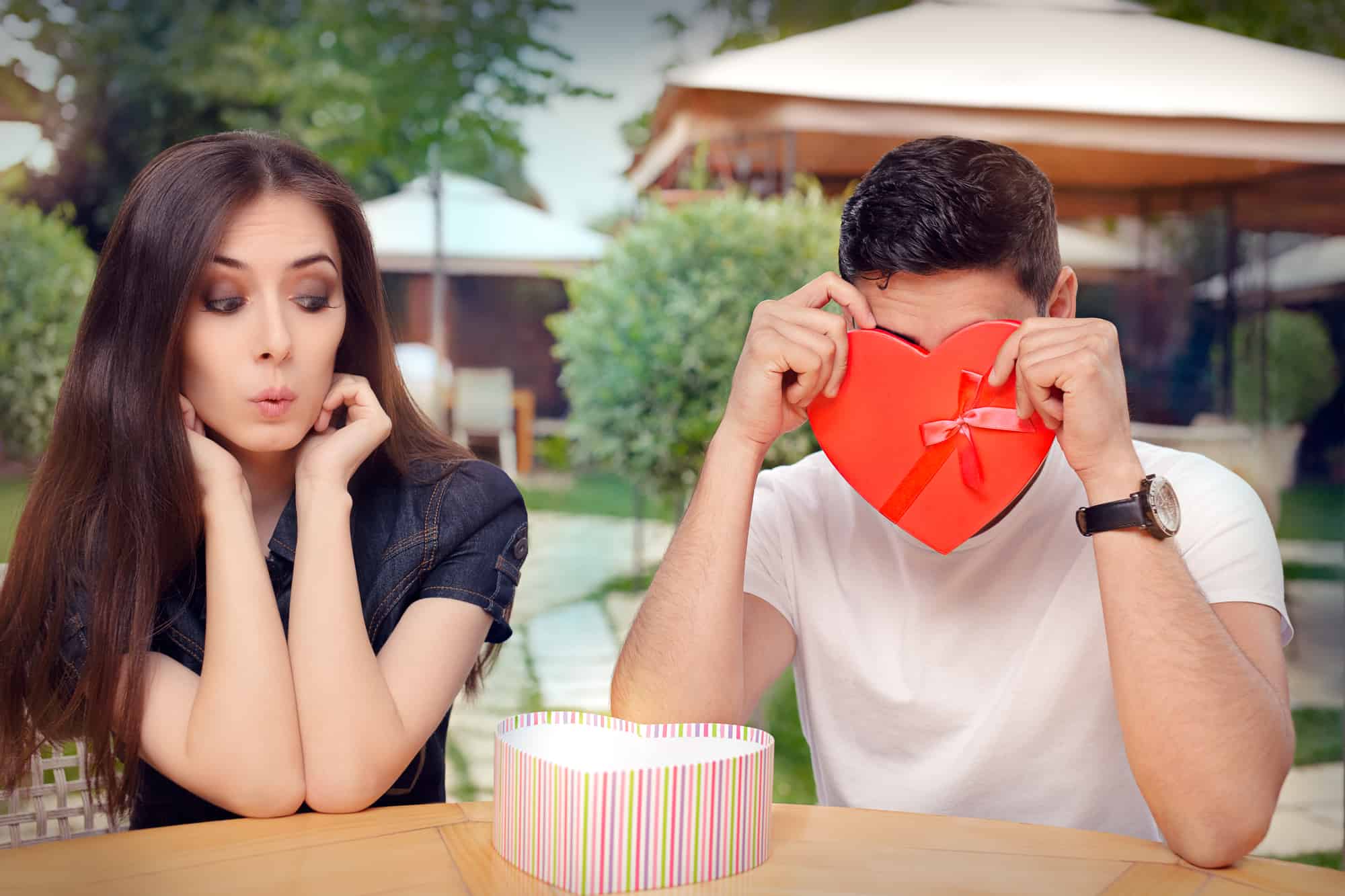 Men are confusing, especially when it comes to their emotions. They don’t wear their feelings on their sleeves, at least not the way women do.

More so, men tend to have their emotions under their control. So, even when they get nervous or uncomfortable, it’s hard to tell. That’s probably why you clicked on this article; when a man is nervous around a woman, how can you tell?

15 Tell-Tale Signs When a Guy is Nervous Around You

1. He laughs at everything

Now, your friends may have complimented your sense of humor in the past, but a man who laughs at all the things you say may be fighting his nerves.

When men get nervous, they look for things to neutralize the odd feelings surging through their bodies. You’ll agree with me that laughing often helps when you get nervous. Yes, it might be an awkward laugh but it helps to let off some steam.

When a man is nervous around a woman, it could be a sign he really likes you. Men get nervous around women they have feelings for, some of them just know how to hide it. One of the ways to tell that he feels a bit uneasy is by how much he compliments you.

When a guy likes a girl, he’ll want to do anything to make her smile or get her to be more comfortable with him.

Furthermore, one study shows that compliments feel just as good as receiving money. So when a man compliments a woman a lot, he just wants her to feel good and enjoy his presence.

3. He is uncomfortable with silence

While it can be annoying when you have a chatty guy around you who does not understand the word silence, it is also a clear sign that he’s uneasy or anxious.

A guy who isn’t comfortable around you will be unusually chatty. He may even say odd things just because he’s trying to get you to focus on him.

This article won’t just focus on how men get nervous when they either love or have a crush on a girl. That’s because men can be fidgety when they are guilty or afraid that you will find out something. The constant rocking, tapping of the feet, or the rambling could mean they are trying to suppress their feelings.

5. He welcomes any form of touch

Have you ever been around some random person, and at a point, your bodies touch? If it is someone you have no interest in, you will quickly withdraw. However, if it’s someone you love, you will welcome their touch.

The same thing goes for a man who’s anxious around you. He will welcome any form of physical touch from you. That’s because your touch calms him down and makes him feel like his presence is welcome.

6. He talks about himself

When a man is around a girl he likes, he may talk more than usual. Yes, it’s a bit strange, but think about it; most times, people fall in love with the idea of someone before falling in love with the person. So maybe that’s the reason why some guys keep going on about themselves, hoping something about them will intrigue you.

Male or female, we all have the same primal instincts to fight or flight when in a stressful situation. We sweat because our brains do not know the difference between when you are in danger and when you have to approach a crush.

So, when a man is uneasy or anxious, he is under a lot of stress, and you will notice him sweat even though it’s cold outside. It may not be that obvious, but if you look well, you’ll see him regularly wiping his hands in a handkerchief or trying to hide the ball of sweat forming a map around his armpit area.

8. He tries to make jokes

I would consider a guy’s attempts to make silly jokes as proof that he is nervous around a woman. You will notice that he makes small jokes about the environment and practically anything… including you.

It does not mean he is trying to make fun of you; he is only trying to get comfortable with being around you. In fact, his jokes may be more beneficial to him than they are to you.

9. He talks in a softer tone

If you want to know how men act when they are uneasy, pay attention to their tone. If the man is shy, you will notice a certain softness in his voice and tone. Some guys even mumble more than they talk, which may be difficult to understand.

Around his friends, he’s probably more eloquent, but with a girl he (secretly) loves, it may be harder to make conversation.

Have you ever caught someone staring at you when you’re not looking?

11. He listens to you attentively

One thing many women do not know is that shy guys are great listeners. When they are not talking, they are happy to hear you speak about yourself or whatever it is that you find interesting.

So if this dude listens to you attentively and does not attempt to interrupt what you're saying or steer the conversation in a different direction, he may be nervous.

He does not want to ruin his chances with you, so he’ll rather let you speak while he listens and makes mental notes. Trust me when I say that he will not forget what you have said anytime soon.

12. He asks you a lot of questions

When guys are nervous, they are not comfortable sitting in silence. That’s because silence gives them the impression that you do not enjoy their presence. So in a bid to fill in the silence, you will notice that he asks you a lot of questions about yourself, your work, and your family.

13. He blushes when you are around him

Even if you are not one to notice nervous guys, blushing is one clear sign that cannot be missed. Blushing is a sign that a man really likes you, even men can’t conceal that subtle blush that gives away their raw feelings.

When we are around people we like, blood rushes to our faces and that’s why we blush. So he may be blushing because he likes you and he is eager to talk to you or get to know you more.

14. He uses a lot of emoticons

You will notice that he uses a lot of emoticons to convey his message. It may seem childish, but he is only nervous and unsure of the right words to use when chatting with you.

15. He avoids being alone with you

For a man who likes you, this may seem counterproductive, but in this case, it’s possible. He may want to spend some time with you alone but isn’t ready to do that because he’s nervous! He doesn’t feel like he has the confidence to carry on a conversation with you without help from a friend.

You will notice he is only okay talking to you when he has a wingman beside him or when among friends. When you two are unavoidably alone, he’ll try to hurry your conversations and leave immediately.

What makes a man nervous around a woman?

When a man is not confident in himself, he might feel nervous around women. He’ll be worrying about impressing her and making sure he does not make a mistake that will put her off. He is trying to be perfect in her eyes, and that is why he is nervous.

What does it mean when a man is nervous around you?

When a man is nervous around you, naturally, your thoughts may go towards the direction that he likes you, and that may be true, but it’s not the only reason. Another reason why you may make a man nervous is that you have an intimidating presence. He does not see you as someone in his league and does not want to embarrass himself, so it makes him fidgety.

What does it mean when a girl makes a guy nervous?

When a woman makes a guy nervous, it means that he is either attracted to her or intimidated by her. He is not comfortable in her presence because he is unsure of her likes and dislikes. Perhaps, if he gets to know her a little bit more, he will feel calmer and relaxed.

Why a man gets nervous?

Nervousness is man’s natural response to feelings of stress, and this stress can come from anything like work, a woman, or trying something new. So, when a man is under pressure, his body prepares for a flight or fight response, thereby stimulating nervousness.

How do you tell if a guy is nervous around you?

You can tell a guy is nervous around you from his body language and tone of voice. He will talk to you in softer tones, and you will notice beads of sweat or his sweaty palms. Another way to know is through his eyes; if he’s not comfortable maintaining eye contact with you, he’ll look away each time you stare.

I hope you enjoyed reading this article and found the tips helpful. Remember, a simple touch on the shoulder, or upper arm can go a long way to relieve a nervous guy. I look forward to reading your comments and don’t forget to share this article with someone it could help.