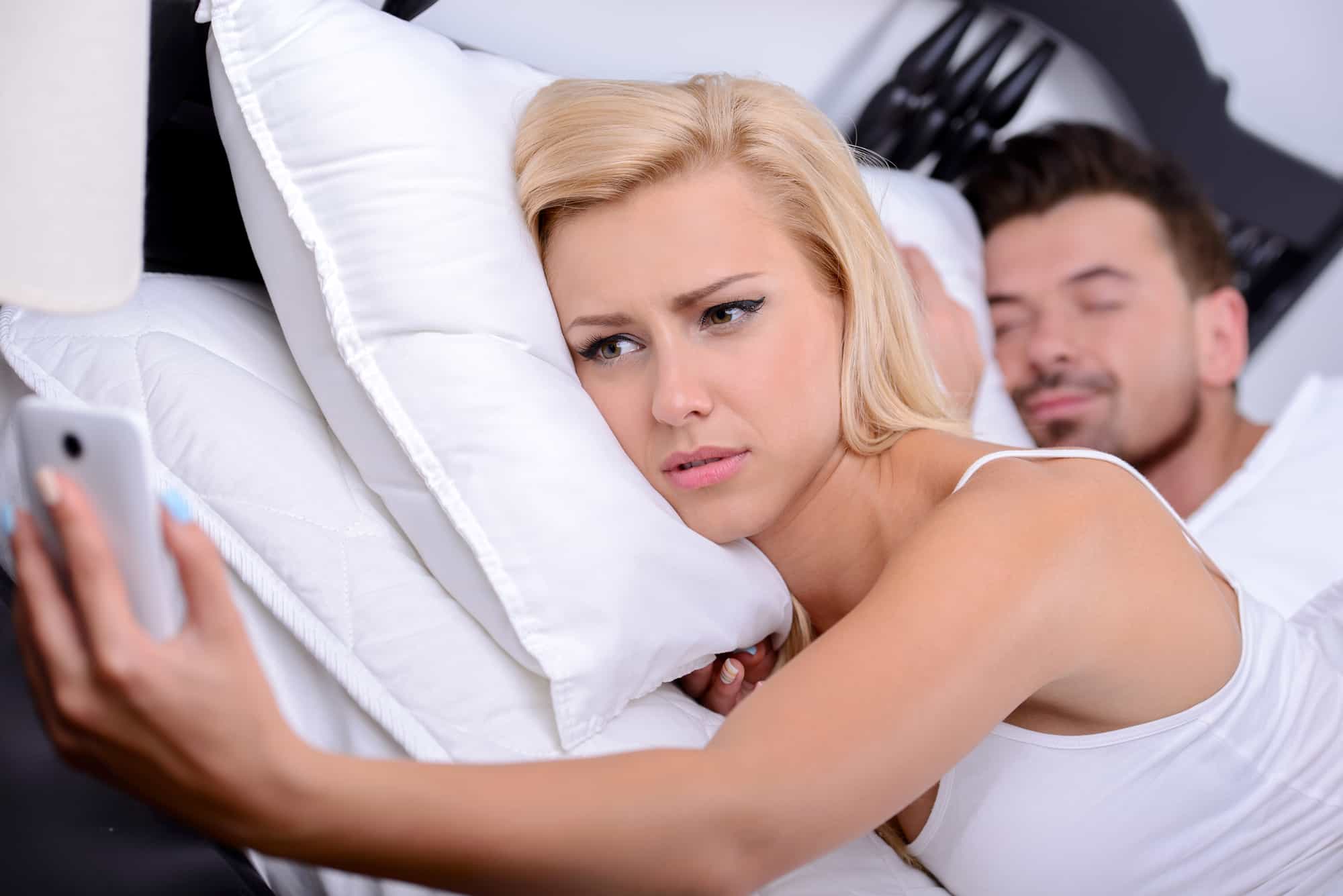 It's been happening for some time and now, and it's slowly starting to get to you. For some days now, your partner has been on his phone a lot, texting a specific, particular female friend. Or a number of them, you're still not sure. Your apprehension has done nothing but soars since you found out, mainly because you're hesitant about asking your spouse about it; you're scared to know the truth.

I can understand how you're feeling, the doubts, fears, and uncertainties. I want to recommend some great ways to get around this issue without ruffling any unnecessary feathers, or making false accusations that can affect your marriage in later years. If you've been wondering ‘is texting cheating?’, and wondering what to do about it, when your partner is texting a different lady, look no further!

Things To Do When Your Husband Is Texting A Female Friend

Before any form of confrontation, the best thing to do is get to know more about whatever is happening. Before you miscommunicate, you will have to ask your mate as calmly and kindly as you can, what exactly is happening. Is she no one but a workmate? Are they old friends? Or is he having an affair? Finding out more will help you take better next steps, which will save your marriage a lot of stress.

2. When he’s texting a friend

You've found out who he's texting with his phone, and it seems to be one of his female contacts. The thing to note is that before your marriage, you were independent individuals with people you cared about and loved (as friends, of course). If he's texting one of such people, there's a high chance he'll be very honest to you, and he might even let you in on the conversations they have.

However, if you sense even though they're friends, your man is messaging too much, you can try asking him to imagine a scenario where the tables were turned. How will he feel if you spoke to your other guys for nights on end, probably even more than you talked to your spouse?

Creating such a scenario might allow your husband to envisage how you're feeling and how much his actions affect you. Note that sounding controlling might not be the best thing in such an instance; thus, be sure to let him know that you appreciate him while getting your point across.

3. When a girl is constantly texting him (or trying to)

It’s not going to be your mate texting with his phone all the time; you might come across texts from a specific female he might not even be willing to reply to. Before doing anything, secretly be happy within that you chose such a hot looking man with great appeal. After this, the best step to take is to draw his attention to what’s happening because most of the time, men are oblivious to women trying to make moves.

More so, your husband may not be aware of how often her texts are coming in, or he doesn't see anything odd with the times they come in. Be sure to point out to him that she’s trying to come onto him and do so in an amusing way such that he doesn’t shut it down immediately.

4. When he’s communicating with someone because of work

When your husband's communication is related to work, there's honestly not a lot that can be done about it as a partner. This is because it's his job, and he needs to be up to the task. Depending on the time when these text messages come in, you may alert him when they go well beyond work hours, disrupting family time. Gently, make him aware that a balance must exist between his job and family life.

Tell him if his work is making you feel like second in his life; you never know; he may not have realized how affected you are by his actions. If you believe something beyond work is taking place between the two parties, you can go to the extreme and visit the office unannounced. You may or may not notice something that shouldn't be upon your visit.

5. When he’s having a sexual or emotional affair

You've done your research and asked him questions about his phone usage, and you are confident that those text messages are indeed from a person he’s romantically involved with or even in a relationship with. How do you deal with such a revelation? That's totally up to you.

When it comes to text cheating, there’s no fixed rule in any book or article telling you the best approach to take. In all cases, how you respond and decide to act will depend mainly on your boundaries and how far is too far for you.

You might decide to get a divorce, or may want to work on the marriage, find out where the issues were and how best you can both move on together. Whatever your decision may be, it should be yours and yours and must be chosen only after you're 100% sure he is having an affair with a new person. There's nothing worse than having regrets after accusing your partner wrongly.

6. Communicate with your partner

Women and men are never the same, no matter how alike we might think we are in many ways. Men can't read things like our minds as women, to find out what is bothering us, and why we're giving them an attitude about a particular issue. Something else to note is that as women, were always so quick to jump to conclusions about our husbands when it comes to unfaithfulness and phone use. This is often because of our previous experiences if we've been cheated on before.

Communication is a way to avoid drawing the wrong conclusions, getting very high blood pressure, or giving attitude to an innocent man who really does love us and only us. Talk to your companion if you feel anything is off or odd. Be sure not to come on as aggressive, and don't blame him before he has the chance to speak. Tell him how you feel about what's happening, and create a comfortable environment where he can be open with you.

7. Don't get mad at your spouse

When someone we love hurts us, it's straightforward to get angry and explode at them even. No matter how tempting that might be with your man, you must avoid such an approach. Blowing up at your significant other out of the blue when you have a suspicion and nothing concrete can be detrimental to your relationship since it might automatically put him on the defense.

Confronting your partner while mad might cause him to lie to you about what's happening, and he might even get mad at you. In the end, the possibility of both parties reaching a consensus, and sorting out your issues will be close to nil, damaging the marriage.

Is it OK for my husband to text another woman?

Your partner texting someone else doesn't always automatically mean that they're engaging in a sexual relationship with them. Many married couples engage in conversations with people without any ulterior motive. It is totally fine for your husband to communicate with other women, but when it becomes a specific person all the time, it might cause the raising of some eyebrows.

What do you do when your husband is texting another woman?

We all wonder what’s the best approach to tackling instances where our husbands text other women. The best way to go is by communicating with him, especially if it's something you're not happy with. Talk to him about it, and you never know; it may not be what you were thinking. Being open and honest in your marriage is essential since it increases trust between both of you for a long time.

Is texting another woman considered cheating?

As individuals, many people have different perceptions of boundaries and how far is too far. For some, occasional chatting with someone isn't a big deal, especially if they have an existing friendship. For others, this can be a serious felony that is equivalent to cheating. A partner texting a girlfriend may or may not be considered cheating, depending on the context and reason for the communication.

How do you know if your husband is interested in another woman?

Virtual communication might be a sign of a mate cheating, but there are many other ways to find out if your spouse is interested in a different person. One of the significant signs is a change in his appearance, which often happens suddenly. Also, your husband's attitude towards you might change dramatically, with him suddenly becoming distant.

Is texting someone cheating?

There is such a thing as social media infidelity, and it is becoming widespread in relationships of the 21st century, with the fast evolution of technology and the cell phone. This form of infidelity can be sexual and might include flirting online and spending less time with your partner. When it gets to this stage, it can be considered cheating.

No fixed rule says, once a man starts texting someone of the opposite sex (female friends), he is cheating on his wife. But one more truth is that cheating doesn't begin with sex; it might begin with regular conversations with that other person. Being able to read the signs your man might display can give you a clue as to what's going on, and the best ways to approach issues.

I hope this article taught you a few things, and you're going to share it with family.

You May Also Like
How To Find Out If My Boyfriend Is On Tinder (7 Clever Ways)
1 Comment
How To Check Your Husband’s Phone (7+ Sneaky Ways)
5 Comments
Is My Boyfriend Cheating? (30 Signs He Is)
1 Comment