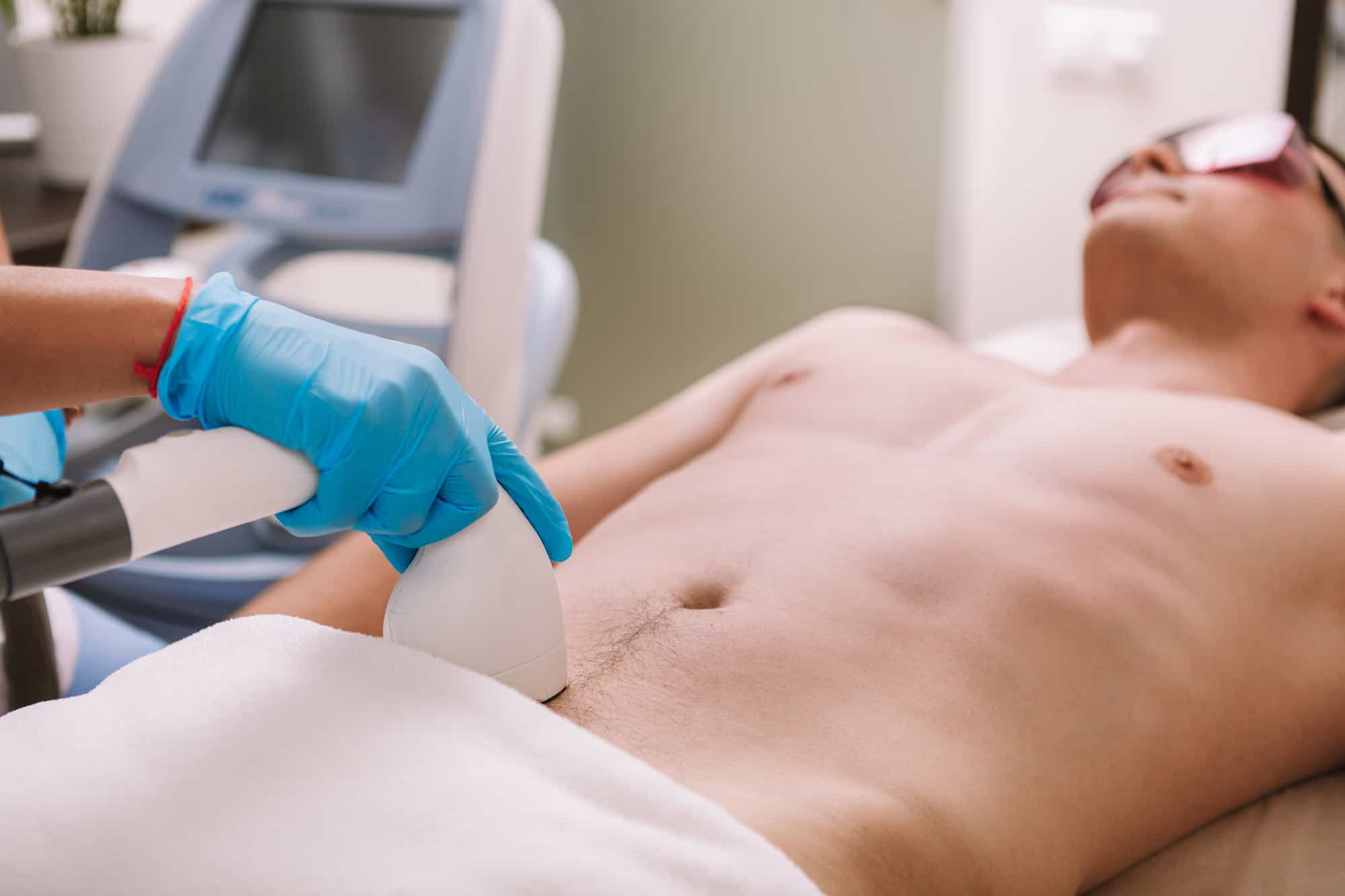 What Does It Mean When A Man Shaves His Pubic Hair? (21 Fascinating Facts)

Hair removal is something most women are well-accustomed to. We even get laser hair removal to avoid using the blade.

However, many men are beginning to care more about their physical appearance and are putting more effort into shaving. But how do you feel when you get with a man who has his pubes shaved?

Men are quite different from women and don't pay as much attention to shaving their pubes. In some way, it’s weird for women to see guys who actually take out the time to get that area well trimmed or even void of hair.

To some, it’s a turn off. But for others, they just want to get through sex without having those coarse hairs rubbing against their thighs.

Some guys, on the other hand, are comfortable with their male sexuality and see no need to get a wax or shave. Regardless of whether they shave or not, they still find girls attracted to them and ready to get down. So if you’ve been wondering why some guys take the razor down there, here are some reasons why men shave their pubic hairs.

21 Reasons Why Guys Do Manscaping

When pubic hairs are left for a while before shaving, they trap a lot of dirt. The male genitalia is different from the ladies, so it would not cause issues for them as it would for women. However, he can end up giving the girl an infection.

Some men do think that a clean-shaven pubic area is more appealing to women. Maybe they assume women don’t like to get hair in their mouths during oral sex. More so, if not taken care of properly, the hair can cause the crotch to smell.

Hair reduces the sensitivity to touch. Shaving pubic hair creates more sensitivity when touched by the opposite sex. Increased sensitivity leads to a better sexual experience with his partner.

4. Their partner wants them to

A number of women like their guys cleanly shaved. Such guys may not care whether they shave or not, they are probably more concerned about the razor burn. As long as she's happy, they are happy. If she likes the hair, they are good at keeping it. If she doesn't like it, they shave it all off.

Certain glands in the armpit and groin produce sweat. The apocrine and the eccrine produce odorless fluid that goes to the surface of the skin. These glands then mix with the bacteria on the skin and produce an odor. It’s one of the reasons guys shave because of the smelly sweat that is produced.

For some, it leaves a map under their armpits and a funny smell when they drop their boxers. Scientists have not figured out if shaving helps with this. However, one thing we know is that you sweat on a cleaner surface.

Have you ever noticed that athletes rarely have body hair? In fact, many have a fully shaved torso. A study by the American College of Sports Medicine shows that swimmers enjoy better strokes when they have shaved. It also revealed that cyclists get the best performance when they have shaved off the hair on their bodies.

It can get uncomfortable when your armpit and pubes are grown. The armpit hair might not itch as much as the crotch area but it can be uncomfortable. Guys then shave to feel comfortable in their skin.

Of course, not shaving correctly can lead to itching that’s why some of them avoid this process entirely. It’s best for them to trim as much as possible before shaving. Or, if he is up for the challenge, waxing or laser hair removal can also help.

Have you noticed how confident your man is when shaved? Shaving his crotch boosts his confidence because he is sure that if he is to engage in oral sex. More so, he won’t have any hygiene problems. He may go out of his way to shave his pubic hair just so the area is clean, sweat-free, and odorless.

The apocrine and eccrine glands produce the odorless liquid that mixes with the bacteria on our skin to produce odor. No one wants to walk around feeling like if they shake too much, others would notice the odd odors coming from down below.

That’s why you’ll notice your man shaving every now and then, and soothing the area with baby oil to reduce irritation.

Overgrown hair in the crotch region can lead to cuts during sex. The friction creates a harsh rubbing that can be avoided when the man keeps the area shaved. What he’d want to avoid are razor cuts and ingrown hairs that result from a blocked hair follicle. That’s why it’s important to hydrate and moisturize the area after shaving.

A shaved crotch speaks loudly to his partner. It shows an innate desire and readiness to get down. Some guys feel like when a woman’s pubes are shaved, she’s indirectly telling him that she’s ready to get down. He won’t want to look like the jackass who isn’t also down for some wild loving. So he ‘prepares’ himself for the sweet lovemaking that may ensue later on.

The male swimwear is designed as trunks or pants. For swimmers that prefer the pants, it shows their inner thighs. For ladies, it is a ritual to shave the bikini line before going for a swim. It is also the same with some guys. Guys that shave have more swimwear options; they can wear pant-like trunks that many others shy away from.

The hair around the crotch can give a wrong impression on the size of his penis. Men tend to take pride in that and it’s a confidence booster for them. Guys, therefore, shave to showcase the full size of their girth in the power play.

A shaved crotch looks healthy and appealing to so many women. They prefer the area clean and smooth. If that’s not your thing, then that’s okay too. I guess you will just have to adapt to his personal grooming regimen.

Americans generally love shaving their pubes and entire body hair. Whilst in most countries in Europe or Africa, the narrative may be different.

Some guys like to have their partners assist them with the task of shaving. They enjoy the process and bonding time with their partners and the play with shaving cream. This encourages them to shave more just so they can relive and enjoy the bonding experiences.

Let's get that right ladies, quite a number of guys do not shave solely for hygienic purposes. Oral sex is better with less hair, that’s why they get a better experience. They not only want to have a good time but also want to ensure their partner is having a good time as well and not fighting through pubic hairs.

Ever heard a man who shaves being called a ‘wussies’? Well, they probably don’t know how healthy those ‘wussies’ are. Shaving off pubic hair reduces the chances of contracting STI’s during sex. It’s better when both parties are well-shaven and clean down there.

Some men shave for aesthetic value. They like how it looks when they are clean-shaven and also enjoy the feeling a smooth skin gives them. This is relatable right? We girls know how we feel when we have gotten a fresh wax.

It is really that simple. Some men shave because they like it that way. It doesn’t have to do with any underlying factor or reason motivating them. Some simply grew up and formed a habit of shaving regularly.

Is it normal for guys to shave their pubes?

Yes, it is normal for guys to shave their pubes. Some guys do not only shave their pubes but the entire hair on their bodies. Others prefer to get a trim while some others just leave it alone.

Why should a man shave his pubic hair?

Most guys get uncomfortable when the hair is overgrown. Plus, shaving the hair could reduce odor and sweat. Shaving can also enhance the sexual experience for them and their partners.

How often should a man shave his pubic hair?

There is no timeline for how often a man should shave, however, some men shave once every few weeks. When they realize the hair is overgrown or they have a date, they shave.

Once the pubic hair starts feeling uncomfortable or unsightly, it may be time to trim the area.

What percentage of guys shave down there?

According to studies, more than 50% of men shave down there often. A smaller percentage shave from the scrotum to the shaft. The take-home here is that men groom themselves as well for hygiene purposes.

Men have every right to shave their pubes. It is not unethical or unmanly not to shave. They also want to look like they take care of themselves, just like us ladies.

I hope this article clears your curiosity as to why men shave. I also hope you found this article insightful. I would love to hear what you think in the comment section and remember to share the article if you liked it.

6 comments on “What Does It Mean When A Man Shaves His Pubic Hair? (21 Fascinating Facts)”