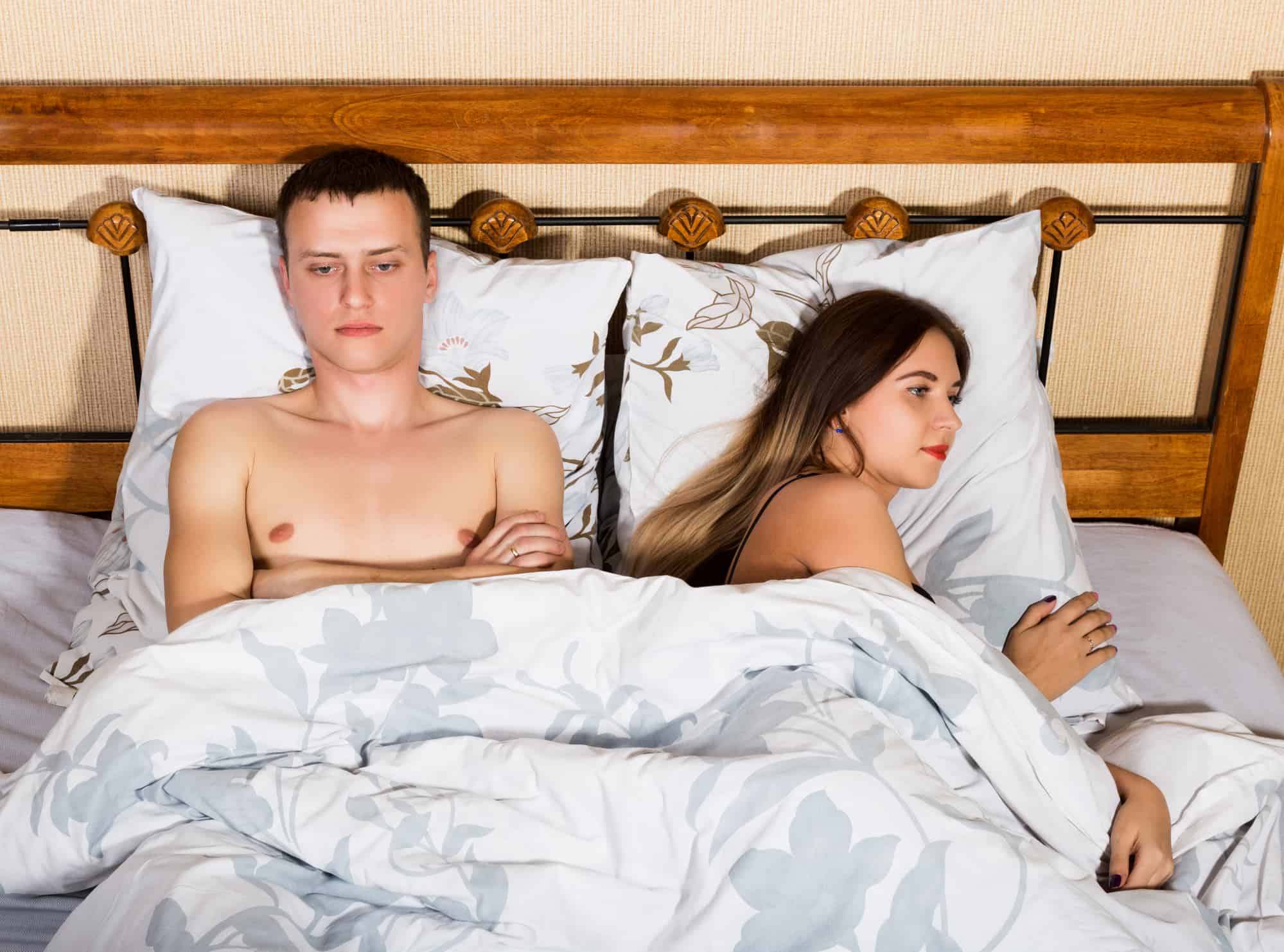 In the dating world, there's a widespread notion that men always want sex any time the opportunity presents itself. So, it sometimes looks weird or should I say impressive when a guy says no to advances from the opposite sex.

For starters, the notion that all men never say no to an opportunity to have free sex isn't true. Many guys out there have discipline and will take more than a cheap seduction to make them jump at any opportunity to get down.

That said, have you been in a scenario with a guy and expected sex to happen but didn't? Perhaps, you are left wondering what went wrong even though your green light bright enough.

Before you start second-guessing your attractiveness or sex appeal, cool your jets. There are several reasons why a guy doesn’t initiate sex even when you clearly want him to as a boyfriend.

To avoid overthinking it, here's an article to help you understand why a guy you slept on the same bed fell asleep and did everything else but not sex.

11 Reasons Why He Didn’t Try Anything

I understand why it may look a bit weird, especially if you and the guy are not plain platonic friends. If he appears to be into you and you also have the hots for him, sleeping together on one bed without any move from him could make you ponder a little. But the truth is, sex is a mood and sometimes, a person isn’t thinking about it.

Perhaps, you went on a date that should naturally end with a steamy session but didn’t. One of the reasons is that the date experience was more chummy for him than steamy or sexy, so his mind may not just be in the sex zone. It doesn’t mean he’s not interested in having sex with you or that the same scenario will play out another time.

Yes, some men will jump at any sex opportunity, but other guys are more patient. It may be that he's the romantic type that wants his first time with you to be special and memorable. E.g., candlelight, roses, beautiful night, and so on. So, waiting for that planned and perfect moment shouldn't surprise you. If you notice signs that he's totally attracted to you, then sex is likely going to happen soon.

3. He doesn’t want to rush things.

It's one thing to have casual sex, it's a different thing entirely to want to be in a relationship. For some guys, getting into bed with a lady is a big deal and a commitment. So, don't be surprised he's waiting or avoiding scenarios that could lead to sex when he's not totally sure he wants to enter the dating space with you. Maybe his past relationship did a number on him. This may be a good reason he fell asleep. He wants to take things a bit slow by spending time doing non-sex activities.

4. He’s not sure you want to be intimate.

If he doesn't get the memo, perhaps, your green light isn't clear enough. He might hold back to avoid being too forward so that he doesn't hurt your feelings. So, it doesn't mean he's not interested, he's probably just afraid of misinterpreting your vibes.

The truth is we all started the sexual journey from somewhere. So, there was a time when we were all novices. If you are dealing with a guy that isn't experienced or perhaps shy, chances are he may not want to make the first move for fear of not blowing it.

So, instead of exposing his nervousness and lack of experience, he'll rather sleep and wait for you to start the "parade" or hope for a more spontaneous opportunity to start a sexual relationship.

Another plausible reason a guy may not make any move is that he respects you. Yes, you may give a clear signal that you are totally down for some action, he may even notice them but want to show you he's not all about getting into your pants.

Not making any move may be a way of showing he's just a nice guy who's interested in knowing the real you. Trust me, girl, it's a good sign he's a mature and good guy.

7. He may be stressed or tired.

I don't need to tell you that stress can be a bummer to just about anything, including sex. In fact, research shows it too. So If your crush is going through a lot of pressure perhaps from work, family, etc., it may be challenging for him to make room, time, and energy for sex.

Yes, he may find time to hang out with you on a morning or night date. But while you are thinking the date should end with some intimate moments, he's probably thinking about having a pleasant night's sleep and a great morning after. He may even fall asleep immediately after an outing.

8. He’s not comfortable with you.

Some men have disciplined themselves, and can’t get down with a woman until they have formed a genuine emotional connection. If you are dealing with a guy like that, you might need to be patient, that might be the reason he hasn’t initiated sex. He’s probably more interested in emotional intimacy than sex.

9. You are in the friend zone

If sleeping together on the same bed wasn't planned, chances are, he may not be sexually attracted to you if he didn't make any moves. Perhaps, you like him and want to be his girlfriend, but you've been friend-zoned without knowing it. Sleeping on the same bed with him won't change the fact that he's not sexually attracted to you, and it won't automatically create sexual chemistry that was never present before.

We are in the era of multi-sexual expression and orientations. Many people are exploring the bisexual niche. Others are trying to decipher which sex path they fit into. So it's possible that a guy may not make any moves when you were together because he's struggling with fitting well into the heterosexual space. You can ask him if you feel the need and also let him honestly know the type of men you are into.

11. He has not yet moved on from a past relationship.

Sometimes, being in a committed relationship for long can make some people find it difficult to explore new sex grounds with other partners immediately or not too long after break up. If you've talked to him about it, try to be patient if you are interested in dating him. With time, you might be able to get him past any anxiety that comes with exploring new relationship territories.

What does it mean when a guy doesn't try to sleep with you?

For starters, it doesn't mean you are not an attractive person. It could just mean he's not drawn to you because you are not his type. It may also mean he's taking things slow so that he doesn't offend you. Furthermore, some guys are just shy or inexperienced, so you might need to give him a push to get the "show" on the road.

How do you get the guy after you slept with him?

The first thing you need to do is to play it cool by not being clingy or demanding attention because you allowed him to get to the "cookie." Give him some space to let him chase you. In case you feel he got into your pants too soon, you can make yourself scarce a bit to build up his desire for more. But make sure you keep the communication line open so that he doesn't think you are no longer interested.

Does sleeping with a guy too soon ruin it?

There is no textbook for a successful or perfect relationship. Similarly, there's no official rule that guides the time to have sex with someone you just met. However, it's best not to rush it. It gives you the opportunity to know who you are dealing with and also prevents you from making an impaired judgment based on an orgasm. Still, it doesn't automatically mean sleeping with a guy on a first-night date will jinx your chances of having a lasting relationship.

Do guys get mad if you don't sleep with them?

It is possible that a guy can become upset if you deliberately tease him and toil with his emotions when you know you have nothing to do with him. Also, some guys feel entitled to sex because they took you to a fancy restaurant and bought you nice things. While that's not cool, it's also wise not to rush anything so that no one feels like they were used.

How do you tell if a guy doesn't just want to sleep with you?

A guy that finds you attractive and wants to have sex with you will flirt and initiate physical contact or sex-related touch to suggest he wants you. If he doesn't want to sleep with you, he'll mostly avoid touching you. If you are talking regularly, he'll likely avoid engaging you in a sexually related conversation. What's more, he won't invite you to places where you can be alone with him, unless you are platonic friends.

If you find that a guy seems withdrawn from making the first sex move, it may be one of the reasons above. You can also make the first move or talk to him about it because sometimes, men don’t know better. Hope you enjoyed the article. Please feel free to comment and share the article with friends.

You May Also Like
Need To Spice Up Your Sex Life? (201 Of The Best Places To Have Sex)
1 Comment
How To Tease A Guy (51 Raunchy Ways To Excite Your Partner)
1 Comment
My Husband Is Bad In Bed (11 Ways You Can Make It Better)
No Comments