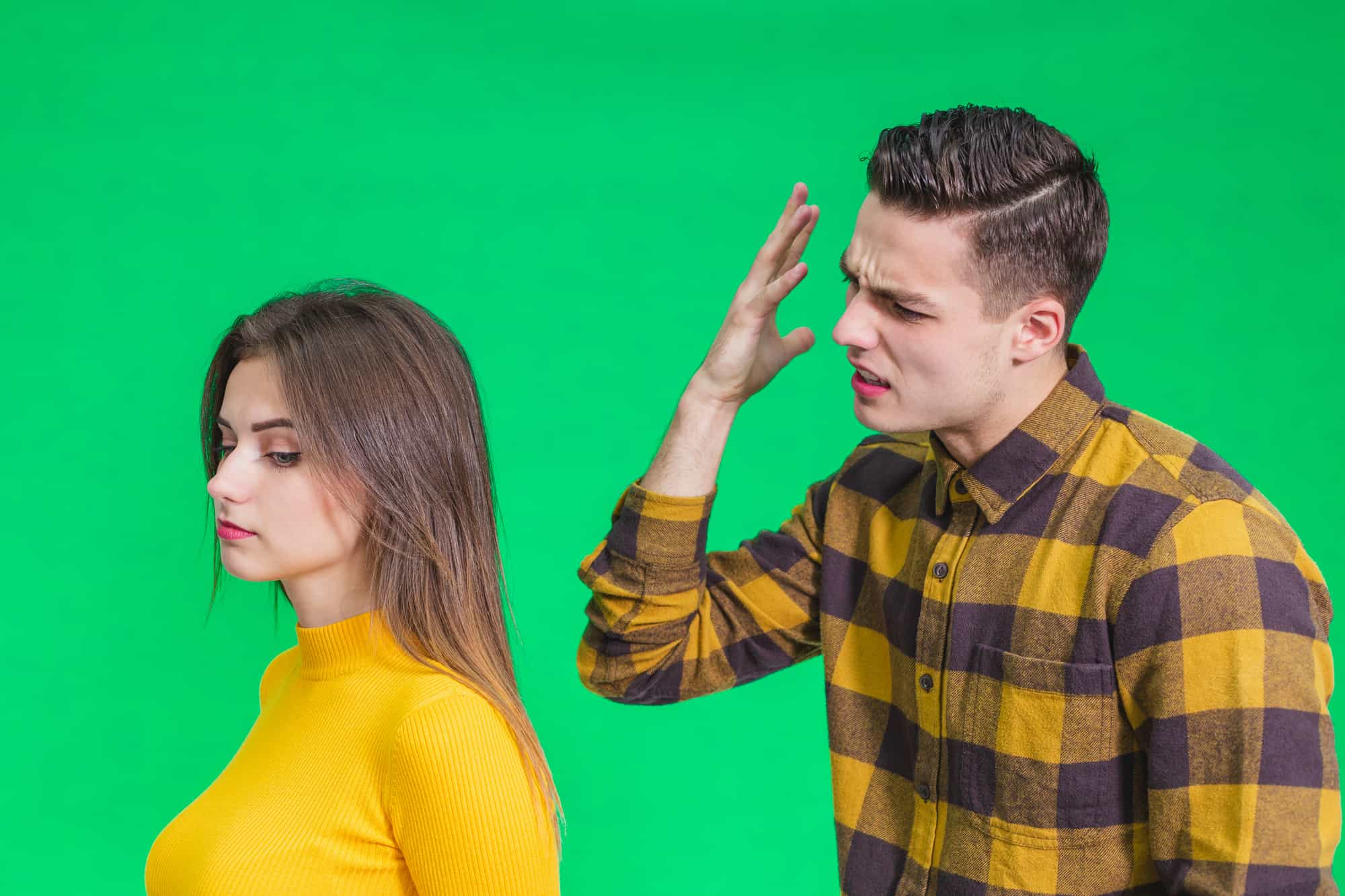 If you want to know what being in a toxic relationship feels like, try dating someone who loves to play the victim. They are a unique set of people who feel trapped in an unhealthy mentality, and this leads to distress and significant pain. People with such mindsets come with a level of emotional chaos that is difficult to point out.

It takes a degree of self-awareness to figure out what is happening and why you are the one who is to blame, who is always sorry, and who is grossly imperfect in the relationship. Relationships like this can be especially draining when you aren’t sure of what you are dealing with.

Here are some signs that should tell if you’re with someone who has a victim complex.

1. He believes he is perfect

People that spend so much time focusing on what other people are getting wrong than on themselves definitely have a complex. They believe they are blameless and everything happening to them is a result of another person’s actions.

2. He compares a lot

No one has it all, and in reality, we are all struggling with different issues. However, a partner that pushes blame a lot feels he’s the only one struggling. Such a person continually compares himself to others; he is reluctant to acknowledge his privileges and believes he has it worse than other people.

Often, people who see themselves as victims struggle with low self-esteem, and this only compounds their issue. Sometimes a person who believes others are the cause of his problems lacks self-love and sees himself through a negative lens.

Knowingly or unknowingly, a person with a victim’s mentality engages in self-sabotage. They feed themselves negativity for so long that it takes roots in their minds. So, when faced with difficulty, they find it tough to bounce back. If you notice he is quick to undermine his abilities, then, he most likely has a victim mentality.

5. They are not assertive

People who think they are victims have difficulties setting boundaries in relationships; they have no sense of limits because they want to please everyone. This stems from their belief that perhaps, if everyone likes them, then they won’t be victimized and good things will happen to them.

6. They do not have long term friends

If you suspect your guy likes to play this card, try asking him about his friends; listen and take note of how many are long-term friends. You are likely to hear statements like; “I cut him off, he was toxic”.

If his reasons for doing so do not reference something abusive or dangerous, then you have your confirmation. you are indeed dealing with a guy who blames everyone but himself for his shortcomings.

7. You feel responsible for his happiness

Victims find it difficult to take responsibility for their happiness. They believe it is someone else’s job to make them happy, especially if that person is a loved one. Relationships like this can be draining because sooner or later, you unconsciously start to put their happiness ahead of yours regardless of the discomfort it gives you.

8. They are not forgiving

Victims love to ride on pain, so when you hurt them, they feel compelled to hold onto that painful memory. They cannot let go and forgive; instead, they are quick to remind you of such painful memories.

9. They dwell in self-pity

When it comes to throwing a pity party, no one does it better than a person who has a victim mentality. While this may appear immature to a lot of people, the person uses it as a coping mechanism for times when others are not willing to show empathy.

A partner who always sees himself as a victim is unwilling to show interest in problem-solving. They have the habit of allowing life to happen to them instead of taking charge of events. When bad things happen, the victim is more likely to crawl into his shell and give up rather than seek out alternatives and possible solutions.

11. They never run out of excuses

Does this person always come up with a flimsy excuse for their actions? It’s never their fault; it’s always something or someone else. A person with a victimhood mentality would rather come up with a million excuses to explain his actions than take responsibility.

As with anyone who suffers from low self-confidence, people with a victim mentality are always self-conscious. That is why a simple joke about them could feel like a personal attack. They flare up at the slightest sense of a provocation for this reason.

One minute things are good, and the next minute, things are sour. Being in a relationship with someone who plays the victim often feels this way because even when things are going well, they still find it easy to dig and bring up old sad memories that can lead to fights.

14. They are easily triggered

A way to spot someone who has a victim mindset is by their inability to choose their battles. They treat every disagreement and dispute as an attack, failing to realize that they have a choice to choose what arguments to get involved in, and that’s why they always have their guards up.

15. They are not on good terms with their exes

It is normal for people to drift apart after a relationship ends. However, regardless of how such relationships end, some people always manage to remain friends with their exes. Does this guy badmouth all his exes? Does he keep talking about how they all didn't love him, deserve him or respect him? Then there’s a sign right there.

16. They believe they are specifically targeted

As the title implies, people who have this kind of mentality always believe others are out to get them. When bad things happen to him, he blames others and chooses to believe the worst about everyone even when that’s not the case.

17. They hold onto negative thoughts

As with painful memories, the victim holds on dearly to negative thoughts, and he allows it to influence his actions. They hold onto grudges like weapons, ready to point them at anyone who dares to challenge their actions.

18. They have trust issues

Does this person have past experiences where someone betrayed their trust? How did they handle it? People like this will let a bad case in the past rule how they trust people in the represent and future.

Have you been with someone that always misinterpreted what people say or do to him? They make comments about what the person ‘actually meant,’ when that’s not even the case.

The victim will do anything to get out of taking responsibility for his actions. He is incapable of acknowledging his errors or how he may have contributed to his misfortune because he believes it is the fault of everything else but him.

21. They allow other people to determine their lives

It almost feels like they do not have a mind of their own. They do not mind family members and friends butting into their business or relationships.

The primary reason why being in a relationship with someone who has a victim mentality is considered toxic is because they are selfish. They do not regard your opinion, yet expect you to respect theirs and empathize with them.

If your boyfriend quickly throws in the towel when faced with difficulty, he may have this mentality. He feels whatever is happening to him is beyond his control; therefore, he must surrender to life.

24. He is resentful when you are happy

A person with a victim mentality expects the world to revolve around him. So if he notices you are happy away from him, he finds this upsetting and might even resent you for it. This is because your happiness makes him feel rejected and undesired.

A victim will not make progress in his life because they believe they are not responsible for what happens to them in life. Your guy probably hates where he is yet; he does not have a plan for where he wants to be. That is the classic act of victimhood.

How do you deal with a victim mentality in a relationship?

A person with a victim mentality likes attention, so devote your time to listening and empathizing with them but do not always agree. You must point out your boyfriend’s patterns, so he understands his behaviors; however, choose your time and words wisely.

When people have a victim mentality?

Most times, people do not know when they have a victim mentality, and this can make it difficult for their loved ones to help them. They cannot handle constructive criticisms and see every attempt to help them as an attack.

Is a victim mentality a personality disorder?

What does it mean when someone always plays the victim?

A person with a victim mentality is someone who believes he is the victim of the harmful actions of other people. He does not take responsibility, so he would always come up with an excuse to explain why things happen to him.

What is narcissistic victim syndrome?

Narcissistic victim syndrome is a term that describes the effect of narcissistic abuse. Someone who has been in relationships with a narcissist can easily experience this syndrome as a result of domestic violence and emotional manipulation.

People who like playing a victim can become experts in manipulation and bullying which leaves you feeling drained and guilty. I hope this article helps you to identify the signs early enough before it starts affecting your overall well-being. If you enjoyed reading this, please leave a comment below, and don’t forget to share.