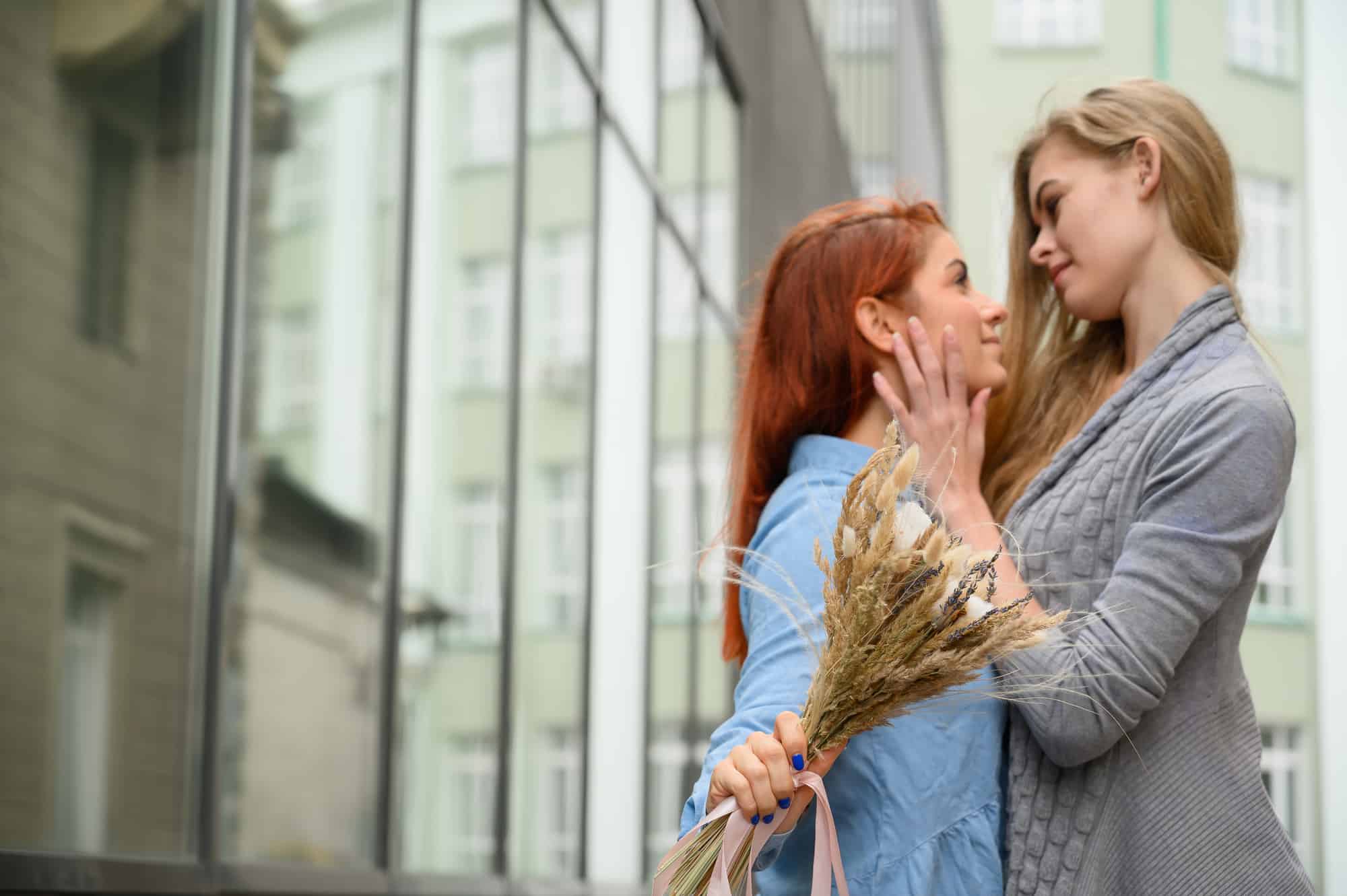 Attraction is a tricky subject; sometimes it’s comprehendible, while other times, it’s not. This can easily be said for many straight women who have felt confused about their sexual identity. Being heterosexual leaves no room for doubt on who you want to have sex with, but being attracted to another woman can be quite puzzling.

You’ll find many women asking, "If I look at, or admire another woman, does this mean I’m bisexual?" There are many cases where even celebrities have admitted some attraction to other women, stating that they found other women more sexually appealing.

To tell you the truth, this occurs commonly with straight women. Trying to understand why this happens will take some in-depth study on the subject, and thankfully, I have listed 8 reasons why a straight woman would find another lady attractive below.

Why They’re Attracted To The Same Sex

It’s common for people to be generally attracted to the appearance of others, particularly, their faces. Things like facial structure or shape can deeply affect your interest level. In many cases, women possess attractive facial qualities, which can make even other straight women feel sexually attracted to them.

These particular facial qualities may be what you also deem attractive in the male gender, but unknowingly, also pulls your attention towards the female gender. In order to determine why you’re attracted to a woman, even though you’re straight, then pay close attention to her facial features, and compare it with the men you’re usually interested in.

It could be the symmetry of the person’s face, or perhaps, just an average look. While people may prefer a chiseled jawline, others would seemingly prefer simpler facial features. All these features you admire in a guy can add up to why you’re suddenly sexually attracted to women, even though you’re straight.

Familiarity forms the basis of interest for most people. Sometimes, we’re intrigued by certain things because they knowingly or unknowingly remind us of something dear to us. You can easily be interested in having sex with someone because they remind you of another person, this could be an ex-lover or even a best friend.

That feeling of closeness, draws them to you, without you noticing it at first. Though this scenario is understandable for interest in the opposite gender if you’re straight, in some cases, it can also happen with the same gender. A woman can surprisingly remind you of an ex-lover, and the interest would be intense because there’s a familiarity with someone you’ve had sex with before.

This will create an incomprehensible urge to want to interact and be close to this person, irrespective of the gender. If you can’t acknowledge the fact that familiarity is causing the interest, you will be confused about your sexual interests.

Scents have an amazing way of piquing interest, this is especially true when explaining pheromones in heterosexual situations, but in other cases, it can also be true for similar genders. The human senses are generally moved towards particular scents, and this can cause different hormones and emotions to change continuously.

The pheromone being produced by this person may not necessarily be causing the interest. It could be as simple as the type of perfume the person used, which brought back a nostalgic feeling. The more we associate with things that bring valuable emotions to us, the more attractive the person wearing it may get.

Therefore, the reason why you suddenly feel interested in someone of the same gender is probably because of the scent that person is emitting. Scent can be in different forms; natural and artificial scents. If you want to determine if certain scents are causing an interest, then pay close attention to how they make you feel.

‘Does admiring other women mean I’m not straight?’ ‘Does this mean that I am now into women and men? Similar questions have probably been running through your mind. Here’s the thing, women are naturally very attractive, we put our time and money into looking good, smelling nice and looking absolutely gorgeous.

It’s perfectly normal to look at another lady and go “wow! She’s pretty.” At least you wouldn’t be the first. Women tend to have that sex appeal and the fact that you noticed it may not necessarily mean you’re bisexual.

In a nutshell, admiration is a common reason why many straight women feel confused about their sexuality. Though admiration can sometimes run deeper, especially when you’re immersed in the idea that the woman in question is pretty, sexy, and more, you’ll notice that when those thoughts dial down, the intrigue dissipates as well.

Admiring other women is normal, and easily reveals you’re good at noticing good things in people. Closely monitoring how you feel will determine if there’s something more, or not.

According to studies, changes in the hormones of a woman can greatly affect her decisions in sexual partners, or even interfere with her sexual preferences. Studies have indicated that women who either stopped or started taking the pill when they were in a relationship with someone, often complained of dissatisfaction in their sex life.

This was different for those who never took the pill throughout the relationship or those that were using the pill throughout. Though studies have not proven that a change in pill intake can spur up confusion about your sexual orientation, it’s certain that changes in your hormones can cause it.

You may begin to have certain urges to try something new, or perhaps, switch up your sexual partners. If this is happening to you, then check if you’ve recently switched or started any medication that might be causing hormonal surges.

A person’s character can actually affect the level of interest people will have in them. We instantly feel closer to people that do good things for us. As a matter of fact, studies have revealed that kindness is one of the most attractive qualities in an individual. People tend to unconsciously rate a person’s attractiveness on a high scale when they know they are kind.

There’s a probability that your sudden interest in people of the same gender as you, is as a result of a particular character trait exhibited. Has this woman been especially nice to you? Has she helped you do something, taken care of you, or just listened when you were venting? It could be the reason you suddenly feel this closeness and new attraction to the lady.

This may or may not be a determining factor of your sexual orientation, it may simply prove that you, like everyone else, are attracted to a number of good qualities in people.

The human body responds to certain activities in multiple ways. One common action that can be associated with interest, is the release of chemicals. This makes it quite understandable why people express interest in different ways. The brain releases the reward chemical called dopamine, when we experience something good, like spending quality time with someone, or family members.

It is also released when people get intimate. The brain also releases the happy chemical in high quantities called serotonin, when attraction occurs. That could be the result of little actions such as enjoying someone’s company. Lastly, the love chemical called oxytocin is released when physical contact like holding hands or hugging occurs.

Therefore, a lot of little actions can actually cause you to feel more attracted to women despite being heterosexual.

Contrary to popular opinion that opposites attract, in most cases, people crave to have similarities with one another. It makes you feel comfortable and safe, simply knowing that you have someone who can relate with everything you’re saying and going through. Meeting someone who instantly shares a ton of similarities with you isn’t something that happens every day.

However, when it does occur, there’s a spark, otherwise known as an instant interest. You would want to spend more time with this person, and possibly build a profitable relationship. Similarities form the foundation of most interests and can make even straight women interested in having sex with other women. This may push you to think you’re bisexual, but it all depends on how you channel that interest into actions.

What makes a woman attractive physically?

There are multiple things that can make women physically attractive. Facial and body features play an important role in physical interest, but according to science, other subjects such as scent, character, and even fertility can affect the physical interest of people to women.

Is it normal to be attracted to both sexes?

According to research, no one knows the cause of heterosexuality, neither is it believed to be subject to human choice. However, according to scientists, it can be influenced by genetics, hormones, and even environmental factors.

What attracts a woman to a man physically?

There are a lot of things that can cause physical attraction between men and women. It can be dependent on facial features, body shape, masculinity, and even a healthy appearance. More so, other factors like personality, character, and even hormones can affect physical interest.

What causes attraction between man and woman?

There are many factors influencing attraction between all men and women. Factors like character and similarities can dictate the level of interest that could occur between men and women. Women have naturally been drawn to the male masculinity for years, their macho build, the sense of protection they provide, and of course other personality traits that are peculiar to each woman.

Did you find this article insightful? Remember that a straight woman being attracted to someone of the same gender doesn’t necessarily affect their sexual orientation. It could be occurring for a number of reasons. Here’s the bottom line, take some time to understand why it’s happening before concluding or taking action.