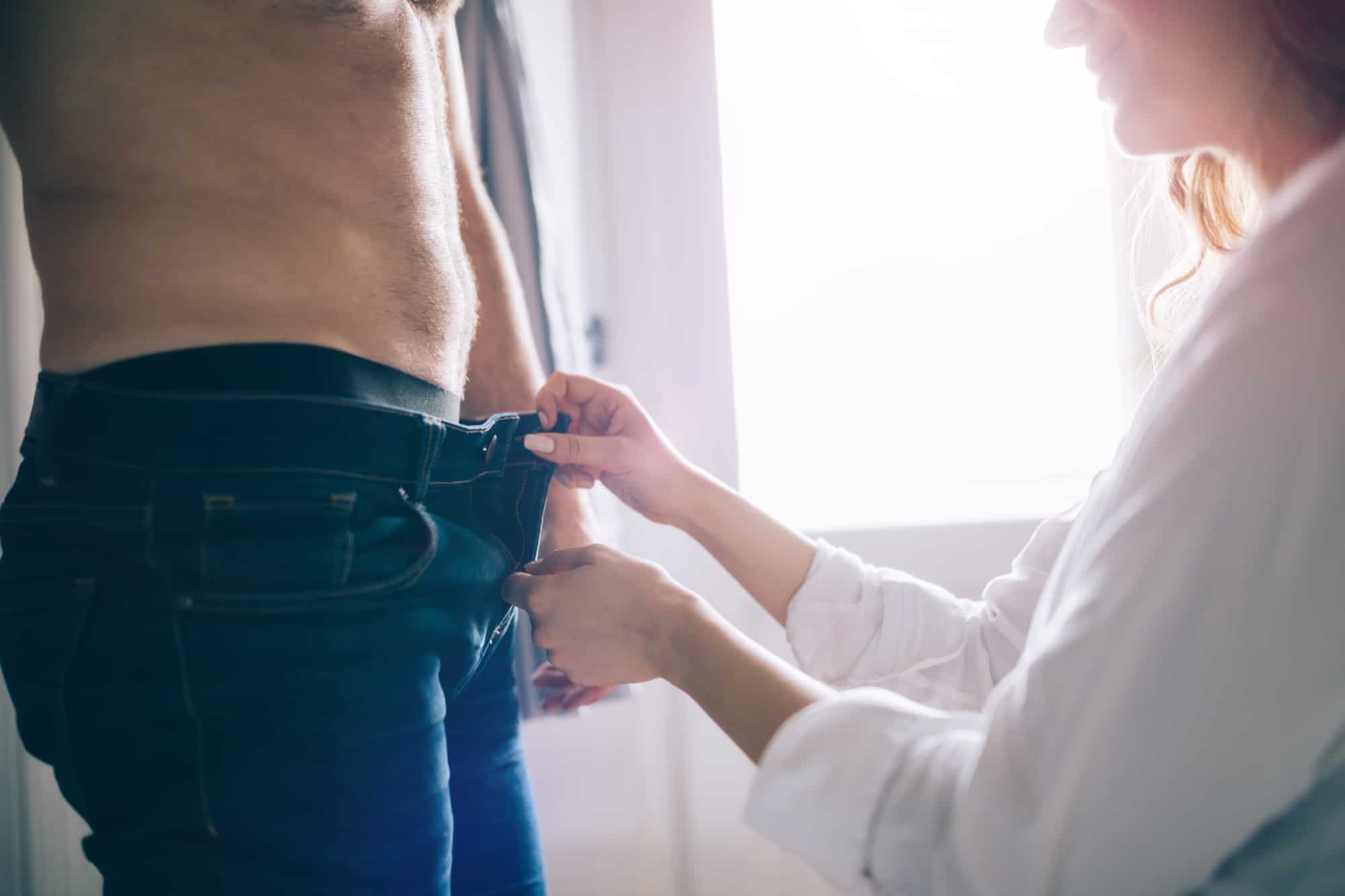 Should You Spit Or Swallow? (17 Factors To Consider)

There’s a big debate on the ‘spit or swallow’ options women have during oral sex. Many prefer to consume and have reasons to back up their actions, while others aren’t convinced that it’s worthwhile or even healthy.

Significantly, there are many unanswered questions about semen and its properties – whether it’s healthy enough to swallow, or merely good enough to enjoy the moment.

This article will aid women in deciding whether it’s profitable to either swallow or spit out semen.

If you ask me, the way you intend to take charge in the bedroom shouldn’t depend on a ‘spit or swallow’ debate. If the rain pours, you could decide to spit or swallow depending on how you feel about it or the intensity of the moment.

To enjoy the sexual relationship with your partner without limitations, you need to know some specific things about sperm. We’ve included prudent factors to consider on spitting and swallowing sperm, whichmight changeyour perspective. But before we begin, it’s important to read these insightful things about semen first.

Semen is widely believed to comprise only spermatozoa, tiny tadpole-looking organisms that sponsor reproduction. However, semen isn’t only sperm, but also body fluids and water. Semen contains roughly one to five percent of sperm, while the rest is made up of seminal plasma. The seminal plasma, on the other hand, has up to 80 percent water.

Semen has a syrupy or thick consistency, with a somewhat creamy color. In other cases, the color of semen can be perceived to be either yellowish or greyish.

Is It Safe To Swallow Semen?

As explained earlier, semen’s components are mostly liquids than sperm itself, making it relatively safe to ingest. There are rare cases where people experience allergic reactions from swallowing semen. If you experience such, it’s advised to desist from consuming. However, semen is considered safe to ingest in every other case.

Semen is generally ingested in the body like all other foods due to its natural properties. It is also considered to have various healthy compositions, which encourages some to swallow instead of spit. There are ways people make sperm taste even better, which would sponsor more swallowing than spitting.

Are There Health Benefits Of Swallowing Semen?

There are some health benefits associated with the properties of semen. Semen is considered to have a protein composition according to some scientists. However, the average amount released is too small to pose any dietary benefits in the body, making its high-protein content unprofitable.

The amount of protein in semen varies from person to person and depends on factors like age and diet. Semen also contains other healthy components such as sugar, calcium, sodium, citrate, zinc, and more. Though it has these properties, semen is not as caloric as widely believed. It contains about five to seven calories in every ejaculation, which is too little to make any changes to your body.

Why Do Men Not Like It When You Spit?

Spit Or Swallow (17 Factors To Consider)

The most critical question you need to ask yourself when thinking about whether to spit or swallow is what you want. Women that swallow would confess that they do what they want, irrespective of how it might make their partner feel. They make their decisions based on personal preference, and it’s up to you to decide what you want for yourself as well.

Many women think about the smell of semen when considering whether to spit or swallow. Does it smell bad? The truth is, semen has a chemical type of smell due to its high level of alkaline. The sperm of some men can particularly smell off and might be due to specific factors like hygiene and diet.

Some women prefer to be polite and swallow during oral sex, irrespective of what they want to do. If you’re conscious of your partner’s feelings in such a situation, or you know he’ll feel bad if you stick to your preferences, you can be polite instead. You can choose to be polite in situations you deem fit, and stick to your personal choices in other scenarios.

A major determining factor on whether to spit or swallow is the taste of semen. Many women need to know how semen tastes before considering consuming it. Semen doesn’t have a general flavor.

The taste might differ based on the guy involved but can taste better if he ingests some specific types of foods. Foods that make sperm taste good include cinnamon, nutmeg, pineapple, and more.

5. Does it have calories?

Widespread knowledge suggests that semen has many calories, which may be a concern for those concerned about putting on any weight. Though semen contains some components like lactic acid, vitamins, and even minerals, the number of calories it produces compared to the total amount of semen is relatively too small to make a person gain weight.

6. Will he feel special?

Men have indeed confessed that a lady swallowing their semen makes them feel special. This act doesn’t disrupt the feel-good process and makes the moment even more memorable. If you’re considering whether to spit or swallow, this point can be a guiding factor.

7. Where will you spit it out?

Most women that decided to spit out have expressed their confusion on where exactly to spit out. This makes them resort to swallowing, instead. Looking or asking for a place to spit can come off as rude, which many would prefer to avoid by choosing to consume.

Another factor that would determine whether a woman would spit or swallow is the consistency of the semen. The texture can quickly put ladies off and make it quite challenging to consume. If a thick consistency of liquid would not irritate you, you might have no problem ingesting it.

Many women are willing to do things for their partners as long as it makes them happy. Irrespective of what they want, they remain faithful because their partner’s desires in the bedroom are also important. If you feel this way too, the decision to spit or swallow will seem much more straightforward.

Many believe that semen has some anti-depressant and stress-relief properties. According to research, women exposed to semen were in better moods and felt less stressed. Although this can be associated with having sex in general, no one is sure whether swallowing was the cause.

11. Are there health benefits?

According to research, semen contains some natural properties such as melatonin, which can help regulate sleep. Significantly, those who have insomnia can reap the benefits of ingesting this substance. Semen also contains properties like vitamin C and antioxidants, this could change someone’s perception of spitting or swallowing.

12. How does he feel about spitting?

Men feel different ways about ladies spitting out their semen from the mouth. Although some would prefer them to swallow, others may not be affected by her choosing to spit it out. Regardless, it would help to know his opinion about the subject if you’re considering what to do. This can further aid in your decision-making.

There is a small percentage of people that are allergic to semen. This means that swallowing makes them feel sick, otherwise known as human seminal plasma hypersensitivity (HSP). It’s important to consider this factor before choosing to swallow. If you have a history of getting sick by consuming semen, you should communicate this to your partner, and desist from ingesting.

14. The highlight of the moment.

Many would attest to the fact that spitting indeed ruins the moment in comparison to swallowing. For this reason, many women swallow to crown the moment and get a fantastic look from their partner’s face. His feedback could be what propels you to consume instead of spit.

15. Are you overthinking it?

One of the primary reasons women are indecisive about this subject and don’t want to swallow is because they are overthinking the situation. You might have no real reason to dislike swallowing. Overthinking might be what is making you hesitant. Women who swallow have been found to put little to no thought into the act.

16. Are there side effects?

The side effects are crucial for determining whether swallowing is a worthwhile option. If you’re going to be having oral sex with anyone, you have to ensure they don’t have sexually transmitted infections. Also, the high level of alkalinity in semen can indeed upset your acid reflux and cause some problems.

17. Will you be happy swallowing?

Everything boils down to this final point. If you won’t be happy swallowing or might regret it later on, it’s best to communicate this with your partner, and preferably stick to spitting out. On the other hand, If you will be happy swallowing, you should go for it without hesitation.

Is it safe to spit or swallow?

Whether a woman spits or swallows, both are risk-free decisions. Swallowing semen is safe because it’s an ingestible substance with somewhat healthy properties. However, a small percentage of people might be allergic to it. Spitting, on the other hand, is safe but might only upset your partner.

What happens if you swallow spit?

Swallowing spit is a regular occurrence for humans and is unconsciously done to ease the throat’s dryness. Saliva also contains a variety of enzymes that help the mouth identify specific tastes. Swallowing saliva is entirely safe and poses no adverse effects.

How often do you swallow spit?

Swallowing spit can be associated with the natural act of breathing. Humans swallow an average of 500 to 700 times a day and might consume more when eating. While asleep, humans still swallow spit, but less frequently than when awake.

What does swallow mean in slang?

Why do humans swallow saliva?

Saliva has many practical purposes for humans. It aids digestion due to its numerous digestive enzymes. One unique enzyme in the saliva is amylase, which helps break down carbohydrates for digestion. Saliva also helps to ease the dryness of the throat, especially when talking for a long time.

Did you enjoy this article on whether to spit or swallow? Remember that your decision should mostly be made depending on your personal preference. If you want to try something out of your comfort zone, this is a cool way to do so, plus, it’s also a risk-free decision. In a nutshell, be happy with whatever you choose to do. Kindly leave a comment below and share this article if you liked it.

One comment on “Should You Spit Or Swallow? (17 Factors To Consider)”