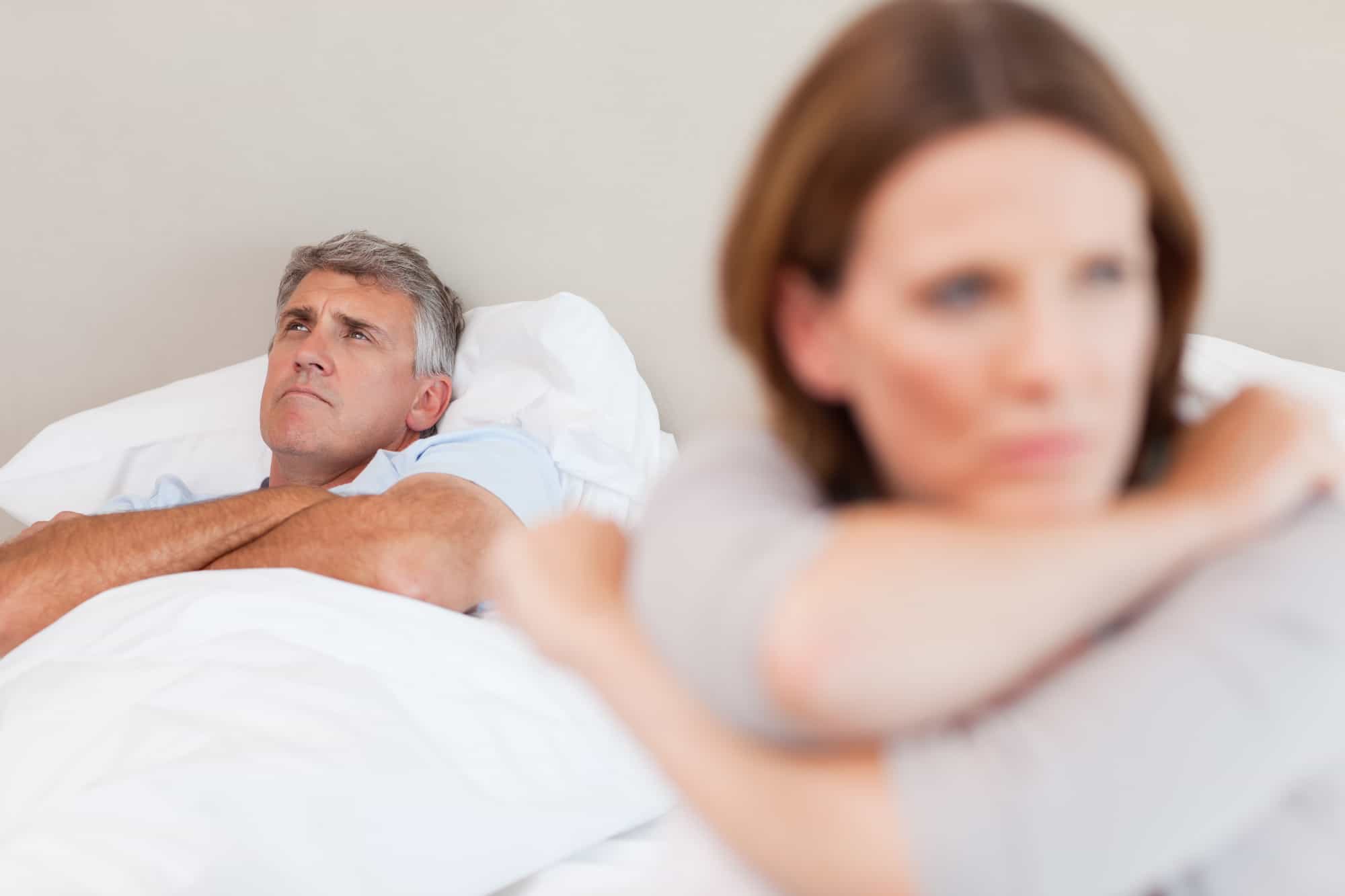 Is He Sexually Deprived? (9+ Possible Clues)

Sexual deprivation is a real thing, it means your partner is feeling frustrated and unsatisfied with the sex in the relationship. Well, it happens! You could be having a good time, while your spouse still has his needs unmet (a little selfish, don't you think?).

There's a lot more to sex than meets the eye, it helps create a connection between couples. For a lot of individuals, sexual satisfaction is linked to their confidence, self-worth, general excitement, and self-esteem. Your partner isn't getting the validation he seeks, the connection he wants (needs), and the excitement that sex brings; that's what's missing.

In any relationship, sex life matters, it’s one of the ways to express love and things like dissatisfaction may have some side effects on the relationship. When you begin to pay attention, you will see signs that tell you he wants it bad.

10 Ways To Tell Your Man is Sex Deprived

1. He gives you the cold shoulder

Love may be one of the things you’re primarily focusing on, but your spouse feels the need for more ‘sexual action in his life.’ Sex is a form of validation for some people, it helps them validate your feelings for them and their feelings for you as well. When that doesn’t happen at all or as often as they would like, it’s only reasonable to withdraw.

Simply put, giving you the cold shoulder helps express his feelings, especially if he does it when you need his help with something. It has nothing to do with the love he has for you, but more about his waning sex life.

2. He’s always talking about it

A man who gets no sex will talk about sex all the time. He would find a way to include his naughty desires in every conversation you try to have with him. This usually happens to the men who get a general excitement from good sex, it would always go through his mind until he gets a fix.

Sex may not be a priority to you at the time, but it probably is for him. It’s one of the things he looks forward to and the way he expresses love. When your partner mentions sex to you multiple times in a day, if that’s not an unmistakable cry for help, I don’t know what is.

Sex is a method of communication and intimacy, it’s one of the things couples do to express love. Once love-making becomes more like an activity, the relationship may directly suffer from it. The most genuine heart-to-heart conversations couples have usually happen after good sex.

Releasing all that energy and toxins help clear your minds and build a reliable connection between you two. Your partner would feel disconnected from you without the regular action, that disconnection translates to less interest. He wouldn't want to hang around you as much, most times he would have nothing at all to say.

Certainly, when you man’s love life is suffering, he’ll want to take his mind off things to keep him distracted from the feelings his body is stacking up. More so, he would take all that sexual energy and focus on work, or a skill he’s been trying to learn. He's simply looking for another way to relieve himself of the sexual tension.

So, putting in more hours at the gym, at work, spending more time playing the Xbox, would help him get it out of his system (for a while). The extra investment in something else is only a distraction, and it doesn't last very long. Moreso, he doesn't feel as connected with you as he used to when your love life was still very active.

This man's emotions would be all over the place. You can hardly tell what mood he would be in when he gets home from work or comes out of the shower. Sexual deprivation can mess with a person's emotions badly; they become triggered very quickly, you're not sure what would put him off next.

Sometimes, his emotions would be so hidden, there’ll be no expression or reaction to the things he would typically react to, he’ll be too calm, in a worrisome way. Like I said, sex gives an excitement to some people, perhaps, he's one of them, and right now he's not excited about anything at all.

It surprises me that it's possible to miss a sign as clear as this. Whether he's making subtle suggestions or asking you to sleep with him directly, your constant refusal equals frustration.

Consider yourself lucky if he's even asking, some men don't breathe a word about it at all. Others proceed to make physical advances like an ass grab, a long random sensual kiss, hand in thigh, and other moves that scream ”I want your body” even in public.

He would lack the natural energy he used to have around you before. For no reason, he would be unmotivated to hang around you or do anything with you. However, he would be fine doing activities that involve other people.

Sexual frustration is the fastest way to kill the vibe between two people in a relationship, especially if they shared good chemistry in that area. If the sex deprivation is as a result of an illness, injury, or a matter of self-esteem (he's not good in bed) he would not be keen on the idea for a while.

Oh, yes! It can cause depression. A lot of men don't know it, but they're too dependent on their sexual life for excitement, and when they get denied they roll into a ball of sadness. Most times, this lack of arousal or quick ejaculation is a side effect of some other underlying issue. In other words, sex may not be the main reason or solution.

He may forget that sexual desire is temporary and drown too deep in thoughts. Sexual deprivation that's not dealt with as soon as possible could damage the emotional balance of the relationship. If you notice anything unusual about him; like him giving off negative energy, being aggressive, or ignoring your feelings, these are strong signs of sexual deprivation.

Your partner can develop reckless behavior as a result of sexual frustration. He would become more careless towards you, speak out of tone, be forgetful, and sometimes clumsy. At first, you may not understand what's going on in his mind; it'll seem odd.

Sometimes, this reckless behavior is a way to seek attention, or he's taking the frustration out on himself. The action isn't typical, and as a result, not easy to pin as a side effect of sexual frustration.

As I said earlier, the most he can do is distract himself temporarily. After a while, he would start

looking for options like ‘self-sex’ or another woman. At this point, some men are willing to have a one night stand to fulfill their desire.

Sex may not be a priority to you at the time, but it's not worth hanging your partner out to dry. Step out of your comfort zone and think about different ways to spice up things in the bedroom, your relationship will thank you for it.

How do you know if you are sexually deprived?

Sexual deprivation is when your sexual needs are not being satisfied. It could be that you want to have sex with your partner at the time and he doesn’t or you’re unable to explore a certain sexual craving.

What happens when you’re sexually frustrated?

Well, sexual frustration signs show differently on people. You might take it out on yourself; fall into depression, anxiety, or lack of self-control. You might take it out on your partner by resentment, anger, or pressure. Some people even feel the pain or pressure in their sex organs. However, these signs could end up affecting the relationship if not probably dealt with.

What happens when a man is sexually frustrated?

He’s human, so, naturally, he would react the same way you would. Either he is taking it out on himself or the person (you) who is depriving him of his sexual desires. On the other hand, men are more likely to focus that sexual tension on something or someone else. Sometimes he could act very recklessly as a result.

What’s it mean to be sexually frustrated?

It means you are either not getting any sexual activity because you can’t and have no partner, or because your partner doesn’t want to, or you are getting action but not in the way you would want to, hence, the frustration. Sometimes it's the lack of arousal or multiple orgasms that drives you through the wall.

How do you tell if she's sexually frustrated?

She would have an intense desire for sexual activity. They are women who say they feel the sexual frustration in their genital organs. Sexual frustration can show as coldness, anger, aggressiveness or hostility towards the person she desires.

I'm sure this article has pointed you to signs that will help you confirm if your partner is feeling deprived. I would like to know your thoughts; comment below and please share this article.

2 comments on “Is He Sexually Deprived? (9+ Possible Clues)”