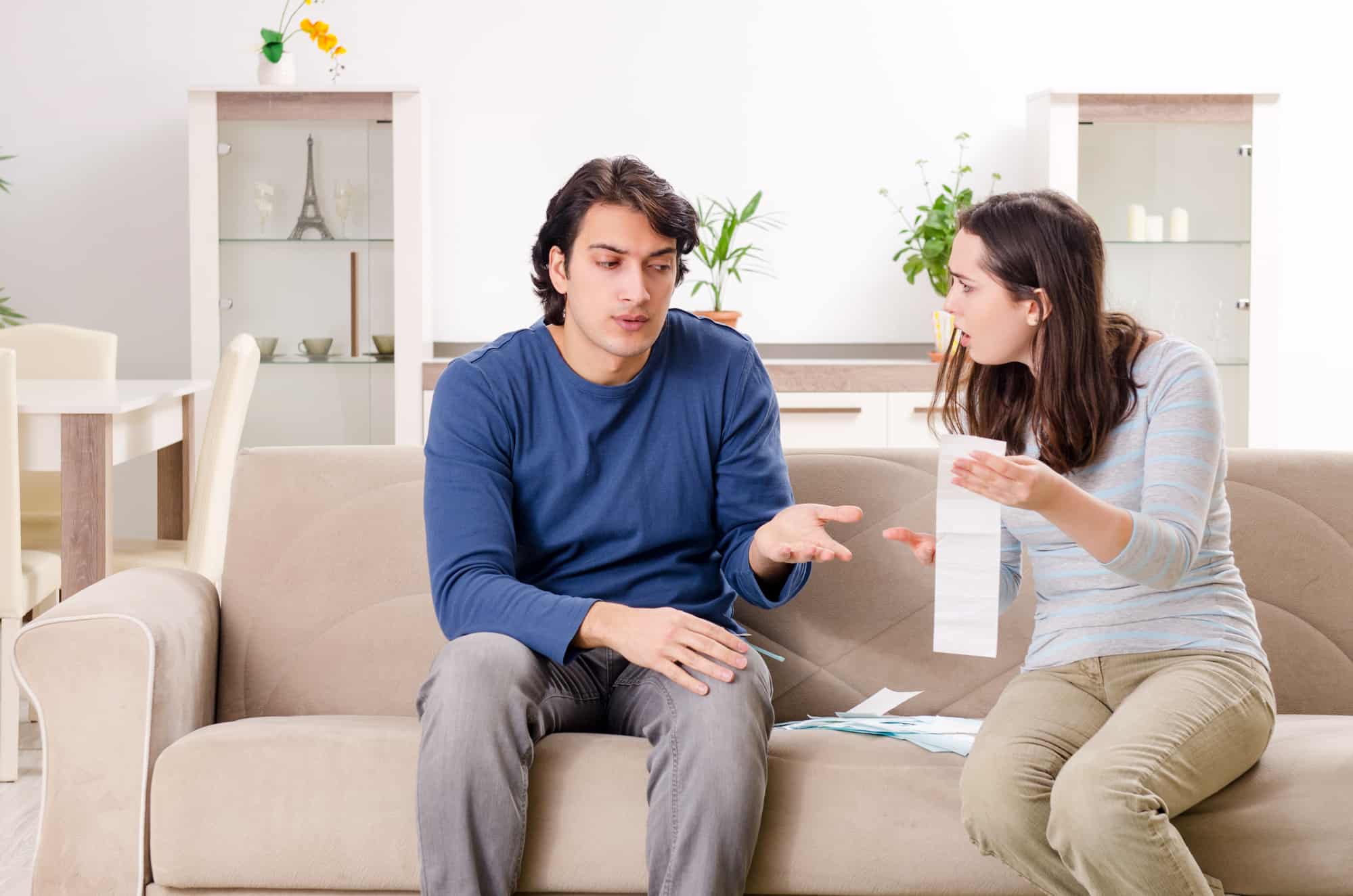 Financial abuse happens rather commonly in relationships but isn’t as recognized as other forms of abuse. There are many things that a man can do to his spouse just to gain the upper advantage and inevitably control the relationship. Being the woman in such a situation, it takes a toll on your mental health and well-being.

You work hard to earn money, and you still don’t see the reward for all your hard work. Trying to analyze the situation for viable answers can be quite hard, which is why you’ve resorted to an online search.

Nevertheless, if you suspect any signs of financial abuse, then there may be a way of overcoming the situation and getting your happiness back. Grab a snack, sit back, and let’s get right to it.

6 Ways to Know You Are Being Used Financially

1. They control your bank accounts

In marriages, it’s a common thing for a partner to take the responsibility of most of the household finances. They may help to resolve any issues concerning money and even have large expenses run through them before they are finalized.

This could be because they’re more prudent towards making financial decisions than their partner, or perhaps they just want to ensure the entire household is functioning as it should.

However, in most cases, there’s a fine line between healthily controlling the money in the household, and being controlling. If you notice that your spouse tries to have access to your bank account details, and persuades you to give him other personal financial information, then it’s a sign of financial abuse.

If he suggests opening joint bank accounts, and in some cases, restricts you from using your credit cards or even withdrawing money, then that’s a big red flag. Since financial abuse oftentimes leads to other forms of abuse, little signs shouldn’t be ignored.

2. They get angry when you spend

Even though he’s cautious, it’s important to know when things are building up to financial abuse. If you observe that your husband gets overly angry with how you spend money, it should call your attention. You have to figure out whether these are really exorbitant expenses, or whether your husband is simply trying to control how you spend money.

You also have to monitor his actions after that, because a financially abusive man may get verbally abusive, just to maintain the dominance he’s either trying to build or has already built up. If he clearly dictates that you have a spending problem, even when you know you don’t, then that’s another sign of financial abuse.

It’s best to keep him in the dark when it comes to your personal financial situation, don’t let him know how much you have and consider opening a separate account he knows nothing about. This way, you’re protecting yourself in case he ever tries to pull a fast one on you.

3. Your earnings go directly to him

If your husband is constantly trying to persuade you to transfer bulk amounts of money to his account for safekeeping, he might just have a different agenda on his mind. This is one of the common signs of financial abuse, one person shouldn’t have sole authority over the other, because financial independence is quite important.

Most men would engage in this form of financial abuse because they love being depended on. It could also be as a result of certain fears, such as you getting more money and having the liberty to leave the relationship if things go south. He might also be doing this simply because he’s a controlling person.

Whatever the case may be, strictly depending on your partner, especially for the resources you’ve worked for is wrong. It could lead to a situation where he starts allocating money to you, or even physically abusing you. This means that speaking up before the situation gets too serious, and finding ways to get control of your finances once more, is the only prudent move.

4. They influence your career choices

Financial abuse can be spotted early in a marriage, and sometimes, even before that. Most men might feel intimidated by their wife’s drive for success and might seek ways to cut her goals short before they manifest.

One easy way is by convincing her that her career choice isn’t worth it, and might possibly affect the relationship. In reality, because dependency gives men a sense of importance, when this isn’t achieved, they get agitated and sometimes resort to abuse.

If he’s overly opinionated about your future, and how it should be panned out, it’s definitely a sign of financial abuse. More so, if you feel like his suggestions about your new career are biased, then you should, in fact, be on the alert.

Before he uses this as a measure to abuse you, ensure that he doesn’t poison you with convincing stories about how your career choice is wrong if truly there’s nothing to be worried about. In other cases where the financial abuse has already started, find ways to get back on track, and avoid strictly depending on your spouse for everything.

Some men might convince you to be open about finances in the marriage but hide how they spend money because they want to have the advantage. Though the idea of spending one’s money isn’t wrong; the wrong thing is emphasizing healthy financial decision making, which your wife complies with, but keeping secrets about your exorbitant expenses.

Having an extra credit card just to make expenses, especially when a partner is restricted, is manipulative, and in plain terms, financial abuse. No one should deliberately be deprived of something the other is benefiting from.

If your spouse feels good about spending huge sums of money on specific things he likes, then you should also get that privilege without feeling like a bad person. If you start to notice receipts of unknown expenses in your home or discover an extra savings account that belongs to your partner, it’s best to speak up about it before it gets out of hand.

Don’t be forceful or accuse him of anything, if he tells you there’s nothing wrong with the act, simply let him know that you’d also want to spend on things you like.

6. They outrightly use you for money

One easy way to spot when your partner is abusing you is if he uses you to satisfy his financial wants and desires. In many cases, there are situations where the wife earns more, and the husband isn’t doing as well. He may even be going through a financial crisis and isn’t able to cater to his own needs, which makes him dependent on his wife.

It’s a natural thing to support your spouse through a crisis, but it becomes a problem when your spouse doesn’t want to come out of a crisis and sees you as an avenue to keep on spending without working. In such a scenario, he wouldn’t consider the time and effort you put into working to earn money, and acts like it’s your duty to cater to his needs in such a situation.

You can easily detect when the situation is getting worse when you can no longer talk to your spouse about the problem. More so, the subject of him trying to be stable with his own finances is most times evaded by him.

When the workload is only on you, without support from the other party, then it becomes a subject of concern. You should consider putting certain things on hold to force your spouse to become more responsible. More so, consider asking a counselor for tailored advice to your distinctive situation.

Should a wife help her husband financially?

A wife should help her husband especially during trying times, but it’s always prudent to ensure it doesn’t lead to financial abuse. If you notice that your spouse is using you for his financial wants, and considers your act of generosity as a necessity, you should consider implementing tactics to prevent this manipulative act from continuing.

How do you protect yourself from a financially irresponsible spouse?

If you notice that your spouse is irresponsible, you should consider being discreet about your earnings, and find a method to prevent your spouse from gaining access to all your income. Nevertheless, this doesn’t mean you should entirely cut your spouse off from what you earn.

How should married couples handle finances?

Married couples should handle their finances in a way that acknowledges the needs of the two parties involved. More so, there should be an acceptable partnership, which the two can agree on, without one person imposing certain rules on the other.

Is my husband a financial bully?

You can know when your partner is a financial bully, by how he treats you on the subject of finances. If he deprives you of his own income or channels yours to be under his control, then it’s a clear sign. Even so, when he’s using your money for his personal financial wants without being willing to contribute, then he’s a financial bully.

How should a husband treat his wife?

Every husband should treat his wife, in the same manner, he would like to be treated, with love and respect. A husband should also learn to be empathetic towards his wife, and consider her personal needs and emotions in every decision made.

Were you enlightened by this article? If you find yourself being financially abused by your spouse, ensure to take steps to stop the manipulative act by seeing a counselor and asking for detailed advice. Share this article with friends, and leave a comment below.