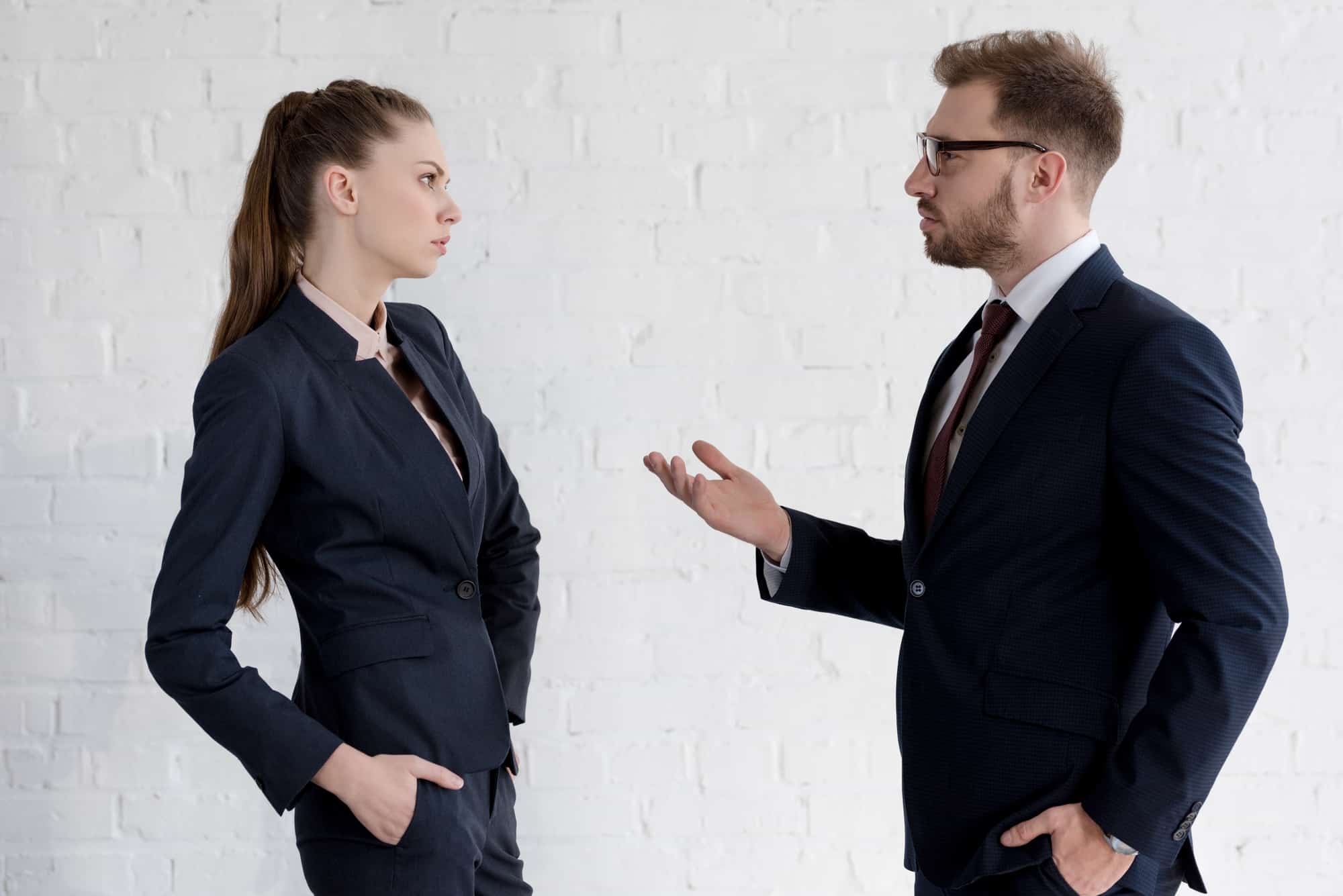 Thinking you are always right is a bit narcissistic because you assume you have the correct answer. Controlling people are often like this and actually feel anxious when challenged by another viewpoint. We’ll take a close look at how to best handle a relationship like this.

I believe many people want to be right because it gives them more confidence in who they are and their abilities to communicate effectively.

I would not say my husband thinks he is always right; rather, I’d say I carry that role more often than he does. However, it’s not because I am insecure or “have to be right;” I just happen to be right the majority of the time! Does this make me a better person? Absolutely not!! In fact, I would say he is a stronger, more likable individual, so he does have one leg up over me there.

I do not claim to always be right, either. There are just certain topics I know more about, but when I could be wrong, I use qualifiers when I speak, but we’ll get more into that in this post, so stay tuned!

Top Ways to React to a Know-It-All

There’s nothing wrong with showing your viewpoint when it comes to differing opinions. However, it’s a good idea to think about your side before bringing it up. Are you correct in your viewpoint, or do you just have a guess? Make a decision on this before committing and standing firm against your man.

No one wants to be proven wrong, and that’s a normal way of behaving around other people. We want to be liked and loved for the things we know best, our areas of expertise, and what we think. Just make sure you aren’t arguing for argument’s sake. Voice your contrasting viewpoint on the important things in life, not the petty ones.

2. Try to understand his point of view

Show empathy when it comes to your spouse; your compassion and understanding should be evident in your marriage if you want it to be successful. Look at things from his point of view. This is a great way to show love and patience.

Try listening more than you speak. You’d be surprised at what you can learn when you take the time to hear what other people have to say, rather than just thinking about what you’ll say next. To best do this, repeat back what he said to you, showing that you listened and understood his side of things. This can lead to success in a relationship.

3. Be willing to admit when you are wrong

Be a positive person when in a relationship. Instead of searching for ways that you were correct in your stance, find positive ways that you can support his side of things. If you were wrong, confess that! Simply say something like, “I was mistaken about this and that. You were actually correct, and I was not. I should have supported you.”

This statement doesn’t sound like you are less of a person for not having the correct answer. However, if you held your ground on the subject, you may want to apologize for not supporting him in the way that you could have. This does not mean failure!!

Sometimes, in a relationship, you just have to let things go. Agree to disagree if you’ve already explained your side of things; the two of you do not have to have the same opinion on every subject under the sun. In fact, many relationships thrive on a bit of conflict or differing opinions on different subjects. Be compassionate with your man.

5. Don’t be an argumentative person

I once had a friend who would have made a great boyfriend, if not for his need to argue. We argued over the pronunciation of the word bruschetta once, and the experience truly showed me that I could not be happy with a person like that. I thought I knew the best answer since I worked in an Italian restaurant and everyone there said it like that.

He decided to prove me wrong and took it upon himself to write a 10-page email/essay, proving me wrong. I don’t care how that word is ACTUALLY pronounced! I really do not, and I did not! That, to me, is something minor that wasn’t worth the trouble of arguing over. Consequently, we never dated; we just stayed friends. Don’t be a person like that!

Even if he was correct and even if you think you are, is it really worth all that? Is the topic important enough to you to argue endlessly about it? Pick your battles! You never know how another person is going to be affected by the things you say or the ways that you approach the answers. Did he really need to write a 10-page essay on the subject?

6. If you must, gently prove you are right

So, you’ve decided that this issue is crucial to the survival of your relationship, your family, or the world? Do you think this topic is THAT important? If you feel this way or just want to stand up for yourself for once, go for it, but have good evidence that your opinion is the best of the two of you.

Find the research online or at the library that proves you are correct. Bring the subject up in a kind and compassionate way. You don’t have to say, “Ha! I knew you were wrong!” That isn’t going to make anyone feel better. Instead, go for something like, “Do you remember what we were talking about? I came across this evidence that may help.”

7. Understand his motivation for always needing to be correct

As mentioned in the introduction, you may not know the insecurities he is going through behind the scenes. Certainly, give him the benefit of the doubt if you suspect there’s more behind his “rightness” than minor insecurities or an overly boastful personality. He may have a psychiatric issue or issue from his past that you don’t even know about!

If you love him and want your relationship to thrive, you owe it to him to dig deeper to discover if there are any hidden motivations behind his need to be perfect all the time. Don’t be accusatory or show negativity, sarcasm, or ridicule for him voicing his opinion, especially if you think more is going on underneath the surface.

8. Shed light on the topic in an agreeable way

You can share what you think. If you have more information on the topic than he knows about, chime in and talk about it openly. Neither party has to be wrong this way.

Another way to look at this is by asking yourself the question, “Is he always correct?” Yes, this is an annoying thing to be around all the time, but it also means you can relinquish control over some aspects of your relationship and instead rely on his strong suits to help you in different ways.

He may be able to give you advice on the areas where he knows better than you! Think about the benefits of this! For example, if he’s better at directions and navigation, this is something you could just let go of control over. Rather than arguing in the car, let him take the reins and shine in the areas that he has more knowledge of.

Your spouse needs someone who is supportive and accepting, regardless of whether you agree or don’t agree on a certain topic. Relationships and marriages are all about give and take. Make sure you are ACTIVELY listening when your partner speaks. Keep an open mind when communicating, especially on topics he’s very passionate about.

You don’t have to “pop his balloon,” even if you disagree with something he’s said. Just because you have a different opinion doesn’t mean you have to voice it. Try to listen as if you are first learning of this subject, pretending everything he says is brand new and interesting.

What to do when your husband thinks he is always right?

I think one of the most successful ways to have a successful marriage is to pick your battles wisely. If he insists something is true, while you disagree, you need to decide if it’s worth getting into an argument over. Is it important enough to get in a fight over?

What is it called when a person thinks they are always right?

Some people who think they are always right are known as narcissists or know-it-alls. Before calling your spouse one of these names, think long and hard about whether this is a subject you should approach, and tread carefully. For a narcissist, insults just fuel their existing insecurities, making things worse.

Why does my partner always have to be right?

Your partner may feel like his point of view is more important than yours. There may be some self-doubt or self-esteem issues going on, as well. Give him a little bit of a break, because there could be something lying underneath the circumstances that you don’t know about.

How do you make your husband realize that he is wrong?

Again, tread carefully, and pick your battles. If you think it’s an important enough issue to argue over, demonstrate the proof you have that shows you are, indeed, correct. Make sure it’s irrefutable evidence; you don’t want to be in a three-month argument over something subjective.

What does a wife need in a marriage?

Are you in a relationship where one person is always in the know? Do you have a clever solution to this problem you could share?

I would love to have you share your opinion in the comments, and don’t forget to please pass this article along to someone else!