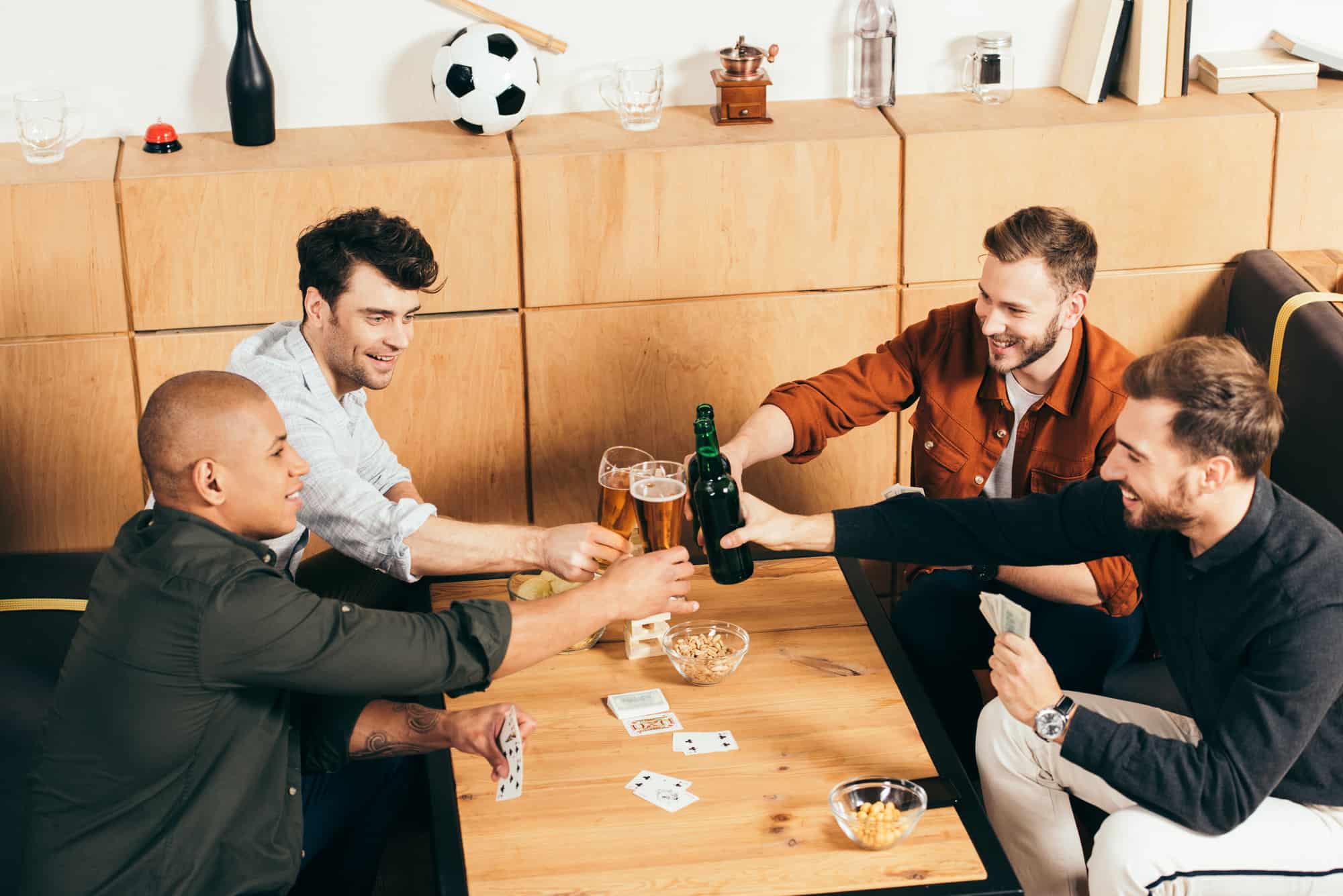 The dating period is an interesting time that doubles as a trial period. It is the time to enjoy being in love but also a time to observe whether your partner is someone you want to be with indefinitely.

Does he do anything to surprise you? Does he express his feelings about you openly? Is he someone that makes you feel special?

Have you answered those?

Good, because any relationship that makes any of the parties feel insecure, ignored, or little isn’t healthy. Both parties have to put in the effort to show that they love, cherish, and respect each other. Plus, if you have to say “my boyfriend never takes me out but goes out with his friends.” That means this person is hurting your feelings in a way.

Of course, don’t jump to the conclusion that he doesn’t love you, there could be more than two reasons why he hangs out with his guys and not you, so let’s explore them.

1. He has lots of friends

If your boyfriend has lots of friends and is an extrovert, he may hang out with his friends a lot. In such a case,  he might not be able to invite you to every hangout. You should sit him down and tell him you don’t like that he excludes you completely from these gatherings though.

If your partner cannot give you a genuine reason why he doesn’t take you out, yet claims he is always hanging out with others, he is probably lying and hiding something from you.

If this guy loves playing basketball on the weekends, while you love going to the cinema, he might not often include you in his soccer-playing trips. You can let him know you’d like to attend sometimes.

4. He is double dating

Well, one of the reasons could be that he’s actually seeing someone else at the same time. Rather than break the relationship off with you or the other person, he’ll make an excuse such as “I’m watching a game with the friends tonight.’. This way, you won’t find out the truth.

5. There is little or no communication

Communication has always been a vital factor for any healthy relationship, it’s something that can’t be neglected. Your partner may feel like there’s no point telling you stuff because both of you probably don’t communicate effectively.

6. You don’t show him the real you

7. He doesn’t value your opinion

A guy who doesn’t cherish your opinion won’t want you to go out with him when he’s chilling with his crew. It’s his method of saving face without regarding your feelings.

8. He is a narcissist

The thing is, a narcissist doesn’t feel like he needs to say anything to excuse his actions. If he does something, then it’s right. He’s the type of person that would purposely leave you out because he feels it’s the right thing to do.

9. He is frightened to be committed

A relationship is a two-way street; both people have to feel like the relationship is actually leading somewhere. A lot of people think every relationship pushes them one step further to the altar. That makes them step back a little, just so the other person doesn’t get any ideas.

If you’re still asking yourself why “My boyfriend never takes me out but goes out with his friends,” girl, this person might just be ashamed of the relationship. He may not want people to know that you guys are dating.

A serial dater won’t take your relationship with him seriously and he won’t want to risk you thinking otherwise. So, he completely avoids taking you out so he can easily move on to someone else.

A lot of people make decisions without considering the other party, someone like this just does what he likes without thinking about how that could hurt you.

13. You don’t know each other well enough

If your relationship is still in the early stages, your partner might be hesitant to let you get acquainted with his buddies just yet. That might not be a bad thing.

14. He’s looking for a way to break up with you

When someone wants to break up with their partner, they try different tricks. He might be using this exclusion as a means of distancing himself from you to put a strain on the relationship.

15. He wants complete control of the relationship

A guy who is crazy about control will not allow you to know much about him until he is ready to do so. This isn’t such a good sign for your relationship.

16. His interest in you isn’t solid

If your partner isn’t sure about how important you are to him, he may feel like there’s no point hanging out with you so much.

17. You are a short term investment

As a short-term investment, your time with the guy is limited and there’s no point meeting his friends or family. You should stay far away from such a man because he has nothing good to offer you.

18. You’re not his priority

Here’s the thing, you deserve to be prioritized and if your partner isn’t including you in serious parts of his life, then you’re merely a convenience rather than a priority to him.

19. He wants to give you a false sense of security

If he hangs out with you once in a while but hangs out with his buddies a lot more, he might just be trying to tie you down while sparing personal dates. Don’t fall for the false sense of security.

20. He doesn’t want you to know something

If your partner doesn’t take you out often, you’re most likely missing out on something he’s doing; a relationship with someone else? A secret life? A bad habit? Who knows?

21. He doesn’t want to put in the effort it requires to bond with you

A guy who puts in the effort for a serious relationship should take you out to meet people and have fun. If he doesn’t it means he doesn’t think you’re worth the effort.

22. He wants a non-exclusive relationship

If the relationship isn’t that official, but you guys are giving each other ‘special benefits,’ of course, he may not see the need to take you out like he would in an actual, official relationship.

This can be the worse part yet because you’re committing an error without your own knowledge. He doesn’t want anyone to know about the relationship so it won’t blow his cover.

Again if you’re asking why “My boyfriend never takes me out but goes out with his friends,” Well, do you guys over the littlest things? He might feel like every time you go out, both of you come back fighting over something irrelevant. So he hangs out with others instead.

Still on the topic of fights and quarrels, is this something he does after you guys argue? Maybe that’s his idea of ‘punishing’ you.

26. They mean more to him than you do to him

If your boyfriend places his friends above you, chances are that he will spend more time with them rather than with you.

Some people don’t understand that some of their actions are not good and until you tell them. Maybe it’s been a while since he’s been in a relationship, and is just used to hanging out with his guys.

28. He has always gotten away with everything he does

If your boyfriend has always received everything he desires on a platter of gold, he will think he can do whatever he likes.

29. He gave up because of your excuses

By now, if you’re still murmuring “My boyfriend never takes me out but goes out with his friends,”  Well, maybe he had asked before and you said no, now his ego might not allow him to ask you again.

If you are a closed-off person who doesn’t share much with him, he will go to his friends to complain and try to understand you.

31. He’s just used to hanging out with them

Before you came into the picture, maybe your boyfriend was and is still really close to them. It’s almost too hard for him to go a day without hanging out with them.

What does it mean when your boyfriend doesn't take you out?

It could mean many things; he may be shady or is just used to hanging out with his guys.

Why do I get jealous when my boyfriend goes out with his friends?

It is normal to get jealous when your boyfriend hangs out with his friends rather than with you. However, if he balances the time out, there should be no reason to be jealous.

Why does it bother me when my boyfriend goes out with his friends?

If your boyfriend doesn’t take out time for you and him to hang out but spends most of his time with his friends, you may be bothered that he is not serious about the relationship.

Why does my boyfriend not want me around his friends?

It could be nothing and it could be something. If he is hiding something from you, maybe a bad habit, he wouldn’t want you around at that time.

What are red flags in a relationship?

Red flags include things that give you hints that you may want to revisit your decision to stay with your partner. The red flag could be that your boyfriend doesn’t take you out, lacks interest in your well-being, or doesn’t share your values.

Being left out is not the best feeling, but hopefully, your boyfriend explains the actual reason when you guys have that conversation. I hope you enjoyed reading through this, kindly leave a comment below and share the article with someone else.

You May Also Like
14 Qualities Of A Good Husband
No Comments
How To Convince Your Husband To Have A Baby (21 Ways To win Him Over)
No Comments
Does He Love Me? (10 Sure Ways To Find Out)
1 Comment