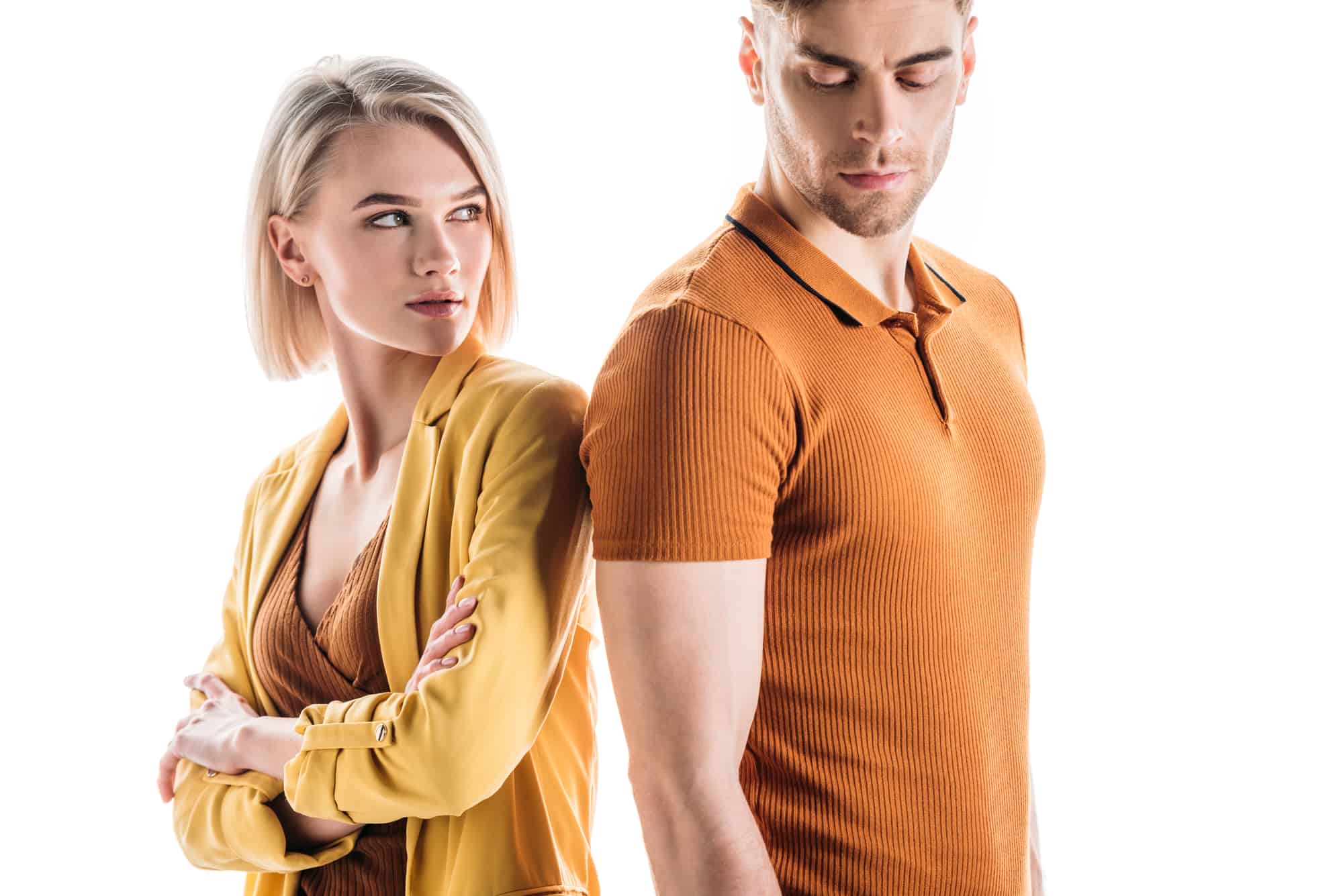 My Boyfriend Is A Misogynist (21 Worrying Signs)

According to the Cambridge English Dictionary, misogyny is the feeling of hating women or the belief that men are much better than women. It’s 2020 and it would be nice to think that misogyny doesn’t exist anymore, but the sad truth is that it still does, and the more terrifying truth is that you could be going out with someone that has these beliefs.

If you’re concerned that your boyfriend could be a misogynist, it will most likely be playing on your mind a lot and you will be finding it really tough. It’s incredibly confusing, but you need to face this issue head-on, or you could find yourself in an even worse position in the future.

To help you get to the bottom of it and figure out whether your partner really is a misogynist or not, we’re going to share 21 signs that will be showing in your relationship if he is. So, let’s dive right in and take a look.

Is He A Misogynist?

1. He always addresses men before women

Although you might not usually take notice of this one, it’s one of the most telling signs that your man is a misogynist. Men who hate women, whether it’s subconscious or it’s acknowledged, will always address men before they address women. He will always go to shake a man’s hand first and quite often will only speak to a man, completely ignoring the woman by his side.

2. He puts down women’s bodies

Men who hate women typically have a sexualized way of viewing them, so if your man is constantly putting women’s bodies down, it’s a sign he hates women. Firstly, it’s never right to judge someone else’s figure, regardless of gender, but the reason it’s a sign that he’s a misogynist is because he’s not looking at what a woman does, says, or has accomplished, instead, he’s judging them for their bodies.

3. He expects you to do the household chores

Misogynists believe that women should be the ones to keep the household clean, keep the kids busy, and run the entirety of the domestic family life. So, if your partner has never hoovered in his life, expects you to clean, or outright asks you to tidy up while he goes and has fun, it’s not a good sign.

4. He speaks before you, and for you when you’re at a restaurant

Misogynists not only hate women, but they believe that men are way more important. Therefore, if you notice that your partner speaks first when you’re ordering at a restaurant and speaks for you to the waiter, it’s a sign he thinks you’re not only not as important as he is, but also that you’re weak and need to be spoken for.

5. He can never congratulate you

Whether you’ve just got a promotion at work or you’ve achieved something in your personal life, a misogynist will never congratulate you because they don’t believe that you’ve done anything worthy. Misogynistic guys hate it when a woman achieves something, especially things that they haven’t, so they always find a way to disregard it or belittle it.

6. He never cooks for you, or anyone

Of course, not everyone is an amazing chef, but if your guy has never cooked for you or has never really stepped foot into the kitchen because he believes it’s a “woman’s job” this is a sure sign he’s misogynistic. Every part of domestic life should be shared between both partners.

If your guy surrounds himself with people that are judgemental towards women, show hatred, and believe men are better than women, it’s probably a sign he’s misogynistic too, otherwise, he would realize how deluded these people are and not hang around with them.

8. He shares jokes about being abusive towards women

Abuse towards women is definitely not something that should be joked about, so if your guy is sharing misogynistic jokes, it’s because he thinks it’s harmless and he believes in what the joke is about - this is truly disgusting.

9. He gets angry if someone compliments you

As mentioned above, misogynists can’t cope when a woman achieves things and is successful, but they especially can’t stand it when someone compliments a woman for being successful. If you’ve noticed that whenever someone compliments you for achieving something great your partner gets angry, it’s most likely because he's misogynistic.

Has your partner ever told you that he wishes you to stay at home and take care of kids in the future? Or if you’ve already got kids, does the thought of you going back to work make him angry?

If so, your partner probably expects you to be a stay at home mom and housewife because he’s a misogynist. No one should ever expect you to put your career and personal life on pause, you should only do so if it’s a personal choice.

11. He thinks sexism is a joke

Fighting for women’s rights is no joke, and sexism has not been eradicated. However, someone that’s misogynistic will always think that sexism is a  stupid and ridiculous concept that doesn’t exist. So, if you’ve ever tried to speak to your partner about women’s rights or sexism and you’ve been ridiculed or ignored, it’s a strong sign they are a misogynist.

12. He believes feminists are man-haters

If your guy goes on about how feminists are ruining society, how they all hate men, or how they’re stupid, it’s a definite sign that he hates women. Most men are actually feminists too, as they realize how important it is to fight for women’s rights, so if your partner doesn’t get this, he doesn’t deserve to be in a relationship with you or anyone.

Misogynists believe that women are inferior and that one of the most important things women do is pleasure men. Therefore, sex with a misogynist is incredibly one-sided as they always want to be pleasured but never give pleasure. In very extreme cases, misogynists won’t care about consent and will sexually assault women.

14. He doesn’t know how to pleasure you

Due to the fact misogynists believe that it’s a man’s world and that women are inferior, they don’t put effort into providing pleasure for the women they have sex with. In fact, because it’s never crossed their minds to pleasure a woman, they don’t know how to. So, if your partner doesn’t know how to pleasure you or never focuses on bringing you pleasure, it could be because he’s misogynistic.

A misogynist won’t see a woman as her own person, instead, he will think that women are like objects and that he owns the women he is in a relationship with. Therefore, when another guy threatens to take the woman he has away from him, he will get extremely jealous, even when no such threat has been made.

Misogynistic people want women to provide them with everything so that they don’t have to move a finger. So, if your guy is extremely demanding and makes you do everything for him, it’s a sign that he thinks women are slavelike.

17. All plans are according to his schedule

If your partner is always making plans on his schedule and not taking your personal life into account, it could be because he thinks you’re inferior. Misogynistic guys don’t take into account the fact women have personal lives of their own and therefore always make plans whenever it suits them.

18. He puts your career down

If your guy is constantly putting your career down or being critical of your academic skills, it could be because he’s misogynistic. Misogynists believe that women shouldn't work as they don’t have the talent to do the same quality work as a man, and should instead stay home and dedicate themselves to looking after the family.

We all have idols and people that we look up to, and typically most people don’t care about gender when they’re looking for inspiration. However, if your partner only has male idols and doesn’t respect the work of any women, he’s probably misogynistic. In addition, if he doesn’t respect his mom, it’s a bad sign, unless she was actually a bad parent to him.

20. He always blames you

Misogynists believe that men are superior, and therefore any problems that occur in life only occur because a woman has created them. Guys like these blame women for everything, so if you’re always getting the blame for issues that aren’t your fault, it’s a red flag.

21. He is violent or abusive towards you

Of course, people can be violent and abusive without being misogynistic, but the majority of guys that abuse women are misogynists because they believe women deserve it and they have no concern for a woman’s life.

What Should You Do If He Is A Misogynist?

Hopefully, this article will have helped you figure out whether or not your partner is a misogynist. If you have come to an understanding that they are, this can be really distressing, but it’s essential to know so that you can move on and be with someone that actually values you. Always remember, you’re important and you deserve happiness, respect, and support.

Did you like this article and find it useful? Let us know in the comments and feel free to share.