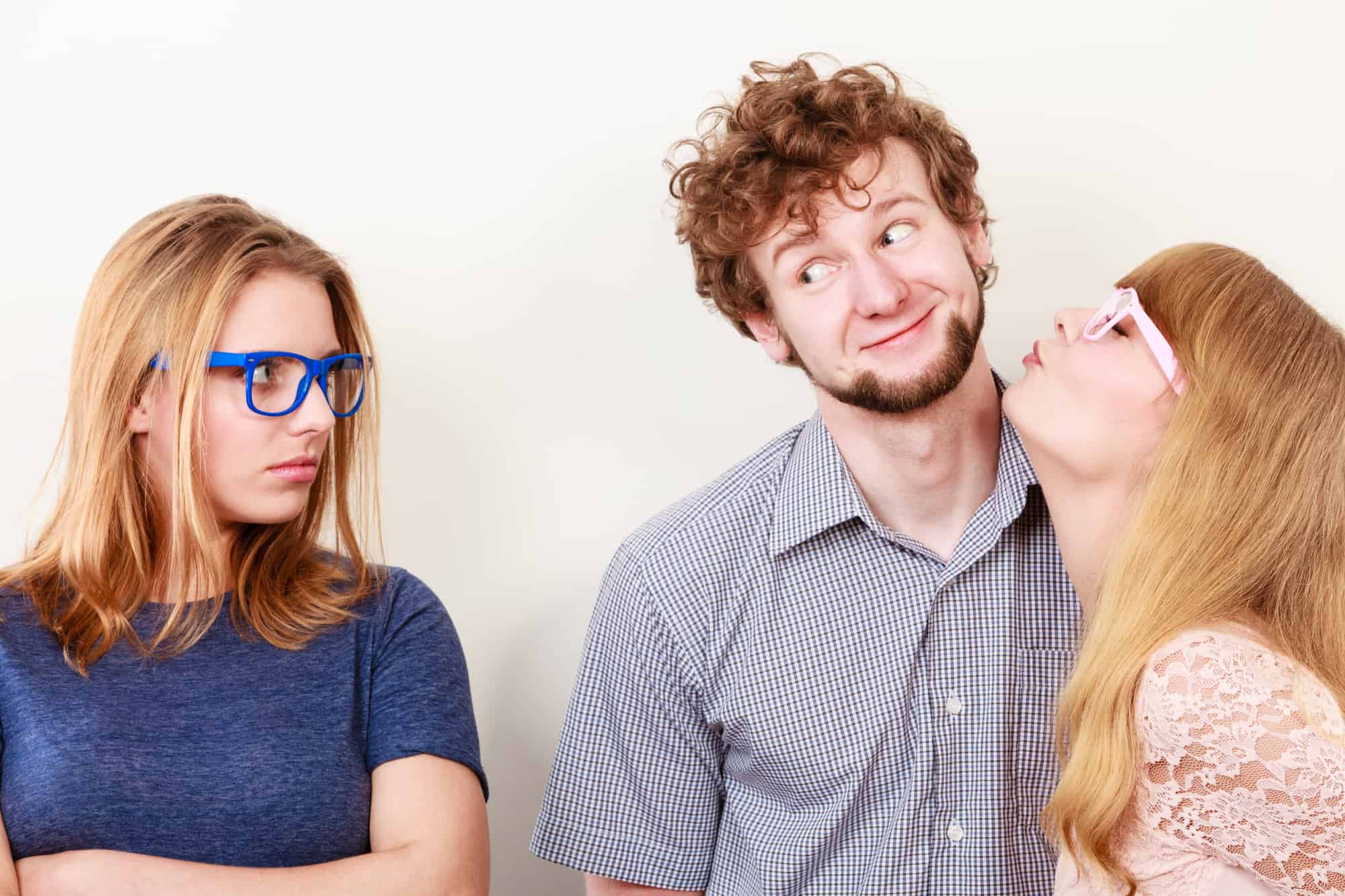 Is He Trying To Make Me Jealous? (31 Clear Signs)

Are you wondering if a man is disinterested in you, or trying to make you jealous?

When a guy acts distant, it could be either one of these things.

These silly games are frustrating for both genders, yet we both continue to play them.

Thankfully, I have created this comprehensive guide to help you figure out a man’s intentions when he goes cold on you.

Does he not care, or is he making you jealous? You’re about to find out.

Before we start, I’d like to recommend this online communications tracker tool. If you know a few of this guy’s basic details, you can use this tool to connect with his phone and find out if he’s contacting other women.

It’s completely discreet, and it’ll reveal a ton of information about who he is contacting, how often and what apps he’s using. As such, this tool provides the perfect way to find out if he’s still interested in you, or not.

However, it might be possible to find this out by watching his behavior. Read the guide below for ideas on how to do this.

Is He Trying To Make Me Jealous?

1. He flirts with other girls

A player will do this behind your back. If he wants to make you jealous, he’ll do it within earshot so you know that he’s doing it.

2. He talks about other girls

If he’s not talking to other girls at the time, he may just talk about them. For example, he might say that he was up all night talking to a friend of his that is a girl.

3. He compliments other women in front of or to you

You’re walking down the street and he mentions the way her butt is. He talks about how hot blondes are. He flat out tells the waitress that she’s gorgeous.

4. Showing off other girls

He takes pictures of him partying with other women and then posts them to Facebook. A guy that is putting forth the extra effort in making you jealous will also send you a friend request as a way to make sure that you see those pictures.

5. His schedule is packed

All of a sudden, he’s doesn’t have time for you. He can’t accept your phone calls because he was busy. Plans get canceled.

6. He talks about a relationship with someone else

7. He’ll talk up other women

He blatantly flirts with other women in front of you. He even flashes them that ear to ear grin that you love.

8. Boasting about attention from other women

If you don’t notice him flirting, he’s sure to tell you about it. When he’s trying to make you jealous, he makes sure you know that other women want a relationship with him.

If he’s not out to make you jealous of other women, he still wants you jealous. Whether it’s making more money or having higher education.

10. Acting like they have so many women after them

Mr. Popular has so many women vying for his attention that they just have to tell you. He’s letting you know that he could be dating any of them, making you simultaneously jealous and special.

11. Laughing loudly at her jokes while ignoring yours

She tells the corniest joke you’ve ever heard and he bursts into a loud fit of laughter. Yours is actually funny, and he’s silent. It’s not that he doesn’t think you’re funny.

12. Sitting closer to another girl

Us girls notice everything, and if your crush is showing signs of attraction with another girl all of a sudden you are bound to notice it. He’s trying to get your attention with this move.

This bold move is usually reserved for when more subtle jealousy tactics don’t work. If you ignore him when he’s obviously making you jealous, he might take things up a notch.

14. Making plans with another girl

Not only does he make plans with her, but he will also make sure you know about them. Those plans might not even be real, but you won’t know that.

15. Putting distance between the two of you

It can be heartbreaking, but he’s trying to get that green-eyed monster to rear its ugly head. He might just slow down with the phone calls and texts instead of stopping altogether.

16. Not inviting you out with the group

You guys have a group of friends, but he suddenly makes plans with them and you are not included. He wants to exclude you so that you feel jealous of him hanging out with other people.

17. Staring at other women

If he’s blatantly checking out other girls in front of you, you’re bound to feel some type of way. He wants you to. If he tries to hide it, it was an accident.

He may have been to Italy, skydiving, etc. Whatever his achievements are, he makes sure they are known. When you feel envious of his achievements, he manages to both impress you and get your attention.

Even if he’s trying to make you want to rip another girl’s head off, he won’t want you to feel like leaving. So you get him hot one minute and cold the next. It’s all part of the game.

20. He watches your reaction

Men that are trying this intentionally want to make sure that their efforts are working. He studies how you react when he’s trying his moves with other girls.

21. He’s not serious about other women

No matter what he says, he doesn’t want you to think he’s serious with them. He blows off the possibility of dating or a relationship with other women.

22. If you ignore his efforts, he pushes harder

The common reaction in women when they know a guy wants to make them envious is to ignore it. If you do, he’ll up his efforts and become more obvious or get irritated.

23. Calling other girls in front of you

When he does up those efforts, he’ll make sure you know if he’s talking to one other girl by calling her while you’re sitting right next to him.

24. Texting other girls in front of you

If he wants to see your reaction, he might start texting other girls in front of you. He wants to see if you act a certain way or may ask questions about who he’s texting.

25. Showing you texts from other girls

If that doesn’t work, he may show you texts from other girls. He only shows you that one message thread with a female complimenting him, though.

26. Telling you about other women hitting on him

Even if there’s no evidence, he makes sure to tell you about the cashier that was hitting on him or all the girls that think he’s a dream come true.

27. Talking about past relationships

Past women are brought into the conversation because he wants to see your reaction. He could be seeing if you’re envious, or he might be considering a relationship and testing you to see if you can handle him having conversations with his child’s mother.

28. Bragging about things other women are great at

She’s a great dancer. This other one is amazing in bed. A random girl is suddenly the best artist he’s ever seen even though you’re also an artist. If you feel a certain way, he’s succeeded.

29. Saying he’s dating someone else

If you’re going to the movies, he tells you he’s dating someone else too. He may be having an honest streak, or it could be he wants an idea of how you feel.

30. Having friends tell you he likes someone else

Those mutual friends are the perfect way to relay a message. They might tell you he likes someone else, is interested in her, etc. It’s all to tell how you feel.

31. Being the life of the party to get your attention

If he wants to make you jealous, he wants your attention. Another great way to do that is to be the life of the party. You won’t be able to help but give him a few glances.

Why Is He Trying To Make Me Jealous?

Guys attempt this for quite a few reasons. These are the most popular ones:

How do I know if he's trying to make me jealous?

Do you feel jealous? Has he got you second-guessing his relationships with other women all while carefully studying how you react? If he’s paying more attention to other women and you answered yes to either of those, he’s trying to make you jealous.

What does it mean when a guy tries to make you jealous?

It means that he likes you or that he wants more attention. When his attention needs are not being met, he’ll try other ways to capture your attention without coming right out and saying it. It could also determine whether he wants things to be more serious between the two of you.

Does he try to make me jealous?

If he pays attention to other women or flaunts them in your face, he more than likely does try. Not only will he do this, but he’ll also keep you close while he does it. This is because he’s not serious about the other women, he is simply using them to determine your feelings for him.

What to do if he is trying to make you jealous?

Don’t let it bother you, and don’t feed into it. That will only encourage it. Instead, have a talk with him about his actions. Also, make sure that you’re showing him plenty of attention in other ways to help curb his efforts. He won’t bother if he’s already getting what he wants.

How do you tell if someone is making you jealous?

He’ll act differently with both you and other women. Whereas a player will hide girls from you, this one will make sure you are aware of their existence. After that, he will watch you in order to see how you react. He also won’t be mad when you feel jealous, because that’s what he wanted.

There is nothing more frustrating than when a guy goes out of his way to make you feel jealous. You are well aware of what he’s doing, but it still makes your blood boil. Have you ever had to deal with your crush making you feel jealous intentionally? How did you deal with it?

You May Also Like
Is He The One? (11+ Assuring Signs)
No Comments
Falling For Someone Who Is Moving Away (5 Ways To Handle It)
No Comments
How To Pursue A Man In 10 Effective Steps
No Comments