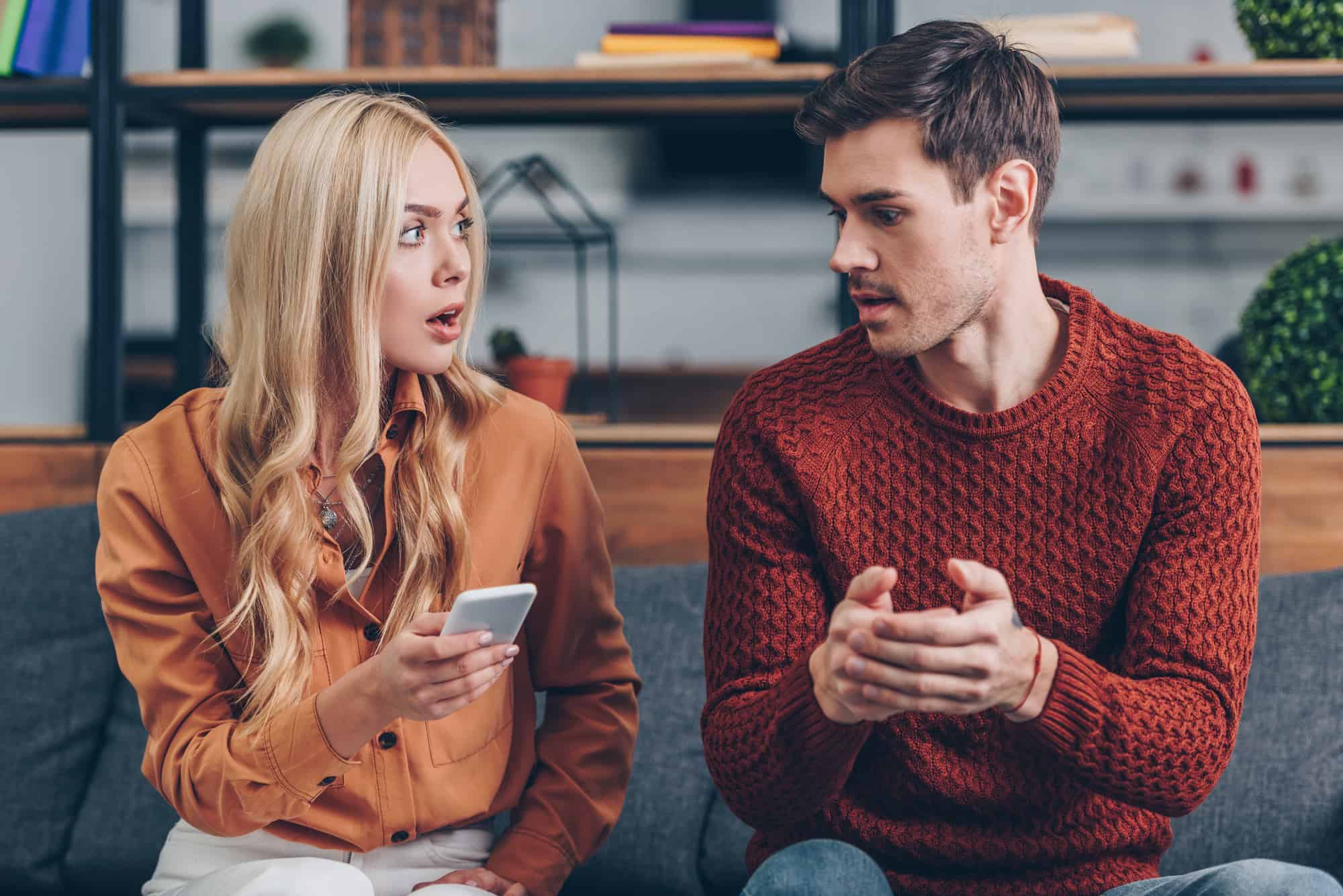 Is He Seeing Someone Else (5 Undeniable Signs)

Women have a powerful intuition about things like this, if you continuously feel like something is off, that’s already a sign he’s doing something to arouse such suspicions. Everyone wants to feel special, wanted, and loved, and a lot of that comes from being the only one in the picture with him.

As soon as you begin to sense you’re not the only person on his mind, anxiety kicks in. If you’re not careful, it could consume you to a point where you become sneaky, looking for signs he’s talking to another girl. Going back and forth and scrutinizing every scenario like a cop, hoping to get him red-handed, it can drive you insane.

It’s not fair to be treated with such disrespect; like you’re not enough, if he doesn’t want to be with you, there’s a decent way to end things, he shouldn’t feel like he’s doing you a favor by staying yet cheating.

I feel like every lady should have this list in their arsenal, so we know when a man is being shady, and when to address the issue.

That he is acting differently towards you is one of the first things women consider to mean that a guy is cheating. It's not entirely true, but it does indicate that something is wrong, a change in attitude could mean a lot of things from pressure from work, health challenges, or even a mid-life crisis.

If he doesn’t want to talk to you, starts hanging out with anyone else but you, then some questions have to be asked. This change can come at you gradually, so you might not notice the initial stages, but you'd figure out things are not as they used to be.

He's not as excited as he used to be around you, but he seems alright when he's away. The response to your touch isn't as quick, and he would choose time away from you more than usual. Your attempts to reconnect with him would begin to seem like a bother.

A change in body language is the mother of all signs, as every other one is a fragment from it. If you have issues with what this withdrawal means, talk to your man about it, it's the best way to gain clarity.

This is a tough one to accept, and whether you agree with it or not doesn't make it less of a sign. No matter how shy a man is, if he likes you, he will muster the courage to ask you to be his girlfriend or at least let you know that's what he wants. The man that avoids being exclusive, you can tell from his dubious character that he is keeping his windows open for other girls.

If he doesn’t want to commit, it’s no surprise if he misbehaves no matter how enjoyable the dates you go on are or how intimate you get with each other. I suggest you deal carefully with this type of man. He is very dangerous and can suck you in before you know it.

At least keep your opinions open too if you want to go on with him, it's only fair that you do so until he summons the courage to make you his girl. If you sleep on this sign, it'll be too late to get out, as soon as you smell uncertainty, get yourself ready to get out of there at any time because that's probably what he's doing too.

One of the signs he’s unfaithful is when he starts getting upset over little things you both could've easily talked about. At some point, it might get chaotic and seem like he’s purposely trying to misunderstand you.

You both should take time out and figure out if the entire relationship is worth it, especially you. If you don't have that connection with your man anymore, something is up. Talking with him about it is an excellent place to start, just to avoid assumptions, let him know how you feel about the communication breach, and listen to his reply.

It's not easy to hold the attention of two people or more than one person, especially romantically. One would always be above the other, and that's what causes the communication traffic. If you use to talk or text every day over social media and suddenly he's not feeling it anymore, there's a chance he's talking to another person.

It's true if he's being sketchy, he would become less intimate or passionate about spending time with you. Even if you both get around to doing anything together, it would feel very off. If he isn't getting some with you but seems pretty okay about it, what are the chances he's not getting it elsewhere?

I mean, you can't tell he's cheating without concrete evidence, so you have to be careful about this before you look like a crazy person. Just like it's difficult to manage communication with a lot of people without focusing on one more than the other, you can't go around getting intimate without splitting your attention in a lot of places.

If you watch him carefully, you will notice he starts to give mixed signals, one day, he feels like it, the next, he would rather not be around you at all. Sometimes even when his body is right next to you, his mind isn't. I'd just put it out there that whether or not he's cheating, this might be a good time to give him space.

5. He talks about this other girl

There's a way a man would talk about another lady, and you can tell it's beyond pure admiration. If he brings her up at every opportunity, he has compared you to her on one or two occasions and even spends time with her as well, it's fishy.

If you guys aren't exclusive yet, you can ask him about it, there's no need beating about the bush or getting worried over his feelings. You need to know what you're going into, and asking gives you answers.

If he's your boyfriend or partner, be a little careful about it, you don't want to make a mountain out of an anthill, trust me. Plus, he would get very defensive about it, so you have to be ready to dig deep and get to the bottom of this. If he starts giving flimsy excuses and doesn't tell you where he's going, watch it.

How do you know he’s seeing someone else?

Apart from the gut feeling that keeps gnawing at you from the inside, there are other ways you can tell he’s cheating. His body language is a huge tell, along with his commitment level (especially with what he says). You can tell a man has other things going on with him as soon as his attention span reduces, and his body language is different as well. You could also just ask if he's dating another woman to be sure.

What to do if he's seeing someone else?

This is entirely up to you, if you don't mind being in an open relationship with him, go ahead and stay. On the other hand, if this is too much for you to bear, take yourself out of the situation. I'd say you deserve a lot better if you ask me, especially if you're faithful to him. It might bruise you eventually if he’s seeing another lady, while you’re being faithful to him.

Are you seeing someone else Meaning?

It means you're not exclusive to your partner, both of you are just together but are not bound or exclusively committed. It becomes an open relationship if you're both okay with seeing other people but agrees to always be with each other regardless.

How do you know if your boyfriend likes someone else?

Well, there's no straight route to this discovery unless he wants you to know what's going on. At best, his body language will change; he won't give you as much attention as he used to before and he’s status or posts on social media won’t indicate he’s dating anyone. These are basic indications that he’s probably trying to, or already dating another lady. If he's sneaking around you and getting upset over little things that another pointer.

When a man is being distant?

It could be a lot of things, even though most times it ends up being one thing; he likes another girl. Let's give each man the benefit of the doubt; they are human beings after all, and there could be a thousand and one other things going on with him that have nothing to do with cheating, like stress. Men get distant when they are faced with a challenge, it's a way to be at peace and strategize the next best move to make.

To Put It All Together

Everything feels off when a guy you’re in a relationship with starts drifting away or acting shady, and if you see these signs above as well, you should act fast on this fast. I would like to know your thoughts in the comment box below, and please share this article with your friends too.

One comment on “Is He Seeing Someone Else (5 Undeniable Signs)”

You May Also Like
How To Find Out If Your Boyfriend Is Cheating On His Phone (5 Sneaky Ways)
1 Comment
Cell Phone Signs Of A Cheating Husband  (11 Unfaithful Signs)
1 Comment
How Do I Find Out What Websites My Husband Is On? (10 Effective Ways)
7 Comments