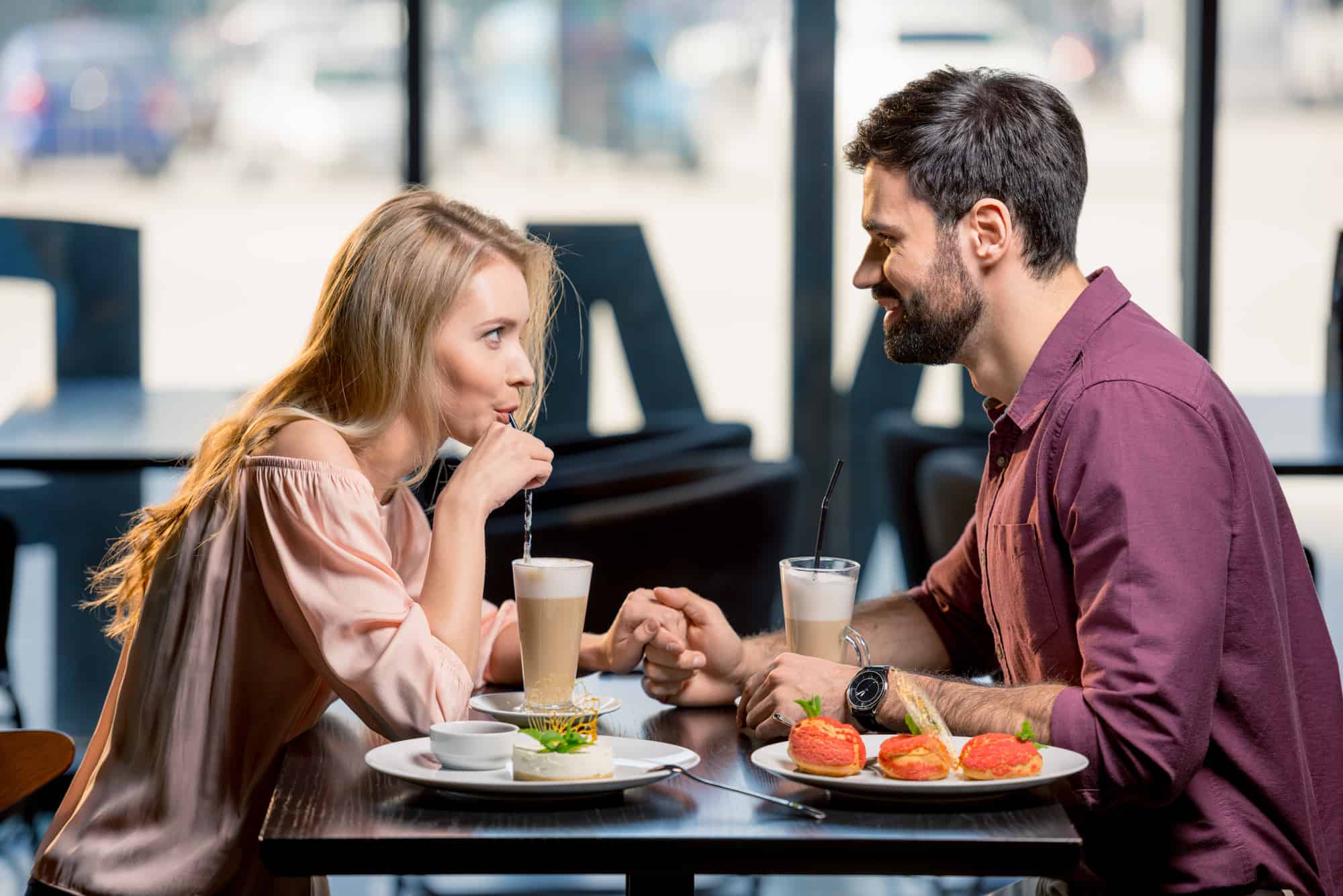 There is nothing like the feeling that intense chemistry can give you. Everything is intense, from the eye contact to the feelings that you get in the pit of your stomach. When the two of you are in the same location, it’s like no one else is around.

This connection catches you off guard in the most amazing way possible. I’ve had intense chemistry with two people in my lifetime, and it was truly unforgettable. One of them, I still do. I moved and we keep winding up in the same location, over and over again. It’s unexplainable bliss.

Chemistry is something that you might have with someone, and not even know it yet. If you have intense chemistry or want to know if you do, watch for these 17 signs. These are also a great way to tell if someone feels the same way about you!

Just because you have that mysterious feeling that can only be explained as chemistry doesn’t mean that it’s mutual. Keep an eye out for the same signs to determine if he feels the same about you.

The two of you are drawn to each other. When you’re in the same room, you slowly gravitate towards one another. Usually, you don’t even realize that you’re doing it.

For example, you’re both out with friends. Suddenly, you realize that you’re dancing in his direction. You look towards him, and he’s already watching you and smiling ear to ear. He might be accidentally moving towards you too.

The first time you touch someone that you have intense chemistry with, you’ll feel a spark. It can catch you off guard, and it can make touching feel weird compared to other people. It’s like you know something is there, but you can’t put your finger on it or come up with a logical explanation.

3. Other people notice it too

You might not realize it, but when you have intense chemistry signs with someone else, other people will easily notice that you have a connection. Your friends and family will be able to feel the tension in the air and pick up on how you act differently around one another.

They might not say anything. Yet, you will still get an awkward side glance. Your friends might tease you about him because they know that you like them. If the man is married or in a relationship, expect some not-so-nice glances and comments when other people notice how much chemistry you two have together.

4. Everything can feel awkward at first

With intense chemistry, you’re suddenly attracted to this person, and you don’t always know why. You might not even know them as a person. It can make speaking to them feel awkward at first as you try to decipher your feelings or figure out if they like you.

This is because your subconscious knows that you like them a lot. On the other hand, your brain can’t seem to make sense of it all. It doesn’t seem logical that you would like someone you just met so much. It can help to stop trying to figure it out. Part of the beauty is the mystery behind it.

5. Then, it flows naturally

Once you get used to the random sparks every time you touch each other, everything else flows naturally. You don’t have to force conversation with this person. Instead, you instantly find yourself laughing at all of their jokes and talking about values together. Sharing intimate things with them doesn’t seem hard.

This is one of the biggest intense chemistry signs to watch out for. With them, everything feels intense. That includes seemingly minor things, like eye contact. It can be so intense it’s almost uncomfortable.

7. You have a special vibe

It can be hard to explain that you have a special vibe with someone you barely know, but that’s what happens when you have chemistry. The two of you feel weirdly closer than you do with anyone else, even friends that you’ve known for years.

8. You both have the body language of attraction

When two people are attracted to one another, they display certain body language. The more signs of chemistry that are there, the more people will show these signs without realizing it. Some common examples of body language of attraction include:

Both men and women show that they are attracted to someone in their own way. When there is chemistry between two people, you can see the connection in their body language. For a comprehensive guide on the subconscious things that men and women do, check out this article.

9. You have more butterflies

A handsome guy might give you butterflies, but when you have chemistry with someone, you have thousands more butterflies than you normally would. It can send your stomach in somersaults.

10. Staring has become your second hobby

The two of you keep finding yourselves staring at one another. You might look away as soon as the other person notices, but the eyes do not lie. If your gaze is drawn to him, or his gaze is drawn to you, it’s a sign of chemistry between two people.

11. Silence is not uncomfortable

Check out these signs of infatuation. The more of them you can relate to, the more likely you are infatuated with someone. Most people have a hard time understanding that they feel like this with one another if they barely know each other, but trust me, it’s possible. It’s also pretty likely to happen when you have strong chemistry with someone.

13. You focus on each other

Even when you’re talking to other people, the two of you hear what the other one is saying. You know what he’s wearing from across the room. When you have a connection with someone, you always seem to have them in the back of your mind. This means that you are the one always giving them feedback during group conversations, etc.

14. You can feel their eyes on you

When you’re in their presence, you can tell that they are there by the immediate chemistry in the air. When they look at you, you can feel their eyes on you. Often, you’ll feel them looking at you before you realize that they are in the room with you. It’s almost like having a sixth sense.

Chemistry has a way of taking over your mind. Every possible thing you can experience with this person, you want to. You quickly find yourself arranging get-togethers with mutual friends so that you can invite them along. You go to a different gas station so that you can “accidentally” run into them. If there’s a reason for you to see them or a way to contact them, you can’t help but use it.

Three hours feels like three minutes. You get lost in the conversation because you have so many things in common. Neither of you wants to hang up the phone first, either. It’s easy for both of you to find a way to keep the conversation going so the other doesn’t hang up. When you have chemistry with a person, you don’t realize that you’ve spent the whole day with them.

When you have chemistry with someone, everything is a complete mystery. That’s simply part of the experience! You don’t have to have known a person for years in order to have something special for them. Instead, you can be absolutely nuts over someone that you just met yesterday. Researchers have attempted to find the science behind it all. Here’s what they came up with.

For a man, chemistry is an exciting throb that starts when they are around the other person. It can make their hearts race, make them feel nervous, and even give them butterflies. Yes, men get butterflies too! Chemistry can also feel similar to lust for a man.

What causes intense chemistry with someone?

This feeling is caused by several factors coming into play. It involves a mutual attraction in the beginning as well as trust and having similarities. Communication also plays an important role in two people having chemistry with one another.

How do you tell if there is a spark between you?

You can feel it when you touch each other. There is something in the air whenever you are around each other. Usually, this is something you’ve felt with no one else before. More than anything, a spark can quickly turn into infatuation.

Intense chemistry is usually mutual, but there are exceptions. He might remember every detail about you while you don’t even remember the color of his eyes. These situations are less common, but they do happen. Because of this, it’s important to make sure that they show other signs of attraction.

When a man is fighting his feelings for you?

He stares at you and is protective over you, yet still ignores you on occasion. When a man fights his feelings for you, he will be hot one minute and cold the next. It’s because he can’t help but feel a certain way because of those feelings, even if he doesn’t want to.

Intense chemistry is something that can be hard to come by, but that doesn’t mean it doesn’t exist. Have you ever felt that way with someone? How did you know what it was?