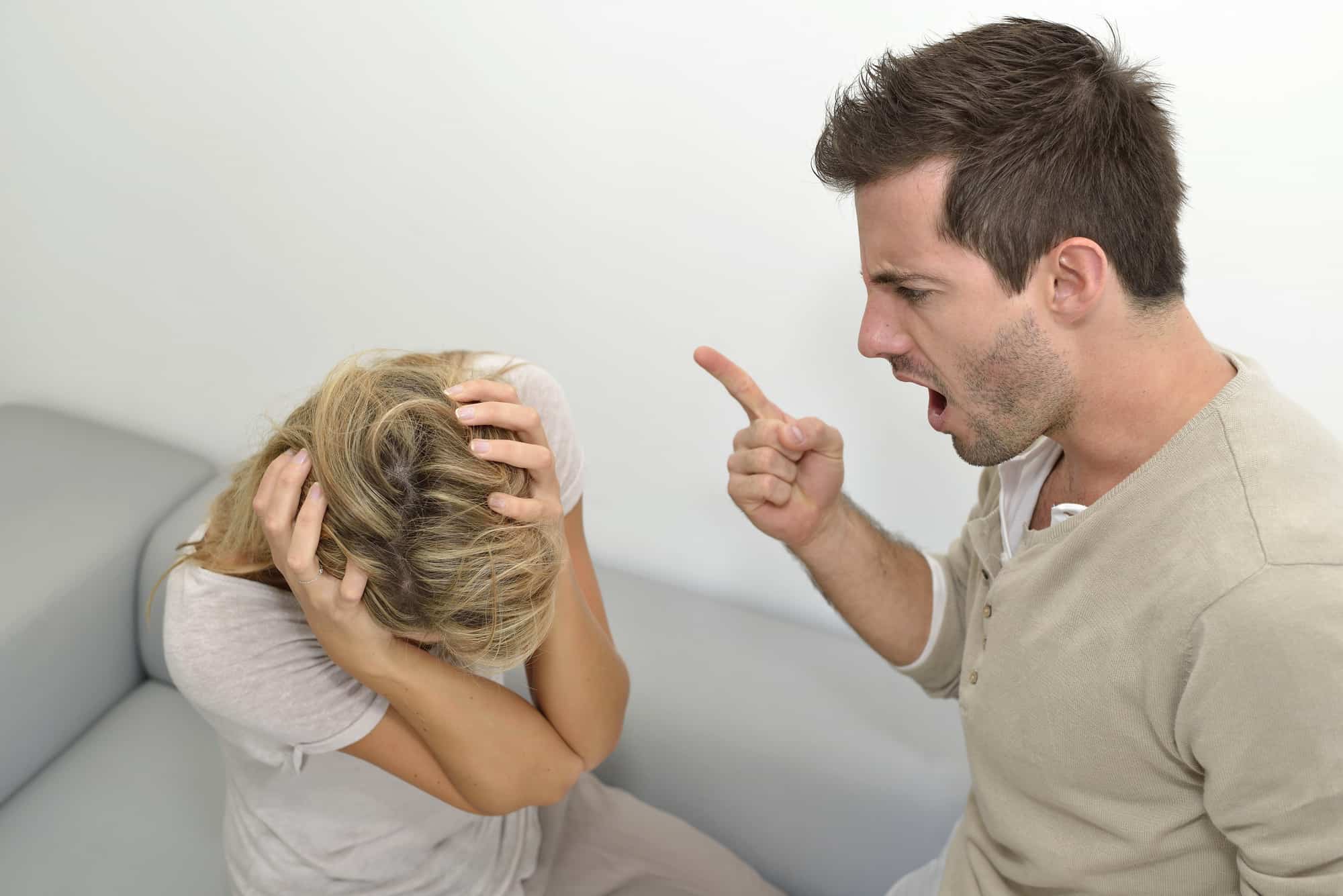 Is your husband always yelling at you?

Is it having a serious impact on the way you feel about him?

Do you want to know how to handle the situation?

This guide is packed with ideas on how to deal with this problem as effectively as possible.

If you think he’s genuinely miserable with the marriage, or he’s yelling at you to deflect from the dodgy stuff he’s doing behind your back, I have a recommendation for you.

After entering a few of your husband’s basic details, it’ll be able to connect with his personal devices - and deliver a huge database of information based on his communications.

You’ll see who he’s messaging, how often, what apps he’s using and much more. If he is up to no good when you’re not around, this tool will show you pretty quickly.

Regardless of what’s causing your husband’s yelling fits, you don't deserve to bear the brunt of his rage. Read on for helpful tips that will help you deal with the situation.

7 Ways To Handle The Situation

1. Reject the attitude from the onset

You're his wife and deserve the utmost respect, not degradation. You may find that your husband often feels embarrassed about his anger right after the act. It is even possible that he would feel physically drained and regretful after the whole fit. You’ll end up being the one to put up with the gloomy atmosphere and this will affect everyone in the family.

One of the ways to let your husband stop yelling at you is to reject the attitude from the moment you discover it. You have an argument and before you can say, “Jill,” he's already raising his voice so he will be heard above you. This should be a no-no because you are in a partnership and both of you should listen to each other.

If he should relate with you as a person, and calmly get his points across, so sternly let him know that you don’t appreciate the attitude. If he respects you and was only acting out of unusual anger, he will listen to you and adjust.

2. Accept that you don't deserve to be yelled at

What you allow continues and that's the fact. If you don't speak against his behavior, then he will do it next time until it becomes a norm in your home. You're not a helpless sounding board he can test the strength of his voice against, you’re a person that deserves respect.

Your thoughts and feelings should be aligned with this truth before you can hope to properly deal with your husband's anger issues. whether you burnt his food, forgot to run an errand, or make payments, he can fuss about it without yelling at you. However, if you feel it’s okay for him to do that, then you’re facilitating his behavior.

Don’t keep taking responsibility for his foul behavior, your self-esteem will suffer for it.

3. Ask yourself some questions

This requires that you have accepted you aren't responsible for or deserving of his rage attack. In fact, this is the only way you will be able to assess his behavior from a logical perspective.

Try to understand the ‘why’ and ‘how’ of his anger. Ask him how his day went and what put him in a bad mood.

At this point, he must have cooled down and realized it wasn't the dirty dishes in the kitchen sink that made him angry. Something else was at the root of his anger and the dirty dishes only acted as a trigger for him to explode. Another thing to process is whether he displays such a level of anger to other people outside or if it's only reserved for you.

Does he throw things or smash his fist into the wall when he is angry or he only raises his voice? Knowing all these things will help you know how to best approach the situation. You'll be able to know if you can appeal to him by yourself or he needs professional help.

4. Let him know what he's yelling is doing to the marriage

Nothing good is said in the heat of anger. Your significant other will certainly not tell you how beautiful or amazing you are while he is screaming at you. That goes to show that such behavior solves nothing. You know this but you need to tell him too, inform him what his actions are doing to you, and the possible implications on your marriage.

After he is done shouting, tell him how his shouting affects you as a person, how it makes you feel unimportant, unheard, and inferior. He may not like that depending on the kind of man your husband is. It will touch him if he either dislikes making you cry or it embarrasses him when he makes you cry. The important thing is that you voice out how his behavior made you feel.

5. Do your best to calm him in the heat of his anger

Some people don't completely agree with trying to calm a man in the heat of anger because he doesn't want to hear anything at this point. He wants to scream and yell because he thinks that's the only way to assert his superiority over you.

However, when there is a break between him venting, chip in some sensible comments that will make him calm down. Remember, you might not be responsible for why he is angry and he could certainly have expressed his displeasure in another way even if you offended him.

Trying to pacify him is not because you think you deserve to be yelled at, but because you love him, want him to be happy, and want a peaceful home. You could even say you're trying to be the better person and taking the high road to peace-making. The important thing is that he becomes calm and you both can then discuss reasonably.

6. Leave him to let off the steam

This is like the simplest option but Leon F Seltzer thinks it can be dangerous and set off the man if you walk away during a hot argument because angry people don’t want to be ignored.  They need to vent and be heard while at it.

However, because what your husband says in the heat of the moment can be damaging, it is sometimes best to walk away. If at any point you feel like you can't take the heat anymore and you're on the verge of responding in like manner, it is better you leave the space for him. After he is calm you can air your views, and no one will get hurt.

7. Encourage him to try therapy

This can be the last resort because many people, especially men, don't like to accept that they have anger issues, and suggesting therapy makes them angrier at the idea that something is wrong with them.

Like any other method, you may try in the process of helping your husband to stop yelling to prove a point, suggest a therapist in a way that still makes him feel in control of the situation.

If you have kids, remind him how that kind of energy could affect them if he doesn’t stop. You could also let him see that the situation could morph into him turning you into a punching bag soon, and that would be the end of the relationship.  If he loves you genuinely he won't want to be responsible for the destruction of the family.

How do you deal with a shouting husband?

There are different ways to deal with a man that shouts a lot. One way is by not shouting in return because two people arguing won't hear each other out. So, try listening to what he has to say without provoking him to shout more. When he realizes he is the only one going at it, it'll come to an end.

Is it normal for a husband to yell at his wife?

No, it is not. When something is normal, it means it can be done every time. A mistake is when you do something once and you realize you don't ever want to do it again. A man who constantly yells at his wife will soon resort to hitting her.

Why yelling at your spouse is bad?

When you yell at your spouse you're disrespecting them, and no one deserves that. You're telling them they don't deserve to be spoken to like a normal person. It is bad for you too because it will end up leaving you stressed out, tired, and maybe even heartbroken if they decide to leave.

Why does my husband yell at me so much?

He could be projecting his frustration at something negative happening to him. He could be bottling a lot inside him and when he eventually erupts you're the closest to him. While his behavior is bad, it is always good to try to understand why he is acting that way.

What is disrespectful in a marriage?

Disrespect in a marriage can come in different ways. One of them is yelling at a spouse. It can be a result of bad communication skills or an actual anger problem. When one party refrains from voicing out when something unpleasant occurs, it will build up and the outcome is usually bad.

Yelling doesn't prove anything good and as a woman, you deserve better than to be constantly yelled at. I hope these tips help you deal with the situation better. Do drop a comment for me on what you think and invite someone to read this too.