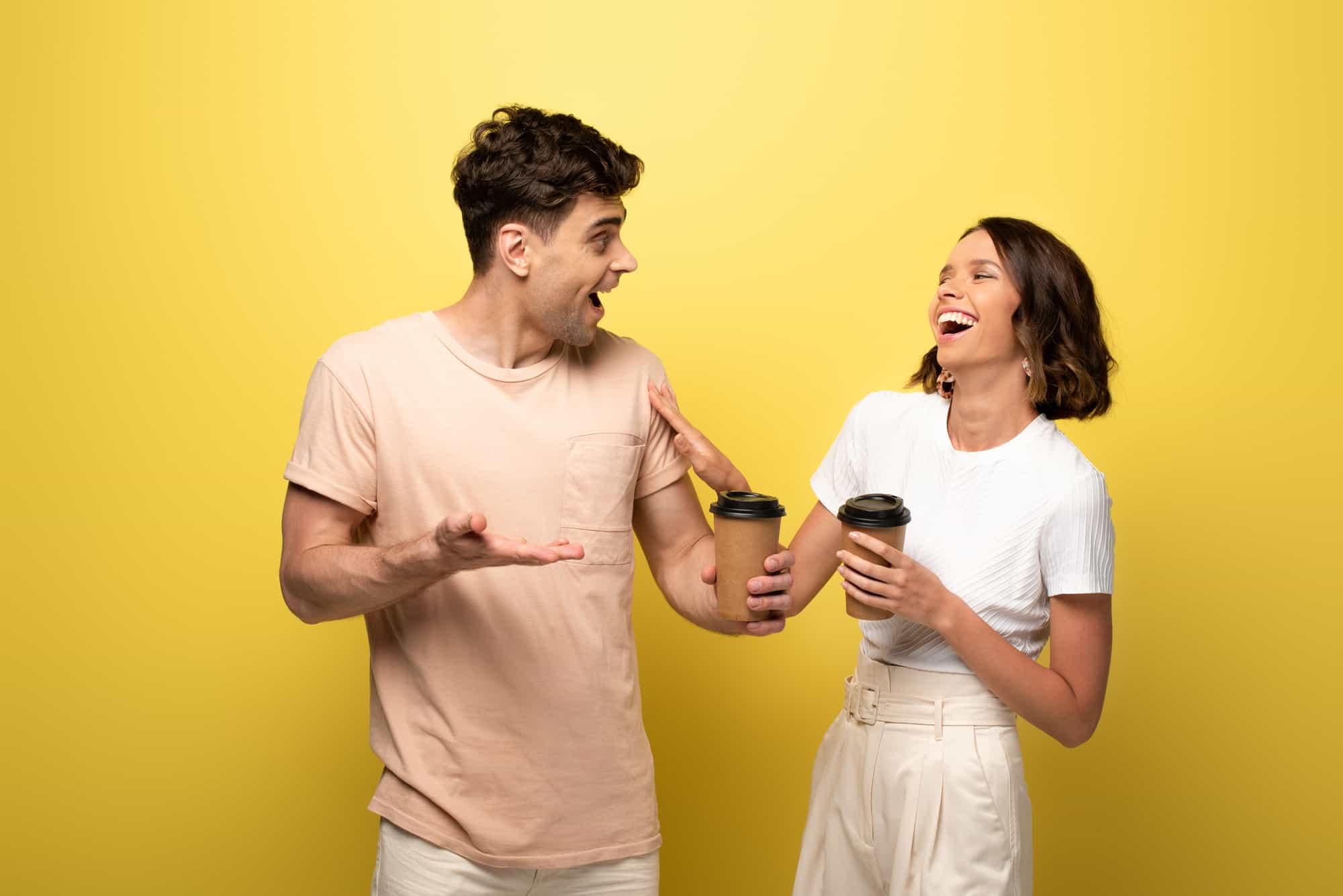 If you're honest with yourself, you would agree it makes you feel good when a guy you like gets a boner around you. You start thinking up stuff like ”He likes me” ”He wants me” ”I’m hot”. That generally takes your confidence up a notch. Especially when you’ve been trying to figure out how to tell if a guy likes you.

However, you should also know guys can get hard over a lot of things. In fact, the circumstances surrounding the hard-on points directly to why he's erect at the time. So, I wouldn't be so quick to conclude a man likes me ”because he got a boner” if I were you.

21 Ways To Figure Out If A Guy Is Hard

I know, it's not such an ”undercover” way to tell he's got a boner, but it's one of the most effective, less creepy methods. Some men get embarrassed by this; so you might not get a direct answer, but his body language after the question would tell you everything you need to know about what's going on in his pants.

Please do not touch a stranger’s hot-rod. This only works with your boyfriend or partner. If the goal is to turn this man on, touching his penis over or under his pants is the best way to find what you're looking for. Observations take a little more time, but touch is proof. Touching a man's body a lot, even in a non-sensual manner, can cause a hard-on.

If, for no particular reason, this man has his hands or any other random item covering his crotch while he's around you, he is probably hiding a boner. As I said, some men are embarrassed by this type of thing. It's a lot more visible if he's wearing loose trousers or sweatpants; that's why he's covering it.

When you're making out and rolling over with a guy, there's a likelihood you both get turned on by that activity. When guys get turned on, there's a boner to show for it. This means during physical intimacy; guys will get a boner because it's a natural reaction to what's going on at the time. An erection is also a sign that he likes what you're doing.

It's not myth honey; guys do wake up with boners. This is one of those situations where it's not about him being aroused by anyone or anything in particular, he just woke up like that. It doesn't happen all the time, and it's less with older men. A good time to spot an innocent boner is when your man just gets out of bed.

Guys have opened up about boners being very uncomfortable in tight pants. Do you notice him adjusting his pants over and over? He probably has a sturdy boner. Does he look stressed out in that sitting position? It's perhaps the boner as well. If he keeps going around to fix or shift something around his crotch area, he's most likely dealing with an erection.

This is one of the typical things a man would do to hide an awkward boner from a woman he likes. Just like when he covers it with his hands, when he sits with his knees up, he's also trying to conceal a bulge in his pants. However, don't put all your money on this sign; some guys just find it a comfortable way to relax while sitting.

It's impossible not to feel a boner rub against you when it does, if he’s dancing with you or hugging you, it will surely be evident. It’s one way to tell when guys have an erection, a boner would be so easy to detect in that kind of close-up situation with a man. There's no surprise he's erect if you are close enough to feel it.

Some boners just can't hide (which says a lot about his tool). This also depends on the type of pants he has on - either it's loose or too tight. When you notice a bulge in his pants, that's a boner. The thing about this bulge is, it has to move around with him for you to be sure it's a boner. If not, it could just be his pants bunching in a way that makes it look like he's erect.

11. He Sticks His Hands In His Pockets

Keeping his hands in his pockets is another one of those typical signs a man is trying to hide a boner. He most likely did this while standing or perhaps walking by a group of people. The hand is in his pockets to control the rage down there and make himself feel more comfortable as well. If those hands stay in there awkwardly and don't leave his pockets for a while, he's taming a boner.

A shy man with a boner would try to keep you away from that area. He wouldn't want you sitting next to him or any part of you brushing against his crotch, so you don't feel it. While talking or flirting with you, he would look you in the eye to make sure your gaze stays on his face and not dart it anywhere else.

When you're flirting with a guy and vice versa, it could get heated and turn you both on. Best believe that if you are turned on, he is as well and, of course, has a boner to show for it. We all get aroused by the consistent thought or idea of sex. By flirting with a guy, you're sort of asking for it. It does feel good when you turn your partner on by flirting.

Enough about shy or embarrassed men. Some guys don't care that they have a boner at all. Most of them are proud of their manhood size and want to show it off to you. As I said, a random boner is creepy. From your partner or boyfriend, it's acceptable (if you're up for it). A man you're with would simply show you the boner when he wants some.

Another very non-sensual moment for a guy to have a boner is when he wants to pee. He would surely have a boner then. Sometimes, men use this fact to hide an erection. So, pay attention to his body language the next time he says “just give me one minute, I need to use the restroom.”

Well, there is no need to guess anything if there's nothing between your eyes and his manly spatula. You can tell just by looking at it that it is erect, and probably ready for action. When you’re in the same room with a guy you’re dating, you’ll tell he has a boner if he gets naked in front of you.

I'm not sure how true this is, but some women say they can smell a boner when it's up. I'm assuming that would have something to do with if the man lets out a little juice. However, I'm giving you all the methods there are to tell he has a boner, so count smell in!

This could be embarrassing, weird, or funny, depending on the situation. Imagine going out on a date with your friends, and one of them points you to a man who's trying to hide a boner while talking to his partner, awkward right?

19. When He Randomly Talk About His Mother

There's something called the “naked mom” trick amongst men. They put up a mental image of their mom nude to suffocate the mood. Other men just mention their mom in the middle of a sensual conversation or just out of the blue to get rid of the boner.

20. When He's Looking For Ice Cubes

When some parts of his trousers are wet (he would probably say water spilled on him), he threw some ice in there to get rid of a boner. That’s how you can tell if he was aroused but tried to manage the situation.

21. Puts Up A Distraction

If he's holding something like a box of chocolates, flowers, and irresistibly good things around his crotch, he may be hiding a boner. He’s probably trying to get your attention off what’s really happening down there.

Guys like to be asked questions that make them feel manly. If a guy can help you accomplish a task, he’ll love you to ask him for help. Guys also like questions about their favorite things, favorite places, food, moments, football clubs, etc.

How do you test a guy to see if he really loves you?

The most common way to test a guy on his love for you is by observation. It would help to pay maximum attention to what he says, what he does, and, more importantly, how he acts around you and others. If there’s disunity between these three, his feelings may not be genuine.

How do you know if a guy is having trouble?

What are juicy questions to ask a guy?

Asking a guy his thoughts on sex and what turns him on are juicy questions he’ll like to hear. You can also ask him about his bedroom fantasies and what he would like to try with you.

Why do guys avoid answering questions?

Guys avoid answering questions that they feel have sensitive subjects. If he knows you won’t like the response to the question, or it’ll make you emotional, he prefers to avoid having the conversation at all.

Well, that's that on how to know if he got a hard-on, I doubt there's more on the subject. Let me know what you think about this article in the comment section and please, educate someone else about “boner dictating” by sharing, thank you!