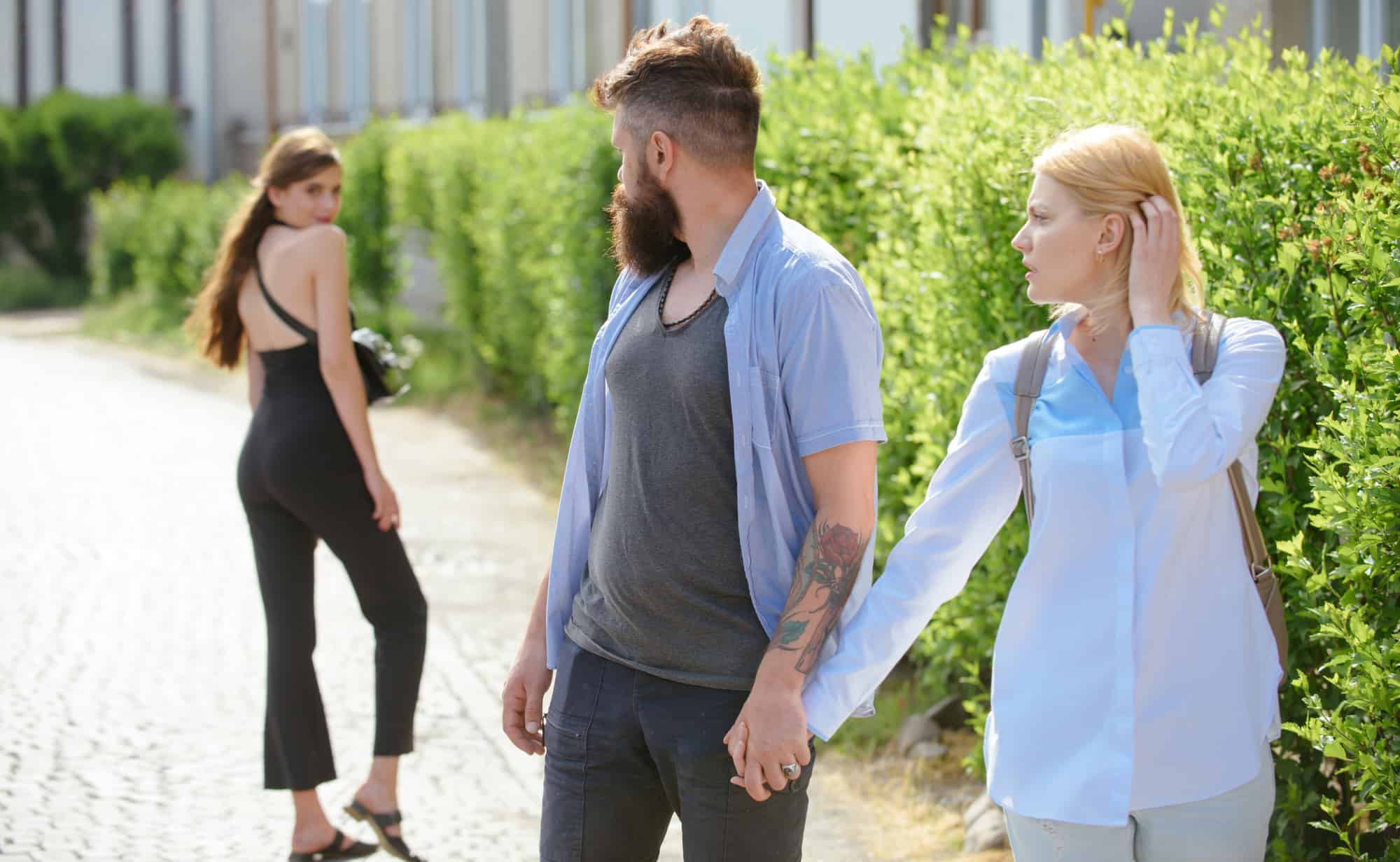 You can’t help but notice the glares when you’re hanging out with your friend from his new girlfriend. The way that her tone changes when she speaks to you, or the way she doesn’t speak to you at all. Then, there are the ways that she acts insecure. It all points towards her being jealous of you.

It can be hard to understand why she would be jealous. She’s the one in the relationship, and he’s obviously not your partner. She might be jealous because she’s insecure in herself or in her relationship. It could be that she’s misreading signals between the two of you. If you want to stay friends with your ex, it’s time to get to the bottom of things.

Why Is My Ex-Boyfriend’s New Girlfriend Jealous Of Me?

If you’re thinking “my ex-boyfriend’s new girlfriend is jealous of me”, the next thought is usually wondering why. There are quite a few reasons that she could be jealous, and some of them are completely understandable.

1. She picks up on unspoken feelings

If you or your ex still have feelings for one another, she might notice that. If your ex wanted to get back together, she may already know that he has feelings for you. It can be pretty crappy to be with someone that is still thinking about something else.

If she notices you being flirty with him, she might be under the impression that you are the one that wants to get back together. If she thinks you’re trying to get with her man, she might be a bit protective over her relationship.

2. The two of you have children together

While she might not be mad at you for having a child with her now-boyfriend, as she probably didn’t even know him then, she doesn’t like knowing that you’ll be a part of his life for the rest of his life because you have a child together. Women that have never been in this situation before take longer to adjust.

When a girl has low self-esteem, this shows up in jealous behaviors. Obviously, her boyfriend loved you at one point. She compares herself to you, whether it be looks, work ethic, or something else. Then, she wonders if she measures up. If you have long hair, she wonders if he’s really happy with her short hair. Jealousy makes people act this way. It is often rooted in low self-esteem.

4. She doesn’t trust him

If he’s cheated in the past, or lied, such as keeping your friendship a secret in the beginning, she might not trust him. She may be under the impression that he is trying to cheat on her. Just because he’s your ex doesn’t mean that he might not try to be intimate with you like he did other girls.

5. He’s making her feel some type of way

He could be using you to manipulate her. Some men view jealousy as a sign of love, so he might say things about you to make her feel that way. He might compare the two of you, or talk about how his life was when you and him were together. This can make her feel insecure about both herself and her relationship.

1. Have a conversation with her

If your ex-boyfriend was manipulative in the past, avoid having a conversation with him if possible. Instead, try to have one with the woman. Tell her that you’re glad he found such a great girl to be with, and ask her if she is okay with the two of you being friends.

This shows that you respect her as his girlfriend. It can also open up to a deeper conversation, and you can explain to her that even though he is your ex-lover, you have no interest in being in a relationship with him again.

2. Take a look at your own feelings (and his)

It’s important to be honest with yourself when you take a good, hard look at your feelings. Maybe you flirt with him but don’t realize it? Perhaps you get a twinkle in your eye and smile more when your ex-boyfriend is around? It’s time to own up to whether you’ve been fantasizing about getting back with your ex since the break-up. She might just be right...If she is, move on.

If you’ve thought “my ex trying to make me jealous”, he might be up to something. Your ex could be using the new girl to try to make you jealous because he misses having you in his life. If he compares the two of you when you’re on the phone or makes comments that he misses you, it’s time to re-evaluate your “friendship.”

4. Don’t beat yourself up

If you have no feelings for your ex, and you are both strictly platonic friends, and you’re not feeding into manipulative behavior, you have nothing to feel bad about. Some women are consistently filled with jealousy.

The second they get into a relationship with someone, they are jealous of the women that were in their boyfriend’s life before them. They stalk pictures of the most recent ex-girlfriend, ask questions about the break-up, and judge anything possible.

Unfortunately, no matter how hard you try, there might not be something you can do about it. In this situation, don’t feel bad about it. You did what you could, and you and your ex are not doing anything wrong.

5. Don’tfeed into her crap, either

She might be immature and craving attention. If you cannot get to the bottom of this, it could be because you’re already giving her what she wants: attention. Women like this never stop until they are mature enough to stop on their own. Accept that there are people like this, especially women (women are known for being in competition with each other more than men), and let it go.

If at all possible, ignore her. Don’t bat an eye at the sideways glances. Stay polite when she changes her tone, but only when she is talking to you. Remain calm, cool, and collected.

Why is my ex's new girlfriend jealous of me?

Jealous people often have low self-worth. This can and does, spill over into their relationships. She compares herself to you and wonders if she measures up. She wonders what he saw in you. She could also simply despise the fact that he had feelings for someone else before her.

Is it normal to get jealous of your boyfriend’s ex-girlfriends?

No, it is not. You are his girlfriend, not her. She is his ex for a reason. Letting jealous behavior consume your relationship will only result in it being full of conflict and ending sooner instead of later. Learn where your jealous feelings come from and address them asap.

How can I make my ex's new girlfriend jealous?

If you’re out to make her envious, don’t be obvious about it or it won’t work. Dress your best from head to toe, and always look runway ready. Be fun, happy and bring up your accomplishments in conversation sporadically.

Will dating someone else make my ex jealous?

If your ex still has feelings for you, it will make your ex feel some type of way to see you with someone new. If you’re not sure, watch the way your ex acts after you announce your relationship. This will tell you everything you need to know.

Why would my boyfriend's ex block me?

She blocked you because she still has feelings for her ex, and doesn’t want to be reminded that he has a girlfriend so quickly. She could also feel insecure, and comparing herself to you only makes it worse. An insecure woman doesn’t want to be faced with “my ex has a new girlfriend” every time they log onto social media.

e all get envious of a girlfriend or ex-girlfriend at some point. Personally, I felt insecure about myself and looked at their shortcomings as validation. I had to solve that on my own. Have you ever felt this way? What was it that was motivating your behavior, and how did you move past it?

You May Also Like
What Does It Mean When A Guy Talks About His Past Relationships? (9 Baffling Things)
No Comments
What Are The 6 Rebound Relationship Stages?
No Comments
Remarrying Your Ex (11 Things To Consider Before Going Down That Road)
No Comments