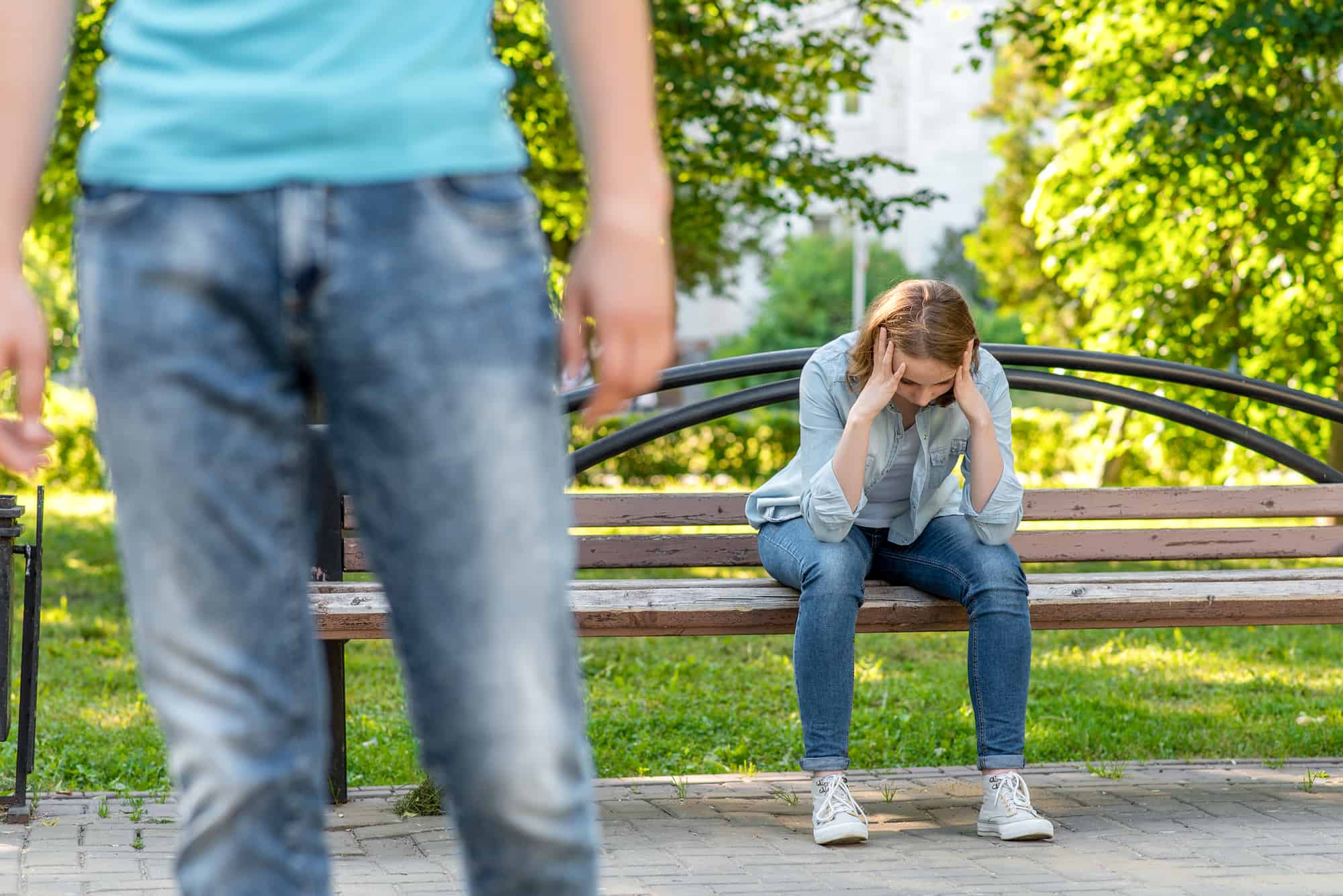 Benching Dating (What It Means & 15 Signs It’s Happening To You!)

There are so many new terms popping up constantly in the modern dating world, and one of the newest is benching. Although you might have thought that someone ghosting you was the worst you might encounter in the dating world, unfortunately, benching could just win first place.

Benching occurs when one person will act as if they like you, flirt with you, continue to lead you on, and keep you interested whilst very much keeping you on the sidelines, just in case things don’t work out with the other people they’re dating.

It’s really difficult to deal with getting benched because it’s manipulative and your feelings for someone can still grow whilst they bench you and they move onto someone else. However, one of the most awful things about benching is that people rarely realize it’s happening to them and therefore they stay on the bench for someone that doesn’t care about them, rather than moving on with someone else.

In this article, we’re going to take a look at 15 signs that will be showing if you’re being put on the bench or if you’re already there. It’s essential in the modern dating world to know what these signs are so you can avoid being benched at all, or you can figure out what’s happening and put a stop to it as soon as possible.

1. He acts hot one minute, then cold the next

One of the most obvious signs of benching in dating is if a guy acts really interested in you for a moment, then goes cold and seems like he’s fallen off the ends of the earth the next. If he’s blowing hot and cold, it’s probably because he’s intentionally trying to keep your attention whilst also giving his time to other women.

2. He makes last-minute plans with you

If someone can never commit to making plans with you but instead rings you at the last minute to see if you want to hang out, you could most definitely be experiencing benching. This guy has probably made several plans before you, but everything has fallen through and therefore he’s reaching out as you’re the last option.

3. He’s never the one to text first

Are you always the one reaching out and messaging first? If so it’s probably because this guy isn’t thinking about you and therefore he doesn’t text you first. Also, he’ll probably be trying to lure you in by playing hard to get. If you never texted this guy first again, would you never hear from him? If you don’t think you would, you might be benched.

4. He’s slow at replying or ignores you

It’s quite simple - if someone isn’t interested in you, they’re not going to make the effort to reply to you fast, and they might not even reply at all. A guy that’s not bothered about talking to you definitely isn’t someone that you should try and pursue a relationship with, and he’s most likely keeping you on the sidelines in case he finds himself not dating anyone else.

One of the main signs of benching in dating is that you probably won’t see this person very often. Instead of spending time with you, they will send you texts or messages online to keep you interested in them so that they can pick you up and put you down when they want to.

6. You never go out in public together

When you do get round to finally meeting up in person, this guy will make sure that you’re not going to public places where other people might be able to see the two of you dating together. Instead, he’ll probably ask to come round to yours late at night, very much like if it was a booty call.

7. He never lives up to his promises

When a person benches you, they want to keep you on the sidelines in case they need you to fulfill their selfish needs. Therefore, this guy will probably promise you the world, in a bid to keep you feeling intrigued and attracted to him, but then never live up to any of the things he says.

8. They cancel plans at the last minute

If a guy is benching you, he will quite frequently cancel plans with you without much warning. For example, if he was supposed to come round at 8 pm, he might cancel with you at 7:30 pm. One of his other plans will have probably pulled through and therefore he’ll ditch you.

9. He’ll shower you with compliments when you get frustrated

As soon as you get annoyed about him ignoring you or canceling plans frequently, this guy will shower you with compliments, diverting your attention away from the problem and making you feel attracted to him again.

10. They avoid talking about feelings

As soon as you bring up any kind of conversation regarding feelings, this guy will either make up any excuse to not speak about them, or he’ll very quickly divert the conversation onto another topic.

If someone is benching you, the last thing they want to do is spend time having an emotional conversation with you, and they might also be worried that you’ll see what they’re doing if you talk about the relationship between the two of you.

11. He’s often on his phone when he’s around you

Of course, if someone is on their phone around you it doesn’t have to mean that they’re benching you, as it could mean a variety of things. However, if all of the other signs are showing and he’s constantly on his phone around you, he’s most likely speaking to other people that he’s pursuing.

12. He’s never there for you emotionally

As soon as you need this person on an emotional level, they will run away as fast as they possibly can. Someone that’s benching you doesn’t want to have to deal with anything emotional and they quite frankly don’t care about your feelings, so they definitely won’t be there when you need them.

13. He’ll reach out when he needs you

Although this guy won’t be there for you when you need them, they will always reach out when they need you. They will rely on you to get them through rough nights or difficult days, without any appreciation or emotional repayment. This kind of person depends on you, but will never offer you any support.

14. There’s no evidence that the two of you know each other

If you’re being benched, no one will know that the two of you are dating or are sexually involved, and in fact, to the outside world, you might look like strangers. People won’t know about the two of you, especially not this guy's friends, and there won’t be any online evidence that the two of you are connected. This guy will want to keep it like this so he can attract other women without them knowing you exist.

15. You know he’s seeing other people

If you know that this guy is seeing other people and he’s treating you like you’re unimportant to him but you still feel like you want to be in his life, he has successfully benched you. You need to pick yourself up, get off that bench, and realize that a relationship with this guy is never going to work out.

What does benching someone mean?

After reading this article you should now understand the meaning of benching in dating, and you should be able to figure out if you’ve been benched. Essentially, it’s where someone likes you but not enough to date you exclusively, so they keep you ‘on the bench’ in case things don’t work out with other people they’re dating.

What is breadcrumbing in a relationship?

Breadcrumbing is similar to benching, but it’s more about one person sending flirty messages via text or social media every so often to keep someone interested. It’s like sprinkling bread crumbs of flirtatious behavior so you get the intended person interested in you, but you don’t have to make too much effort with them. It’s essentially leading someone on and never committing to a relationship with them.

How do you tell if a guy is benching you?

It can be quite difficult to tell if a guy is benching you but don’t panic, because after reading this article you should be aware of the signs if this is happening to you. If you’re always the one texting, he’s blowing hot and cold, he avoids any questions about labeling what the two of you have and he often cancels plans amongst other things, you could be benched.

What is submarining in dating?

Submarining, in the modern dating world, is where a person that you’ve either been sexually or romantically involved with will just disappear from your life, to then come back weeks or months later, with no reason for ghosting you and no apology.

Hopefully, after reading this article you’re aware of what benching is and you’ll now be able to tell if it’s happening to you. It’s really horrible to figure out that the person you like is benching, breadcrumbing, or submarining you, but stay strong because better things are to come and just remember that you deserve a committed relationship.

Did you like this article and find it useful? Let us know in the comments and share it with anyone you feel needs to read this.